This coming Saturday is one of the biggest nights on the Brisbane music calendar with The Blurst Of Times making its grand return after a year off in 2015. We’ve already put forth our absolute, at-any-costs, must-see acts for this year’s event (and boy are there more than a few even outside of our list). Without a timetable though, it was near-impossible to try and plan how you’re going to go about seeing everyone you want to.

Ponder no more, the official set times for The Blurst Of Times 2016 were announced earlier today. May the clashes be ever in your favour: 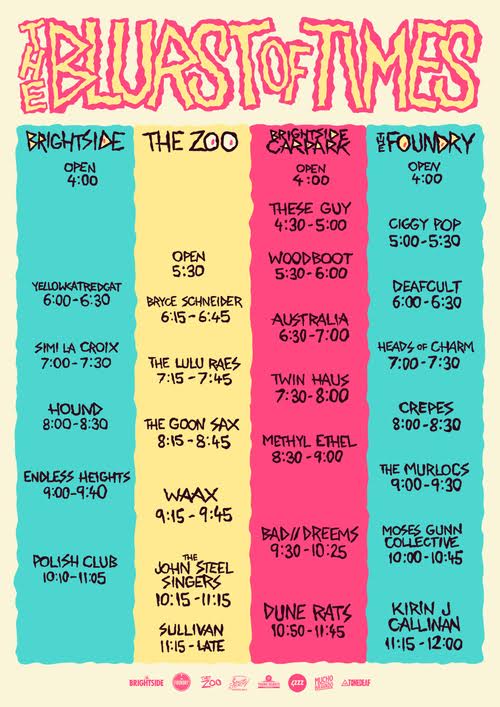 Splitting The Brightside into the carpark and indoors venue was an incredibly astute decision on the part of the festival organisers, shortening what otherwise might be a costly journey (in terms of precious minutes having to sprint between other venues for things like the slight Bad//Dreems and Polish Club overlap that had my heart racing before I realised). The clashes are mercifully minimal as well, with most acts overlapping so you can at least catch the end and beginnings of adjacent sets.

With The Brightside and The Foundry open from 4pm and The Zoo from 5:30, it would be well worth your while to get down to scenic Fortitude Valley nice and early for some (very responsible) pre-Blurst whistle-wetters and to pull up a good perch for the opening acts (I am more than intrigued by the brilliantly-monikered Ciggy Pop). We’ve also pulled together an absolutely ripper playlist for you to rev up to as well as to get to know some of the acts on this stacked lineup who you might not be as familiar with as you should.

So get out your planners and work your night out as best you can. Or just show up and hope for the best. Either way, The Blurst Of Times is almost upon us and it’s going to be a big old cracker.