Ja Rule recently sat down with VladTV and weighed in on an issue that has been plaguing hip-hop since it’s entrance into the mainstream: white fans using the N-word.

DJ Vlad broaches the subject by initially asking the rapper how he deals with his own children using the word, especially in mixed company, before moving on to question Ja Rule about his opinion on white fans using the derogatory slur.

During the course of the interview, Ja Rule goes back and forth between saying that on one side of the spectrum the word is absolutely not okay to use, while also pondering its popularisation through hip-hop and, as a result, the word’s hateful roots being replaced, almost becoming a term of endearment and friendship. He states that it’s almost inevitable that white fans would be using the slur.

“I’m at a concert the other day. Nothing but white kids at the concert. Metro Boomin is deejaying and shit, right? What does he throw on? ‘All day, ni**a’… And he’s fading the ‘ni**a’ part, and those white kids are singing that ‘ni**a’ word like a motherfucker. You know what I’m saying? I’m up in the balcony dying laughing because I’m like ‘Yo, what do you expect them to do? What do you think they’re gonna do?’ To them it’s a song. They just singing a song, having fun. So, now what do you do? Not play that song when you have a white audience and you deejaying? I don’t know—I really don’t know how to combat this.”

He uses Justin Bieber as an example, talking about the time when a video of the pop star surfaced with him singing One Less Lonely Girl and inserting the N-word into it, elaborating that Justin Bieber managed to get away with it by simply apologising, as he was just a kid at the time, and didn’t know any better.

“He got a pass. He got a pass because we all looked at it like ‘He’s a kid. He doesn’t know no better. He probably doesn’t even know the history of the word.’ But he got a pass, I don’t know why he got a pass, but he got a fuckin’ pass. It’s hard to determine who can say the word, who cannot say the word… The word has a different meaning now. It’s not the same.” 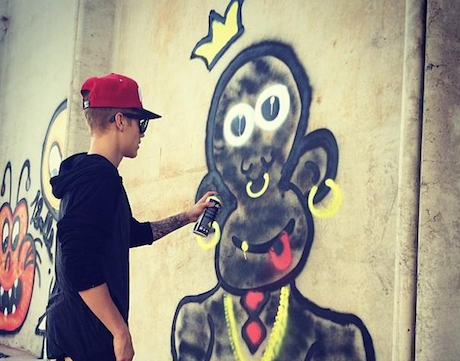 Ja Rule also talks about white fans using the word when singing along to songs, bringing up the aforementioned example about attending a concert with Metro Boomin.

“Like I said when he throws on the record and Kanye singin’ ‘All day ni**a’, and every other-every other word in that song is ni**a… and if you drop out the word, and the white kids sing it, can you blame em’? Are you mad at em’? You know what I’m sayin’? I don’t know, because at that moment, they’re not calling Kanye a ni**a, they not callin’ anybody a ni**a they just singing a song. It’s tough Vlad, you know what I mean, it’s one of those things, we gotta, the black coalition gotta get together and figure this out.”

What’s definitely true is that with the appropriation of black culture, specifically by white youth a hard line should be drawn on just how far the envelope can be pushed before it becomes offensive and insensitive.