There’s no arguing that the latest episode of Game of Thrones was one of best of the season, possibly the best, (I just can’t get over the ending!). But if you were in some way unsatisfied then they’ve gone a step further.

Heavy metal fans may have already picked it, but the episode actually featured members Bill Kelliher, Brent Hinds and Brann Dailor of Mastodon. The band members were extras as part of the Wildlings clan, so don’t be upset if you missed them, they fit in perfectly.

Brann Dailor talked of the awesome experience: (Don’t read this if you haven’t seen the episode!)

“It was such an incredible experience to be on set as extras for our collective favourite show Game of Thrones and to be wildlings murdered and then brought back to life by White Walkers was beyond amazing. I watched my best friends Brent and Bill, murdered right in front of me as I myself was stabbed in the stomach and had my throat slit multiple times, and I didn’t mind at all. It made me love being in Mastodon even more.”

As told to Pitchfork.com 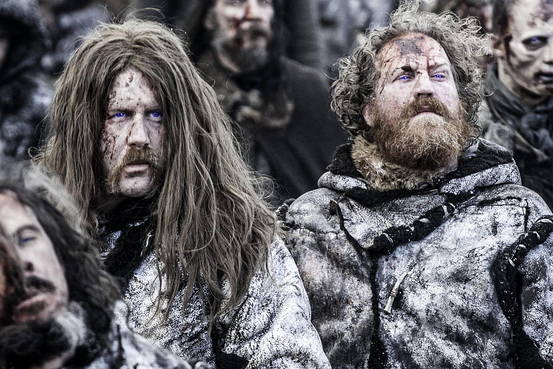 Mastodon haven’t been the first to appear in Game of Thrones. Sigur Ros played the wedding band in an episode last season, delivering a stunning, ethereal version of the ever-ominous Rains of Castmere. Will Champion, drummer from Coldplay appeared (as a drummer) in a season three episode as well as Snow Patrol frontman Gary Lightbody. If we want to look even deeper, Theon Greyjor is played by Alfie Allen, brother of none other than Lily Allen! I wonder if this will develop as the a new trend, spot the famous musician in Game of Thrones.