Neo-soul legend and one of my personal favourite artists, Lauryn Hill has shared a video of herself performing classic track Doo-Wop (That Thing) in her own home.

The video was part of an apology to her Nigerian fans, after she had to recently pull out of a concert in Lagos. She’s explained that the tour promoter didn’t organise travel arrangements, and thus the show had to be cancelled.

After talking about how she was stuck at an airport for seven hours trying to make it to Nigeria, she launched into a gorgeous rendition of her Grammy-winning track, accompanied by an equally gorgeous group of family members/backup singers.

A message to Nigeria from Ms. Lauryn Hill

She also posted to video to her website, alongside a photograph of her team at the airport. 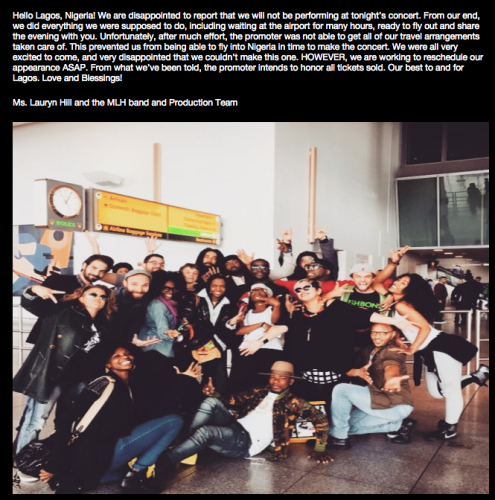 Lauryn Hill has not released an album since 1998, and in the years since, has developed a questionable reputation when it comes to her live performances.