Earlier this year, Sydney hip-hop duo Horrorshow released their fourth album, Bardo State. The pair have always been at the cutting edge of Australian hip-hop, with Adit (Adit Gauchan)’s production and Solo (Nick Bryant-Smith)’s lyricism and themes pushing boundaries further than many of their contemporaries. It’s never been truer than on their latest outing, which saw them interpreting new sounds and styles in their own distinctive way.

It’s no coincidence that Horrorshow have released their most realised and engaging album at a time when the spotlight has never been brighter on hip-hop from our own backyard. As though rising to the challenge of appeasing the growing mainstream attention local hip-hop is receiving, Solo’s lyrics have never been more dextrous, while Adit has proven himself to be one of the most creative, talented and experimental producers in the country, if not beyond.

Bardo State is triumphant in its diversity; from the wistful, melodic Astray and the powerful Ceiling Fan ft. Omar Musa (reportedly penned after the Brexit vote and recorded after Trump’s election victory) to the hazy, feel-good Our Time and piano-driven bedroom banger Never Say Never, there’s a lot going on – but it’s packaged to be digestible, colourful and engaging every point along the way.

Along with Spit Syndicate, Jackie Onassis and Joyride, Horrorshow are part of hip-hop collective One Day, responsible for a killer 2014 posse album Mainline, as well as their regular monthly One Day Sundays parties, which has recently started expanding out of Sydney into Brisbane, as well as a full national Block Party tour last December.

Next month, Horrorshow will be heading over to Minnesota for Rhymesayers Entertainment’s renowned Soundset festival, marking the first time an Australian hip-hop act has ever performed in the festival’s ten year history. They’ll be playing alongside big names including Lauryn Hill, Travis Scott, Pusha T and Talib Kweli, as well as Rhymesayers artists and affiliates like Sa-Roc, Brother Ali, P.O.S, Dr Octagon and of course, Atmosphere. Returning home, Horrorshow will then be embarking on a massive national tour throughout June and July, kicking off on June 2 at Margaret River and ending in Alice Springs on July 22.

With the dust settled following the album’s release, we sat down for a chat with Solo about Horrorshow’s music progression, the album’s collaborators and more. 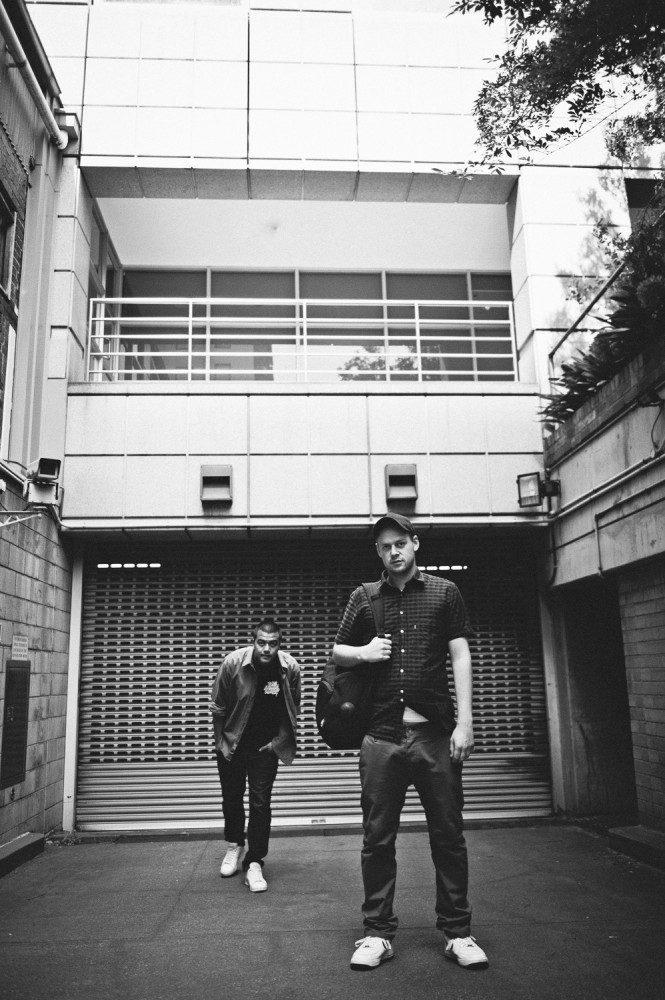 Thanks for chatting to us today. I’m absolutely loving the new album, how are you feeling about the response so far?

Thanks very much! We’re feeling good about the reception to the album. It was crazy seeing the reaction online, and we had a lot of our friends hitting us up, telling us how much they love it, which is awesome because a lot of them have been listening to us for a long time, nearly 10 years now. They don’t always come to shows anymore – which I understand because they’ve been to hundreds of them, but it’s nice that so many of them took the time to listen to the album and tell us how much it means to them. Our fanbase too, the overwhelming majority have been really, really, really positive about the record, so it’s been great to see.

The first thing I noticed was a definite progression in sound, and a really different range of styles, but there’s still a very “Horrorshow” stamp to everything. Is it something that you’re really conscious of, not to completely alienate your fan base?

We don’t necessarily think about it too much in terms of our audience while we’re making the record. We’re not sitting there going. “Oh, are people gonna like this ’cause it’s different to what we’ve done before? Are they not gonna like it?’ It’s enough of a head-fuck as it is making a record, just trying to make yourself happy, let alone trying to imagine what tens of thousands of people out there want to hear. So we never really think about it too much in terms of the audience.

I really just try and compose stuff that I’m personally happy with and proud of, and use that as the barometer. If we make something that I feel good about, I’m usually pretty confident that our audience will pick up on that and respond positively to it.

There’s been a small handful of people online who are not happy, because the record is different to what they thought it was gonna be. But I get where they’re coming from. When you have a band you really love, you have a real attachment and a lot of memories that you associate with their music, you tend to want it to sound a particular way or to remind you of how those previous records sounded, but that’s just not really the point of making a new album.

Yeah, why make the same stuff over and over?

Exactly. You spend years of your life working on this thing, why would you just do what you’ve already done? So it’s good to hear you feel the progression, but that it’s still ultimately our sound. That’s how I feel about it. I feel like that’s really your job every time you go to make a new record: to stay true to what you are, but to do it in different ways and to experiment and introduce new flavours. We’ve definitely done that on this record.

Adit’s production style has changed a lot in the last few years too. It’s a result of collaborating with all the One Day guys on Mainline, working with other producers, a result of One Day Sundays, and all the time that we’ve been spending around dance floors and the music that’s coming out now.

It’s rubbed off on me too, I’ve been listening to new music like Anderson Paak and Kendrick Lamar – people who’ve come along and changed the rap game. It’s our job to stay inspired, so when we’re hearing artists doing amazing contemporary stuff, why not try and channel it in our own work? So long as we’re doing it in our own way. We’re okay with a couple of people not liking it!

There are some fabulous features on the album, like Turquoise Prince LTC who I’m a huge fan of, he’s so talented, and Omar Musa, Taj Ralph. Can you tell us a little bit about how you chose the collaborators?

Coming from the One Day record, which had been more collaborative, we knew we wanted to open up the songwriting and production process a bit. For us to still be at the helm, controlling it all, but to collaborate and to bring in the ideas and perspectives of people whose talent we really respect. I first heard Turquoise Prince LTC on Hau’s record, on Skip Hop, and I was like damn, this kid’s really something else. So we just went along to a show he was performing at and linked up with him, we got on really well.

He’s super passionate about music, an incredible talent. Adit and him really hit it off, and they have a really dope chemistry in the studio. They’re actually working on some music for Turquoise Prince’s stuff which will be really cool.

Omar’s a great energy and a really inspiring dude to be around and to bounce ideas off. Actually, the song he’s on – Ceiling Fan – just came out of a conversation that he and I were having. It was in the days after the Brexit vote, we were just talking about the fucked up state of the world and the way that people were trying to divide each other, and we channelled all that into a song.

So with those guys, they’re close friends. With somebody like Taj Ralph who’s on Push, that one came about a lot more by chance. I was literally walking along in the street in Manly and I saw Taj busking. I stopped and watched him for a few songs, and I was like, this kid’s really something – he’s only 16, but at the time I saw him he was only 14. I wrote down his name and looked him up later on, and when I wrote that chorus I had in mind that his voice would really take it to the next level, so I reached out to him.

We’ve got Hayley Mary on there too, I’m really proud of that song [After Dark]. It means a lot to me. I was super stoked to have Hayley on there because I’ve known her for years. We first met doing a photo shoot for Come Together Festival in Sydney and hit it off. She was talking about how much she loves Eminem’s lyrics but finds certain things in hip-hop a bit problematic, and we started chatting about that. We stayed in touch and we’d hit each other up on Twitter every now and then, but obviously The Jezebels are a massive band and they’ve been going all around the world. I reached out to Hayley a couple times in our career to see if we can do something together, but it’s never been able to happen until now. I was super glad that it came together for this one, she came through to the studio in Sydney and we wrote some stuff.

With our collaborations, that’s kind of always how they happen, pretty organically. We’ll get an idea for something and we’ll reach out to the person, and then we’ll usually make sure that it’s all a vibe kind of on a personal level, you know?

Yeah, I think you can sense that in the music.

It’s important when you’re making a song, to have good personal chemistry and to be able to trust the person that you’re in the studio with and feel like they’ve got your back and vice versa. There’s a few other features I haven’t mentioned, we’ve got Kai from Jackie Onassis, obviously a really close friend of ours, we’d wanted to get him on a song for years. We had some collaboration on the production side of things as well, like our guitar player Johnny Graham, he’s played in our band for years, he co-produced a bunch of the songs. Freddy Crabs from Sticky Fingers, also a very good friend of ours, and we worked with a producer out of Melbourne by the name of Nick Martin. He executive produced the record with Adit, and just took things to the next level. It’s just about surrounding yourself with good people and for that energy to find its way into the music.

With this album, there’s more of a mix of those different flavours than ever before. I think all these flavours have been present in our music for a long time, but maybe previous albums have tended toward more light or more shade.

I’d definitely agree with that.

Whereas this album feels like it’s got more moments of both, light and dark.

Absolutely. The changes are really nice, like noticing a more dancey song or amore serious one after each other.

I think it’s a bit more balanced in that way. Going back to what we were talking about before, one of the comments I’ve seen from someone who’s not happy about the album, they said that the beats sounded too happy. It’s like, do they just want me to be miserable and make songs about how I’m depressed?

That’s funny. It definitely shows the state that you’re in in your life and it obviously is a lot happier now, and that’s awesome.