In an ever-changing industry like music, artists and bands have found it increasingly difficult to make the same dough from sales they might have even just a decade ago. That’s where things like brand partnerships, exclusive deals, ad syncs and sponsorships come in.

But these deals can go one of two ways – mutually beneficial and lucrative if the positioning is right, and potentially alienating if it’s not. If the brand or company in question has engaged in shady practices and/or is generally regarded as being at odds with the artists’ perceived message(s), the artist opens themselves up for criticism by association.

Oftentimes, these deals are not made by the artists themselves, so let’s nip that one in the bud. These are deals made with record labels, distributors, publishers, management, booking agencies – that’s not to absolve the artist who inks a deal with a dodgy brand of accountability entirely, but it’s important to note it’s usually not their own direct action.

Recently, veteran Austin indie rock outfit Spoon announced in a Facebook post that a limited hot pink vinyl pressing of their impending ninth album Hot Thoughts would be available for purchase exclusively via…. Urban Outfitters. Putting aside the pretty transparent youth-market grab – Spoon formed in 1993 – that’s…. not a great look. Not to put the spotlight squarely on Spoon – many artists have signed exclusive deals with Urban Outfitters; most recently Spanish brat-pop act Hinds created a damn collection for them and of course plenty other bands distribute music through UO, from Kendrick to Run The Jewels to Young Thug and more.

As appealing as the brand may be to a certain section of music lovers, Urban Outfitters have categorically proven themselves over and over again to be unconcerned with ethics. Their founder, Richard Hayne, has donated over $14 million to noted Horrible Pondscum Human Rick Santorum. These are the people that manufactured and sold a t-shirt emblazoned with “EAT LESS”, a horrifically racist, classist board game called “Ghettopoly” (featuring charming chance cards like “You got yo whole neighborhood addicted to crack. Collect $50“) and a concentration camp-style shirt. They have repeatedly stolen designs from independent artists. They were sued in 2012 by the Navajo Nation for trademark infringement. You get the idea. They’re not good, and Spoon’s more progressive fans aren’t loving the announcement made on their Facebook. 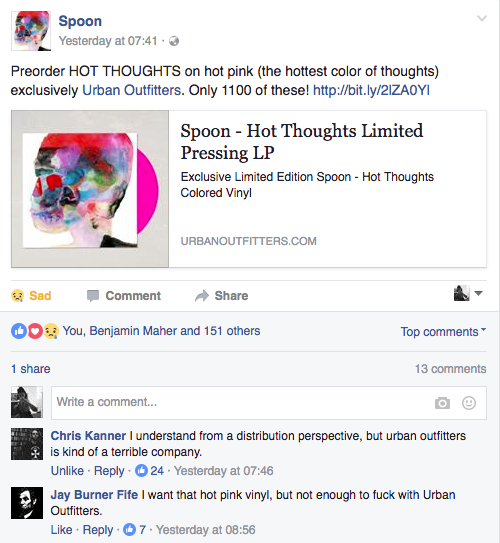 It’s not secret that Pepsi loves its musician spokespeople. Madonna, The Black Eyed Peas, Ozzy Osborne, Faith Hill, Michael Jackson, Beyonce, One Direction and more have all endorsed the drink formerly known as “Brad’s Drink” (seriously). It should be noted that PepsiCo has been named a World’s Most Ethical Company several times, however until changing their ways in 2014 their ownership of international land had caused much environmental and social strife, and they tested on animals until 2007 (well after many of the aforementioned artists had inked their deals).

Of course, any backlash these artists faced for pairing with this particular brand probably didn’t have much of an affect on their sales or size of their fanbase, but that doesn’t make those actions beyond criticism.  Perhaps what criticism Spoon do face for this will be so minor that they simply don’t care, but that’s exactly why it’s important to be critical of these practices in the first place: to expose complacency and encourage more ethical practices. Urban Outfitter’s controversies are well-documented and yet they continue to turn a massive profit: that doesn’t mean we shouldn’t bother being critical at all.

And it’s not as though there are never any significant consequences for the artist, either. When an artist is perceived to be pushing a certain message to their audience and then they profit from deals made with brands directly at odds to that message, things can get ugly. Who could forget Xavier Rudd-gate in late 2015? The artist, activist and outspoken vegetarian signed a sync deal with notoriously not-vegetarian restaurant KFC, who played Rudd’s popular track Let Me Be over ads for their Home Cricket Ground range, inciting rage from his previously devoted fans.

Following a constant barrage of outrage and disappointment across his Facebook and Instagram, eventually one particularly upset fan “updated” Rudd’s Wikipedia page to call out his hypocrisy. 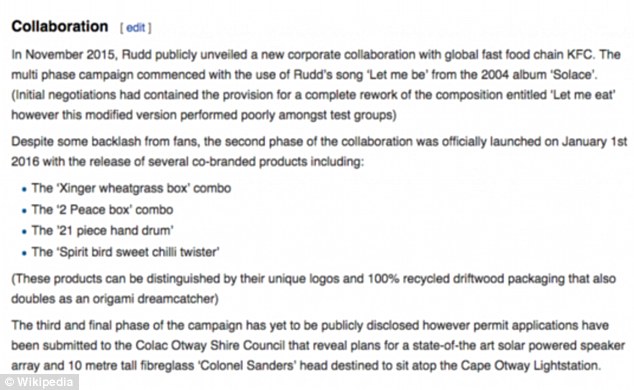 Rudd recently embarked on a run of regional shows and is about to release a Live In The Netherlands album, so it’s not like his career ended following this obscene blunder, but his reputation is irreparably scarred in the eyes of his staunch-vego Australian fanbase.

At the end of the day, artists and bands are businesses that must generate revenue in order to survive, so it’s easy to see why brand partnerships, sponsorships, and exclusive deals are so attractive. Syncing music to advertisements is no longer viewed as “selling out”, it’s accepted and encouraged as a potentially huge revenue stream – but the positioning has to be right.

As Tyler McLoughlin, founder of The Sound Pound, told triple j’s Hack, “Just a really rough idea, in terms of independent artists, a 12 month advertising campaign across maybe TV, radio, cinema, online, could be anywhere from $15k to $70k. It’s not just a cash grab, you’ve got to be able to make sure it’s actually going to work for you as an artist.”

Despite its potential benefits, it’s important to acknowledge the ethical dilemmas that arise when musicians partner with brands that are questionable – and it’s equally as important to note that enjoying someone’s music while being critical of their operations as a business aren’t mutually exclusive.