Though To Pimp A Butterfly was released two years ago this month, Kendrick Lamar‘s presence has been constant ever since – in spite of, remarkably, next to zero social media.

Kendrick has always been generous with his features, so he’s rarely absent for long. Whether collaborating with Maroon 5 and Taylor Swift or A Tribe Called Quest and Dr Dre, he’s got the Midas touch on even the lamer (Maroon 5) and more lighthearted moments. (“Sexy nasty, have no guideline, one day, four times,” anyone?)

But yesterday was different. In a now-deleted Instagram post he shared a simple message, “IV”. Most assumed he meant a new album. 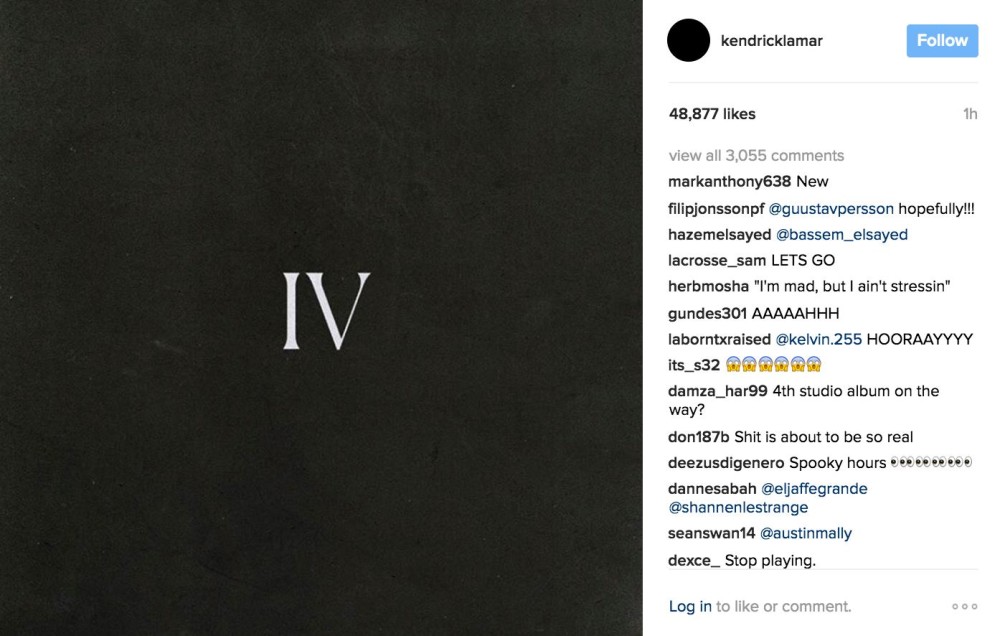 The image had two meanings. Album number four is coming, but first, a new track: The Heart Part 4.

A brief history of the series: Part 1 came out as a standalone back in 2010. Part 2 was released that same year on his mixtape Overly Dedicated (if you’ve never listened to OD, do yourself a favour. His formative years were amazing.) The third instalment, The Heart Part 3, (Will You Let It Die?) came out just days before 2012’s groundbreaking Good Kid m.A.A.d City, but did not appear on the album.

He could’ve released anything yesterday, but he chose to drop the fourth part of a series last visited five years ago.

The 2010 track was produced by Yasiin Bey (Mos Def) and David Kennedy. Atop jazzy keys and shuffling percussion, his flow is continual, free, train of thought. It starts calmly but he grows more frazzled and frantic throughout.

He honours the dead, but isn’t ready to join them; In graphic detail he describes Compton and his need to save it (“I remain the good kid, tryna make a difference where I’m from, where you live.”) He has a responsibility in bringing hip-hop to those in need, from struggling youth to black men in prison.

He recognises his own talent (“Words crash cars when I write these sentences”), proven through brilliant wordplay (“I always think I’m kicking something with feeling, I should’ve been a dentist.” Feeling sounds like filling, get it?), and the talent of others (“Said I’ll see [J Cole] on the bubble in the future, my dude I salute ya,”).

This was the opening track on Overly Dedicated, also from 2010. One of the best known tracks outside of his three albums, Kendrick himself has said it’s among the best he’s ever written. It was produced by The Roots and begins with Dash Snow talking about how music keeps him alive. It’s also set in a free flowing, stream of consciousness style with a warm, jazzy instrumental.

The themes from Part 1 are back. He wants his music to have meaning (If he dies, “fuck a funeral, just make sure you pay my music respect”), he’s conflicted about religion (“I’m just caught in the loop, of understanding the truth, because it seem like it’s always clashing with science”), he knows he needs to help Compton.

Again, he preempts his own game-changing fame. “They said seven tracks, I said fifteen, called it an EP, they said I’m trippin’, but little did they know, I’m tryna’ change the rules.”

Part 3 was recorded three days before GKMC dropped, and released a day later. It follows the same stream of consciousness format and features his TDE comrades Ab-Soul and Jay Rock. Atop a lush, flute-laden soul instrumental, it’s a lot darker than the first two and reflects his career progression to that point.

The pressure has arrived (“When the world sees you as Pac reincarnated, there’s enough pressure to live your whole life sedated”). It’s almost too much (“Find the tallest building in Vegas and jump off it”), but he’s got work to do first (“Thinking, ‘How can I make an example for this generation of Compton?”‘). Like Dash Snow in Part 2, music keeps him alive (“Make the decision, ride the beat or ride a hearse”).

So, what’s it all about?

Kendrick uses The Heart series to stop, turn to his fans, and reflect. He discusses what he’s doing and why he’s doing it, his purpose, and what to expect in his future. He offers an uninterrupted view of his fears, worries, dreams and ambitions.

Each part acted as a marker during significant moments. They each followed his rise to fame, anchored to the music, having also provided album information and specific release dates.

To say a lot has happened since The Heart Part 3 is the understatement of the century. One way or another, the series was largely forgotten. Until this week.

Five years, two albums and a meteoric rise from promising upstart to GOAT contender later, we got another one.

The Heart Parts 1 – 3 were contemplative snapshots of Kendrick trekking to the top. On Part 4, he’s arrived, he’s set down his flag. One small step for K Dot, one giant leap for rap kind.

Having graduated from Part 1′s “lil Compton n***a” to “hip-hop rhyme saviour”, he’s got little left to prove; he’s King Kendrick now. He gathers his accomplishments, looks out across his kingdom, declares his intent.

The track opens gently, with soft, almost psychedelic keys. He recounts his success – he’s at the top and he’s got $30 million to prove it. His future is secure (“This seed in this soil is classified, I’m satisfied when I strategise my kid’s future”) and though considered a god, he “ain’t sanctified enough to say I won’t shoot ya.”

At 1:20 it abruptly changes. The instrumental grows angry, the beat is heavy and aggressive. This is something new, something unprecedented for The Heart. He may be the king, but he still has darkness, anger and enemies – power doesn’t equal purity, after all.

This is an angry Kendrick we haven’t seen in years (probably not since Control). He takes aim at a few contemporaries, mainly Drake, presumably, in a subliminal lyric about their subliminal beef (“Tiptoein’ around my name, n***a, you lame”). Many are speculating that Drake’s album More Life played a big role in prompting Part 4 – sure More Life is good, but is it great, or just better than Views? Maybe Kendrick saw the world going gaga for it, and realised he needed to remind everyone exactly why he is, and always will be, a superior rapper.

“One two three four five, I am the greatest rapper alive,” he confirms. After a bit more bragging (which admittedly feels funny coming from a post-TPAB Kendrick, but not in a bad way), he turns to politics (“Donald Trump is a chump”, “Russia need a replay button, y’all up to somethin'”), and the stress that comes with fame (“salmon and capers, fame and lawsuits”).

Speaking on album four he says, “drop one classic, came right back, another classic, right back,
my next album, the whole industry on the ice pack.” Finally, he ends on “Y’all got ’til April the 7th to get y’all shit together,” hinting at the release date for his new album.

The Heart Part 4 will not be on his next album. Like a “Previously on…” season recap before a new TV episode starts, it’s a rundown of everything that’s happened so far, while setting up the tone, themes and plot points for the next season. We now know where Kendrick is at with his life right now, what he’s thinking, what’s on his mind, what makes him happy, what makes him angry. So now it’s time to get on with the music.