It’s been over three years since Lorde released Pure Heroine, her precocious, grazed-knee debut LP. She was just sixteen years old when she became a household name, and now, having recently emerged from the teenage-hood that was so intrinsic to her sound and appeal, she’s apparently about to make her grand return. Lorde now has an incredibly broad, high platform from which to speak and create – no mean feat for a young Kiwi artist – and she’s consistently used it to break down stereotypes and encourage young women to be unapologetically themselves. Sure, every pop idol tends to preach some brand of empowerment these days, but Lorde’s unapologetically dark, raw approach is a far cry from say, Taylor Swift‘s ultra-shiny, pre-packaged brand (yes, they’re friends. We’ll get to that later).

Once called “the future of music” by David Bowie (an accolade most artists would have killed for), Lorde made her debut as a jaded, devil-may-care teen, with sparse production providing a canvas for her to spill her guts onto, painfully self-aware and critical of absolutely everything: We’re hollow like the bottles that we drink. It’s not uncommon for young women in pop to sing about partying and drinking; what set Lorde apart from her peers was her fascination with the uglier side of these things. Despite this, along with her refusal to transform into a sexual object, Lorde excelled. Five singles in the Billboard Hot 100 Chart. An album that debuted at #1 on the ARIA chart and reached #3 on Billboard. Top ten charting in eight additional countries. A Grammy. She became a mainstream pop artist, and she didn’t look or act like anyone else around her in that same sphere.

Not to say Lorde is a bastion of representation. She’s a white girl from a middle-class Auckland suburb – hardly a revolutionary inclusion in the mainstream, all things considered. But for many young women, repeatedly judged and bullied for not voraciously adhering to trends – the kind of women who grew up with Daria as their hero – Lorde was a breath of fresh air. A living, breathing, singing Daria.

After a whirlwind of festival slots, headline tours, and smash singles, she went largely quiet. There was her (fairly underwhelming) contribution to the Hunger Games soundtrack, and her (much better) collaboration with Disclosure, but that was about it. Until her name began appearing on festival bills again, that is, indicating new music on the way. Not just any festivals either, but the biggest in the world: Coachella. The Governor’s Ball. New Orleans Jazz & Heritage Festival. Free Press Summer Fest (FPSF). Fuji Rock (and let’s be real, the chances are pretty good she’ll be announced for Splendour too). Oh, and her label Republic Records publicly listed a release under her name on the agenda of a recent meeting. With the date “3/7″ – March 7th for anyone who writes dates the correct way – listed next to it, looking mighty like a release date, that means we have just over a week before we hear new music from Lorde. 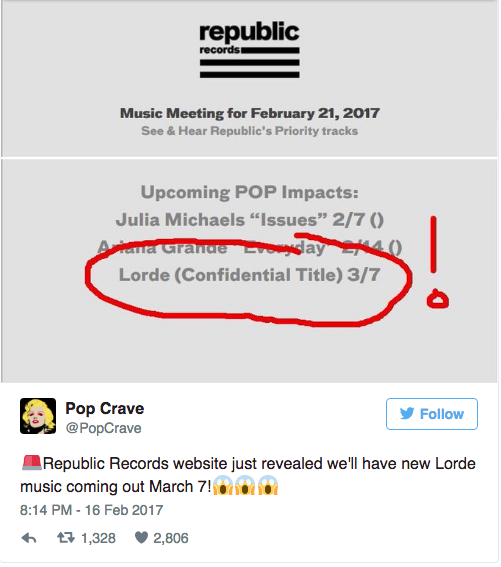 But what is it? A single? An album? A single and a video? It’s listed alongside Ariana Grande’s Everyday and Julia Michael’s debut single Issues, both of which were officially released in January, so safe to say we are incredibly close to hearing new music from the goth-pop ingenue.

In the past few years, which not releasing music, Lorde has been busily propping up and validating a culture where girls can be “not like the other girls” but also actively love and support other girls. She’s been relentlessly unafraid to broadcast her humanness – see Exhibit A below, where Lorde uses Instagram (a platform notorious for its heavily-filtered endless stream of unattainable perfection) to broadcast her teen skin woes.

in bed in paris with my acne cream on

She was critical of the overt sexuality she saw being sold as an intrinsic part of any young woman in music’s career, and spoke out against it repeatedly. When Selena Gomez hit back at Lorde for “not supporting other women” after the latter criticised the way the former’s single Come And Get It portrayed women, Lorde refused to back down. Insisting that she wasn’t about to abandon her “strong morals and opinions” just because she was being called a “hater”, it was refreshing to see such a young woman be so steadfast in her conviction when criticising something that was, admittedly, pretty problematic:

But let’s be clear. Lorde’s criticism was “I’m sick of women being portrayed this way” not “Selena Gomez is Bad For Being Sexual”. To suggest that it’s anti-feminist to critique a piece of art just because a woman made it is reductive and, quite frankly, ridiculous. Perhaps realising this, the pair buried the hatchet the following year, and became fast friends. Which brings us right back to another one of Lorde’s high-profile friends: Taylor Swift.

Right off the bat, Lorde pinpointed the issue with figures like Swift – that they peddled something “flawless and unattainable”. The two later ended up as friends, with Swift even organising Lorde’s 20th birthday party, and it’s tempting to read this change as an abandoning of former ideals on Lorde’s part. But this is exactly what makes Lorde so important to her audience of (primarily) young women. She has spent a significant portion of her press time critiquing structures and cultural norms, but refuses to lay blame at the feet of another woman. She will make her thoughts known, and embrace and love her fellow women unequivocally. This is the lesson that mainstream pop needed to learn, though it can’t be said that it’s been entirely learnt yet. That’s what this impending release carries on its shoulders – scores of young women who never had their strong opinions and pimply skin validated in the mainstream before are waiting for Lorde’s next move. And so are we.