Do you have a lot of stuff left over from when you were a kid? Stuffed toys, VHS/DVDs, an old blanket, a photo frame or two. Things that you know you should get rid of because you really don’t have a use for them any more, but for some reason they remain, gathering dust and causing a twinge of guilt whenever you look at them? Maybe these things used to be important to you, or maybe they’re just meaningless knick knacks and you’re lazy/nostalgic/forgetful, so you’ve kept them. Even though they’re old, weird, annoying or outwardly racist. Ah, shit – the metaphor fell apart. I’m talking about Angry Anderson, of former-ish Rose Tattoo fame.

In today’s constantly-connected world, we’ve collectively become pretty damn good at finding out dodgy behaviour and latent bigotry and exposing it. But even though the information pertaining to Angry Anderson’s reprehensible and completely nuance-free opinions is readily available to anyone with so much as a passing interest, we’re still allowing him to be A Thing.

A Thing that joined Guns N Roses for three shows in Australia this month. A Thing that’s still booked across respected festivals and venues nationwide. A Thing that can send out a press release that claims, in a spectacular display of either tone deafness or hideous mockery, that Anderson is “celebrating Australia Day” by releasing a live album, and have this information regurgitated by outlets without a hint of irony or criticism. 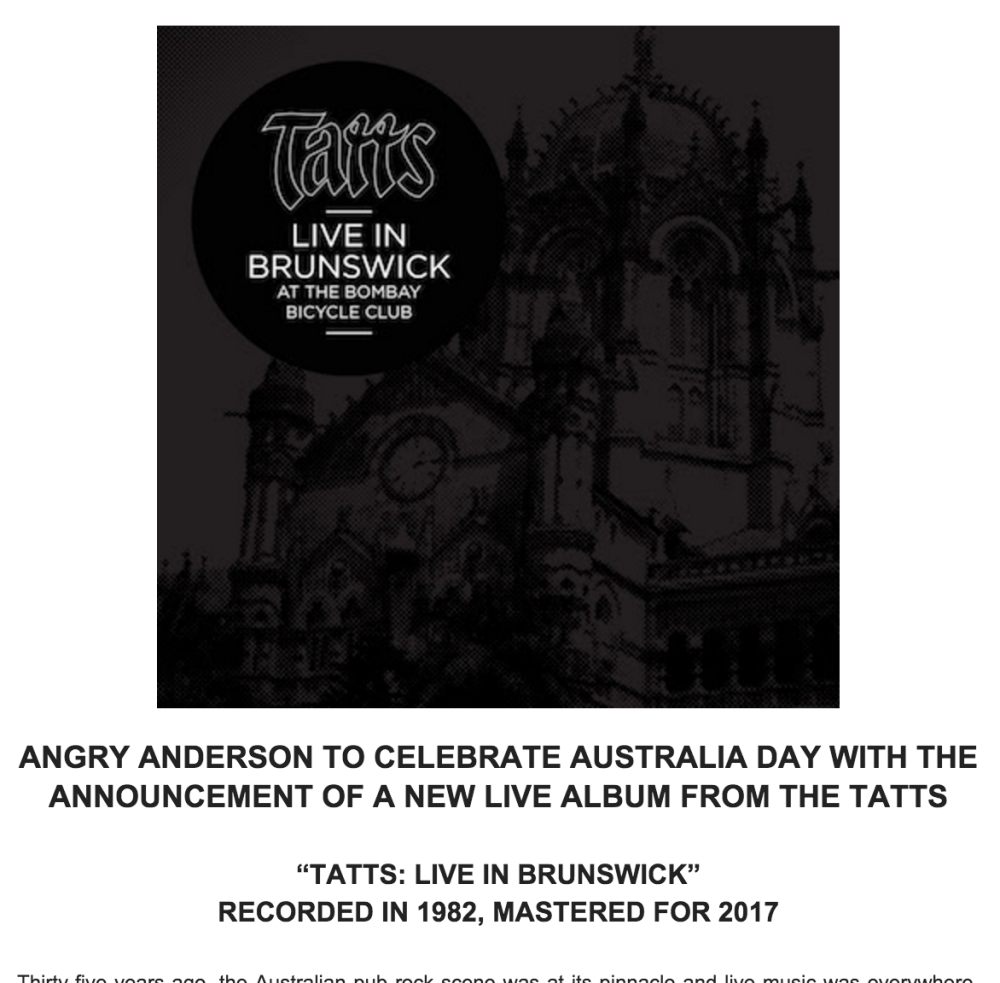 Anderson insists that he is not racist. “I’m not racist” is the rallying cry of the person who, because they refuse to look deep within themselves and the lessons that have implicitly and explicitly been taught to them by the way society operates, ends up saying and doing racist things.

If only these people would put the same amount of energy into engaging intersectional thinking when examining society’s problems as they do into insisting that they aren’t racist. If someone asks Anderson if he hates people with skin darker than his, I’ll bet any amount that he’d say “No, of course not”. But if you ask him if he thinks people with darker skin than his are responsible of the bulk of youth violence in Australia, he will say things like this:

“Aussies use their fists [when they fight]… weapons were introduced by other cultures”,

“The racial thing, the cultural thing needs to be addressed because it’s not going to go away”,

These remarks were made by Anderson to a Federal Parliamentary Committee in 2010. Anti-Discrimination Board president Stepan Kerkyasharian promptly asserted that Anderson’s views on these matters are literally just some old guy saying words that don’t make any kind of sense or having any ring of truth to them. (The exact quote was that his line of thinking was “pure fantasy”.) Anyone who knows what kind of weapons the First Fleet brought with them will understand that instantly.

It’s harmful enough for some average Joe to spew hateful false rhetoric. It’s infinitely more dangerous when the person saying these things holds an esteemed position in society, whether from previous contributions to the arts or by being an actual political candidate. Anderson is all three of those things. Previously linked to the Nationals, last year he hitched his crotchety old wagon to the far-right anti-Islam Australian Liberty Alliance.

Despite having had a unique opportunity to gain insight into the plight of Muslim refugees during his stint on SBS’s Go Back To Where You Came From in 2013, Anderson continued to stick his neck out in support of a ban on refugees from Islamic countries. In an interview with The Guardian, there seemed to be a glimmer of hope for his sense of justice: “I went to Kabul … And I found a group of people who we traced from Melbourne, the Hazara people. And they came here, and to their horror, they were subjected to the same pressures and the same discrimination that they ran away from.”

But then again, maybe not. When it was pointed out that the ban Anderson supports would prevent the Hazara people from seeking asylum in Australia, he simply said: “The complexity of the policy as it stands, I’m not across that.”

So not only does he hold extraordinarily dangerous views and have a constant platform from which to speak them, he also doesn’t actually know what he’s even talking about. Good to know.

It says a lot about our current climate that we haven’t already collectively just decided that Angry Anderson – who last year announced he was going to run for senate for the ALA and previously warned Australia of becoming “over-balanced” – but the time has come and we are calling it. Angry Anderson is cancelled. Angry Anderson will no longer be A Thing. Not in music, not in society, politics, Australia, anywhere. It’s time to ignore his own and any “new Rose Tattoo” music (which is arguable anyway, as he’s the only remaining original member), stop booking them on festivals and at venues, and DEFINITELY stop letting him piggyback huge international tours as he desperately clings on to his last, fraying shred of relevancy.

If he must be written about, his shortcomings and violently outdated opinions must be the lens through which he’s examined. The already-dubious “separate the artist from the art” argument doesn’t hold much clout when the artist is also a politician.