When David Bowie died, the world lost an irreplaceable talent.

In a fifty year career he blazed a trail that brought joy to millions, changing lives and opening minds. Many of us would not be the people we are, were it not for Bowie.

That passage echoes a sentiment felt by the entire music world on January 10 last year, and is the driving force behind David Bowie’s team in New York and London, and the Brixton community, who have officially launched their crowdfunding page to erect a 9 metre tall lightning flash from Bowie’s Aladdin Sane LP cover. The iconic lightening flash will be presented in “gravity-defying red and blue-sprayed stainless steel.”

Aptly located, the Brian Duffy image will be situated beside the renowned Aladdin Sane mural painted by Australian artist Jimmy C in 2013. The piece quickly became a local shrine following Bowie’s untimely death. More importantly it will be situated five streets away from Bowie’s Stansfield Road birthplace and will be smack-bang-opposite Brixton tube, the first thing people see as they arrive in Brixton.

A number of different rewards are available to those who donate to the lightning bolt memorial fund, including limited edition prints, gold pendants, t-shirts, and even the opportunity to have your name included on the memorial’s corresponding website. Below you can check out renderings of the memorial as well as a video about the project.

So what are you waiting for, donate here. 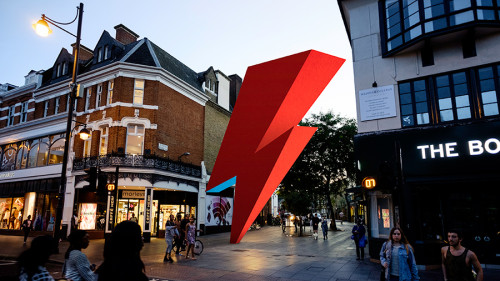