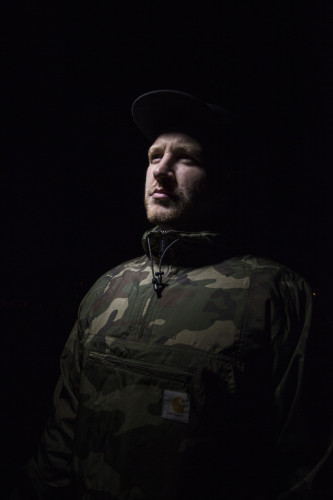 Given Name: Not given

Years in the game: 5 years seriously but many years before that.

Melbourne MC Sinks has been a staple in the local scene for some time now. Over the past five years, he has risen up through the ranks with his hard hitting political rhymes and details of rappers who seek fame over their craft. As a producer and beat maker himself, Sinks prefers to rap over sample laid beats, which when matched with his flow gives you that old-school vibe but with that classic Aussie flair. His debut album BACKLASH was released in 2013 and had plenty of guest spots from other local champions including Fatty Phew, Phil Gektor, Sparts, Dazed, Force, Mol One, Ramzee, WIK, Dazed, Phil Gektor among others.

Over the past three years, Sinks has delved deeper into his own psyche working with just one producer, SP1200 wizard Oath, to bring out a more intimate concept. The result is the incredibly fresh and conscious album Cold Fury, which is out now.

The album is being launched this Friday, January 13 at Melbourne’s Workers Club with Dj Biko, Mol One and Mr Shift on drums and guests Dyl Thomas (of Milwaukee Banks), Joe Snow, Woz and Midnight T.

What got you interested in rap and hip-hop culture? The depth of lyricism, the head nodding beats, its ability to harness some of the greatest soul funk and jazz to make something original, the anger and the political nature.

Cold Fury is your first album in three years, so what else have you been up to in that time?

I haven’t stopped making music. I was working hard perfecting this album, but I also managed to accumulate quite a lot of miscellaneous material at the same time. I made an instrumental album – just digitally, nothing major.

You can feel the hunger for the rhymes and your art really come through on Cold Fury. How long did you actually spend writing this album?

It’s really hard to say because I was constantly chipping away at it. What I can say is that there was not one line that wasn’t painstakingly put down. I was really critical as to what I would let stay on the record. In saying that, the recording process had finished close to a year before the actual release.

I read a little while back you had two albums ready to pop. Cold Fury is out now, so will we see the other one this year? Were there more tracks that weren’t quite ready?

You will definitely see at least one album’s worth of material from me this year. Just not sure whether it will be all in one hit, or broken up into a couple of EPs. I’ll need to figure out how I’m going to unleash it. One thing I can say is that I plan to do a lot more clips and release things on a more track-by-track basis. I’ll be releasing as many tracks and clips as possible without compromising on quality.

The official album launch is Friday. What are you expecting for the night? Have you worked with Dyl Thomas or Joe Snow before?

I’m expecting a solid night of good music and respect. I have done tracks with both; they are top quality MCs and good quality humans.

Your last album BACKLASH was pretty heavy on the features, but you’ve dropped that right back on Cold Fury – was that a conscious decision?

Very much so. Every track had really distinct content and direction and as a result, I thought that adding guest verses would be arbitrary and not really serve to develop the concepts.

What was it like working with Oath? How was the process of having one MC and one producer? Was that something new?

It was great. I really think we had a solid chemistry. He was really was able to capture the essence of what I was looking for in beats. I knew before I started the record I wanted to make an album with one producer for the sake of cohesion. It was my first time doing that and I think the next time I put an album on wax it will probably be with one producer as well.

I understand that Oath produced a lot with the SP1200. For hip-hop fans who might not know the equipment side, can you give me a little run down of using that machine, and its sound?

It’s got a rich history in hip-hop and has been used to create some of the best albums in its history. Pete Rock, Buckwild and Lord Finesse have been champions of the machine. Its charm is in its filtering and its 12bit sampling rate. Despite it being primitive by today’s standards, it simply processes sounds in a way modern stuff can’t emulate. The limitations of it are also its strengths.

He’s given you a good spread of styles to rhyme over, you’ve got some jazzy tunes and some hard hitters. Too many MCs just keep recycling same styles and same flows – how do you keep it fresh each time?

I guess I just pick my beats by mood. It’s funny you should say that because to me they are all very similar and that’s what I wanted. But I’m glad other ears hear it differently because if it all sounded the same that might not be so appealing.

You often bring up the theme of MCs being in hip-hop for the wrong reasons. It’s a pretty happening time for the local scene, it’s emanating strength, so do you still see a lot of MCs taking the wrong approach out there?

I think what I was trying to get at with that sort of commentary is not so much the skill but the desire to be famous. Celebrity ambition is what makes MCs sound horrible more than any other quality. Fame has precisely zero to do with music but artists have internalised a morbid kind of narcissistic self-interested attitude that has been propagated by the fact that there is a corporate dominion over music. Worse still, people can’t differentiate between quality of music and corporate success; the latter have nothing to do with the former. But to answer your question, yes.

We are sure to see lots more from Sinks this year. You can purchase Cold Fury on Sinks’ Bandcamp. If you’re in Melbourne Friday night, head down to The Workers Club for the Cold Fury album launch. Tickets from Oztix.