American singer, songwriter and actress Keke Palmer isn’t one to stay quiet when something doesn’t sit well with her. Case in point is her lambasting of  Trey Songz after discovering he filmed her without her permission to use her likeness in his latest music video.

Palmer has been in the spotlight for a long time (she first came to attention in the early 2000s) and has been vocal about representation, sexuality, equality and self-empowerment (her song I Don’t Belong to You and it’s corresponding video in particular, capture that). Over the weekend, she looked to be starring in a new music video, though it was soon revealed that she had no idea she was even being recorded at the time.

In a series of tweets, followed by Instagram videos, the 23-year-old spoke about how she had declined to participate in the video clip for Trey Songz Pick Up The Phone. She spoke about how the singer then attempted to persuade her to participate by giving her food and alcohol before adding the weight of sexual intimidation in an attempt to get her to buckle under. Palmer went on to describe the situation, saying that she hid in a closet because she felt unsafe in her surroundings and that pointed out that even after she declined to be filmed, he disrespected her wishes by secretly filming her: “when you look someone in the face and they say “I understand. You don’t have to feel pressured to do the video” and they STILL put you in it, it is a violation.” The video was brought to her attention by a fan who had seen the clip.

This is preposterous. How am I in this video Trey? After you found me in a closet HIDING because I was so afraid of anymore conflict. Literally my last option was to hide because you all would not listen when I said I did not want to be in the video the FIRST time. Just cause you give someone food and alcohol and throw in a little sexual intimidation doesn’t mean they will buckle. Yet, you still disrespected me as a young women, whom you’ve known since she was TWELVE. YOU STILL, defied my wishes and in turn showed your lack of respect for a brand that took me fourteen years to build and put me in the video against my wishes. Come on bruh, I clearly said no and you said okay, yet I was being secretly filmed when you told me “let me just show you the idea”?? Wow. This is what I’m referring to in my previous post, this is the sexism and misogyny I refer to because if I was a dude, he wouldn’t have even tried me like this. Let this be a lesson to all, I’m not for the bullshit. I’m serious about my business and you will not use my likeness without MY permission. When you in front of a boss you treat them like one, like I treat YOU. NO MEANS NO!!!!!!! People have to listen to women and stop questioning them and their intelligence. Speak up, cause when you look someone in the face and they say “I understand. You don’t have to feel pressured to do the video” and they STILL put you in it, it is a violation. It would be great to be able to handle these things privately but why when they aren’t respected?

While the video has since been taken down, Songz took to Twitter to respond with: “Babygirl buggin. Point blank period. Got my number, coulda called, saw the cameras and the lights, heard action.” 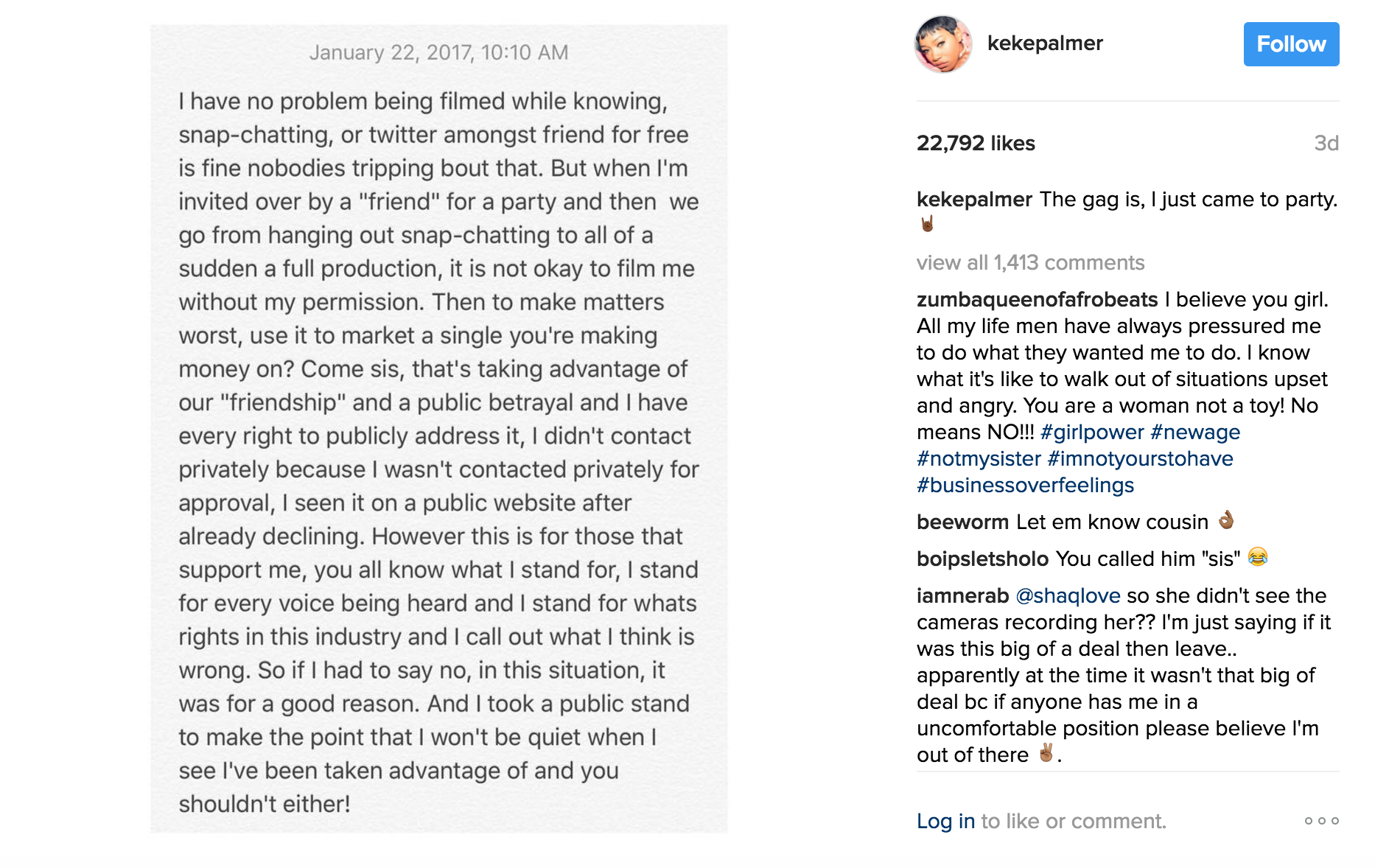