Haley Fohr thinks a lot about identity. In many ways, she has to. Known best as Circuit Des Yeux, Haley has forged her way into the hearts and ears of many. The last Circuit Des Yeux album In Plain Speech came mid-2015, but remains a timeless classic that envelops the listener in a pleasant and smooth cocoon of sound. Released to critical acclaim, In Plain Speech was proof that meditative music doesn’t have to be minimalistic and soft to be captivating.

This is where the question of identity arises. The emergence of Jackie Lynn as not just a character, but as a seperate person, has raised some interesting and difficult questions surrounding what it means to be a personality. To Haley, the difference between the two is very clear. To others, not so much.

We chatted to Fohr about identity, touring, and her time as each persona.

Hi! To get started, am I talking to Circuit Des Yeux or Jackie Lynn, and how are things at the moment?

*Laughs* Hi, you’re talking to Circuit Des Yeux! I just got home off a two month tour a couple of days ago, so I’m just fixing my finances and dirty laundry. Getting down to business.

Where has been your favourite place to play so far?

My favourite place would probably have to be Manchester. I played in a cathedral with Julia Holter and the sound was really good. There were about 800 people in just total silence. It was a really powerful night. And it wasn’t too far after the election, so people were really charged and open. The craziest thing I saw on tour would have to be… a clown! *Laughs* I saw this clown couple driving this tiny, tiny car on the Autobahn. I wasn’t sure how they fit inside, but it was totally ridiculous. Like they had huge wigs on, and big red noses and face paint.

You released something a little different this year. What inspired this alternate ego?

Well, I had been touring for just over a year for In Plain Speech and I was feeling a little heavy from the press and being on stage all the time. It was kind of like near continuum, where I was just seeing a rotation of what other people thought of me. And there was this building fear in me that I was forgetting how to have fun. So the Jackie Lynn idea was challenging to me in a cerebral way. I didn’t really want my brain to rot on the road, so I just started reading and coming up with this idea. I ended up writing the actual songs really quickly, in about three weeks. I tried to keep them short, and sonically I did what I wanted. We recorded them in about three days, and it was honestly the most fun that I’ve ever had making a record. And that was the whole point: To have fun. And Circuit Des Yeux is really emotional and personal to me, so Jackie Lynn was kind of a departure from that. I think it was a healthy one.

What was the transition between characters like? Did it change your creative process at all?

It did actually! With Circuit Des Yeux I’m very hands on with all the arrangement, and with Jackie Lynn I just play guitar and sing. All the arrangements are left to the backing band, so they could do whatever they wanted. Also, aesthetically, Jackie has a look; the way she carries her body is different than mine, and the way she talks is different than mine, and the way she sings and delivers lines is different to the way I do. So it really pushed me out of my shell and opened my up in a lot of ways. So yeah, it was challenging.

To me it’s so different, people in Australia sound like y’all get it. To be honest, people in America don’t get Jackie Lynn, what’s up with that? *Laughs* To me, it’s an obvious difference. Like it seems pretty clear that Jackie Lynn is Jackie Lynn and Circuit Des Yeux is Circuit Des Yeux. But it is not so, with a lot of interviews that I’ve been doing. So far in Australia it’s been really wonderful that people acknowledge the different identities, because to me it’s quite different. Especially in what I’m bringing to the table and how it makes me feel and what I’m giving to someone. 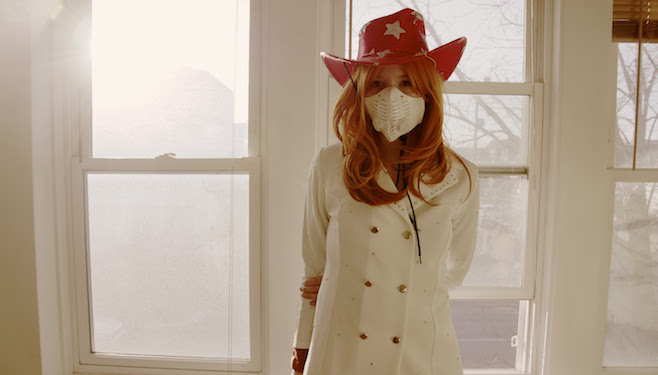 So is it a one-off project or something you envision to be continuous?

It’s hard to say. I do have an idea brewing, but that doesn’t mean much. I think Jackie’s next step would have to be pretty defined. It would have to feel like a necessity. Because even though Jackie Lynn is a departure from Circuit Des Yeux, it felt like a necessity when I made it. I hope to never put out records that sound frivolous. It’s always so charged with… something. Like something greater than just music. I just don’t know what that is yet.

Where did the idea for Jackie Lynn specifically come from? Did you want to portray a part of yourself, or did you just want to tell a story from a different perspective?

I wanted to tell a story from a different perspective. I came up with the initial idea when I was reading a Graham Parsons’ book and I was really into Dolly Parton along with this lady called The Space Lady. And I was in LA, having breakfast, and The Space Lady was playing, so immediately I just had this idea – it was more a sonic idea than a story; I wanted a cocaine-fried country album backed by Suicide. Something that incorporated some synthesisers, but sounded kind of fried out. The person I was having lunch with was an older gentleman, and he turned to me and said “That’s a terrible idea, do not do that.” So because of his response and the way my brain works, that equated to “Well I have to do this.” Which led me to doing some research and writing a short story and a few strong personality traits that I think a strong woman might have. But I also wanted to incorporate a younger woman, an entrepreneur. So I put down some trials and tribulations, whether that might be drugs, music or finances. Maybe she was a librarian or something. I wanted to portray that there are quite a few discrepancies now in America, especially with being a woman and being young, because I kind of felt some of that from time to time.

Yeah definitely. You mentioned a few influences before, where there any other that really helped shape the sound or the persona that you were going for?

It was fairly specific. I just wanted it to sound like Suicide meets like Emilie Ferris or something. I just wanted them to be easy, digestible songs. Nothing too heavy.

Was there any crossover between the two sounds and personas, or did you keep them very much separate from each other?

For me it was quite easy to keep them separate. Jackie does not do interviews, she is always unavailable unless someone has, like, massive amounts of money. She’s really just in it for the money and staying anonymous. When Jackie performs live there’s an outfit; there’s a transformation that happens. There’s this whole outfit and whole attire, and I only wear it when it’s time for Jackie. So, in this way, the separation is physical to me. It’s manifested in this outfit. And there are visuals and it’s a whole separate world to me. So it can be a little frustrating when I do interviews in America and people don’t understand. Or when my record label or booking agent don’t get that Circuit Des Yeux cannot play Jackie’s songs, and Jackie can’t play Circuit Des Yeux songs. To me it’s obvious, but it’s hard with promotion, or with sets to get people to understand. Especially during sets, when people keep asking me to conflate the two; it’s just not possible.

Finally, what are you most looking for when you come to Australia?

Everything! I’ve never been anywhere even close to Australia! We’re so far away from each other. Isn’t it crazy that we can talk like this?

*Laughs* Do you have anything particularly special in store for your Australian debut?

Yeah, for me it will be quite special, as I’ll be playing pretty much all new material that’s all unrecorded. And I’ll also be incorporating a new instrument into my live shows – a computer, which I’ve never done before. I’m having a computer built for it, and that will bring a whole new suite of crazy textural sounds that I’ve never been able to do until now. So I’ll be trying really hard to try and create this cool new set, and Australia will be the first one to hear it.