2016 has been another huge year for breakout grunge-pop artist Ali Barter. Following on from the release of her outstanding AB-EP in 2015, the singer has toured the country alongside the likes of City Calm Down, The Jezebels and The Rubens, as well as appearing at festivals including Laneway Festival, Fairgrounds Festival and Disconnect, and is about to play Beyond The Valley and a headline tour in support of her new single Girlie Bits. Between all the touring, she has also had time to send this essay viral courtesy of Junkee, in addition to scoring heavy triple J rotation. It’s been 12 months since we last caught up, so we figured Christmas was the perfect time to check in on how she was feeling.

2016 has been a huge year for you, what are some things that you have learnt from those bigger shows this year?

Playing with The Jezebels was really awesome because they have such a tight show. I haven’t done an incredible amount of touring in my life. I’ve had bits and pieces here and there but watching them is really great because they are so high energy and you can just tell that they have toured a lot. It’s just good to watch people who have done it for a really long time and just realise, cool, this is what can happen when you work really hard at something.

You just completed your own national run of dates to see out the year. Did you go about things any differently in light of those experiences?

It was kind of the first time I’ve played a full set, not just a support set. We played for a full hour, and I haven’t done heaps of that. It’s just about learning the audience, keeping them engaged, learning how to structure your set, just wanting to give the audience a really good time and thinking about the kind of things that wouldn’t bother you if you were a support act.

How did it go touring this year with the rest of your band? Has that changed the dynamic?

How did you guys all meet?

I started out playing open mic nights so I met some people through there, but I wanted to meet more people so I went to uni. That was where I met Andrew who is my drummer, and then Tyler, who plays bass, also plays with my friend Ben Wright-Smith. My guitarist also plays in Dorsal Fins and used to play in Eagle & The Worm, so he was this muso dude who played around a lot that I met through the scene. We just all came from our own funny beginning.

On Instagram, you have been sharing pictures from the studio. Is it ever a challenge getting your backing band on board with what you are doing musically?

I write all my own music, so I start off writing by myself and then I do some co-writing with other people before bringing it to the band. I’m lucky that they like what I bring to them, they are pretty chill. They just like to play music and they play with various other bands to so I’ve never had to deal with issues. They might think bad things but they never say it.

One of the highlights of 2016 for was collaborating onstage with Ecca Vandal for Triple J’s 10 years of Unearthed party. Are there any big collaborations coming up for you over the next 12 months?

You’ve said in the past that “classic songwriting” is what you really love and aim for. How do you define this personally?

I grew up listening to Frank Sinatra, my dad and I would listen to him along with Cole Porter and Geroge Gershwin and all those old standard writers. When I think of classic songwriting I think of really simple structures, like “verse, chorus, verse, chorus, bridge, chorus.” Song. Done. I also love pop music so I love a catchy hook or a tag-line, similar to Sia in Chandelier. I guess they are two artists that I look to. Country music also has classic songwriting. Stuff that has a really nice melody and simple structure, plus a message.

Do you feel that simple songwriting is a thing of the past nowadays?

No, I don’t think it will ever die. At the core of most music, you can find that simplicity. For example, some of those Flume songs are just dressed up in beats and this modern interpretation, but if you look closely, there is a really simple song in there. If someone wants to, they can sit down and play it with a guitar. I still listen to people like Cat Power, and people will listen to that stuff forever. It’s the same with The Beatles. A human singing a song with an instrument will never die.

Just to touch on your article you wrote concerning women in music, do you feel that artists have any type of responsibility to use their platform for activism?

I don’t think musicians have a responsibility, they should just do what they do. Obviously, if people want to speak up they should use what they have, though. I didn’t even realise that when it ended up being the Junkee article happened. I was just typing an angry Facebook post like every man and their dog does, and then it got some attention. I wasn’t doing it because I was thinking, I’m gonna stand up for women and change the world and blah blah blah. I did it because it was just a feeling I had. I don’t think anyone has a responsibility. Do whatever the fuck you want. I do think it’s a good platform though for people to bring attention to injustices or whatever.

Ali Barter will appear at Beyond The Valley over New Years – details here – and will be on tour in January: 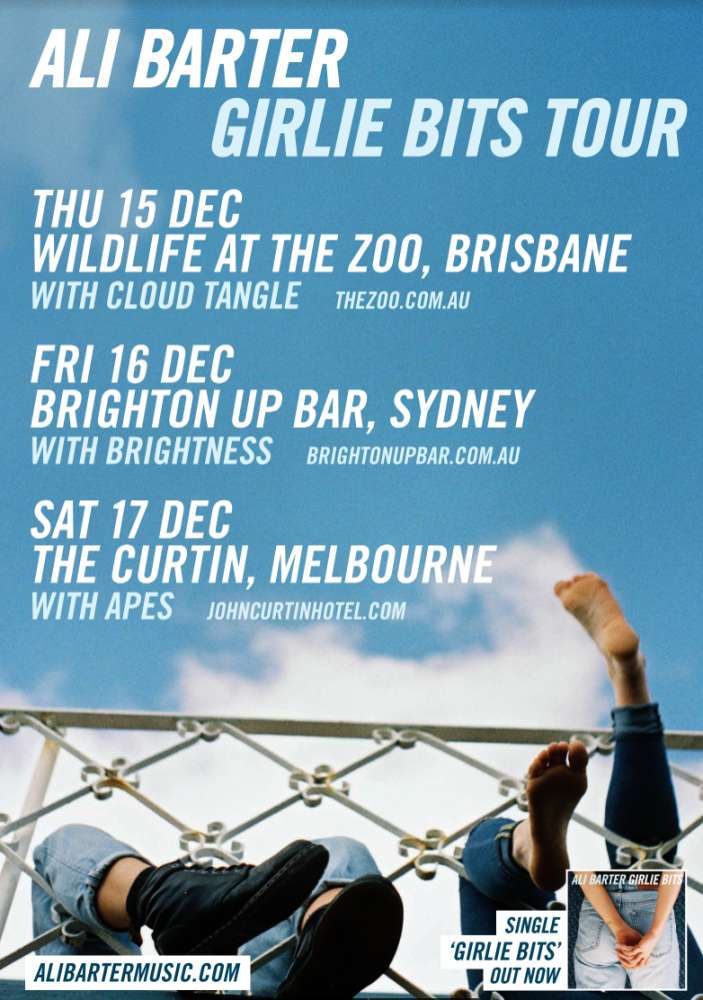