Frank Ocean has delivered his first interview since releasing Endless and Blond/e earlier this year. Speaking with the New York Times, the interview provides a little insight into the four year gap between albums, why he chose to not submit his music for the Grammy Awards, and the difference between being a famous person and having famous music.

The interview appears to have taken place on a drive in Ocean’s Tesla Model X, one of two cars he keeps at the hotel at which he currently lives in California.

He speaks about how he felt increasingly isolated and alienated after the release of Channel Orange, which ultimately led to living a fiercely private life away from the public eye. “Within my circle, there was a lot of places I thought I could turn that I felt like I couldn’t turn to anymore.”

He chose to move to London with almost no possessions or friends. During his time there, he lived in an apartment stripped of its furnishings, an environment he similarly created in many record studios, including the famous Abbey Road. Why did he flee to the UK? “If your house is on fire, you need to get out of the house.”

Although he has chosen to not submit his music for the 2017 Grammy Awards, he speaks about how performing at the Grammys in 2013 felt like a rite of passage. “Me saying yes to those [Grammy and VMAs participation] had a lot to do with how those things made me feel before I was actually in the business. And just wanting to be rubbing shoulders with those people and being seen at those places. I still was reluctant and sort of skeptical of those things because I questioned whether or not I was prepared.”

Later in the interview he talks more about his decision to not enter his albums for Grammy consideration, although the Grammys actually reached out to his team. “It just doesn’t seem to be representing very well for people who come from where I come from, and hold down what I hold down,” he says. Frankly this is a fairly confusing explanation, considering that, should he feels black artists are underrepresented, wouldn’t it make more sense then, to be the black artist who has a chance of winning?

“I think the infrastructure of the awarding system and the nomination system and screening system is dated,” he continued.

Wanting to hide, he even says that he’s jealous of Daft Punk for being able to wear helmets in public, although he’s “gotten used to being Frank Ocean.”

“[People] literally would yell out of an Uber, ‘Frank, where the album?'”

For at least a full year of the time between albums, Ocean had writer’s block, which ended after reconnecting with an old friend.

Interestingly, he notes that he wrote Channel Orange in just two weeks, and put a lot more thought into Blonde, including having 50 versions of White Ferrari, and considering the many voices and perspectives heard throughout the album, so exemplified by stylising the various voices with pitch shifted tones.

The perfectionism doesn’t stop here, though. Ocean said that during the recording of Blonde, he would carry all music, and all backups, in a backpack. Thank god he didn’t get robbed, right? “I’d rather the plane goes down in flames and the drives go down with me than somebody put out a weird posthumous release.”

He then speaks to the Times about his troubled relationship with Def Jam, about how Blonde was a one-off deal with Apple Music, and that in the time between his records, he changed management, publicist, lawyer, and almost all other professionals in his team.

“It started to weigh on me that I was responsible for the moves that had made me successful, but I wasn’t reaping the lion’s share of the profits, and that was problematic for me.” 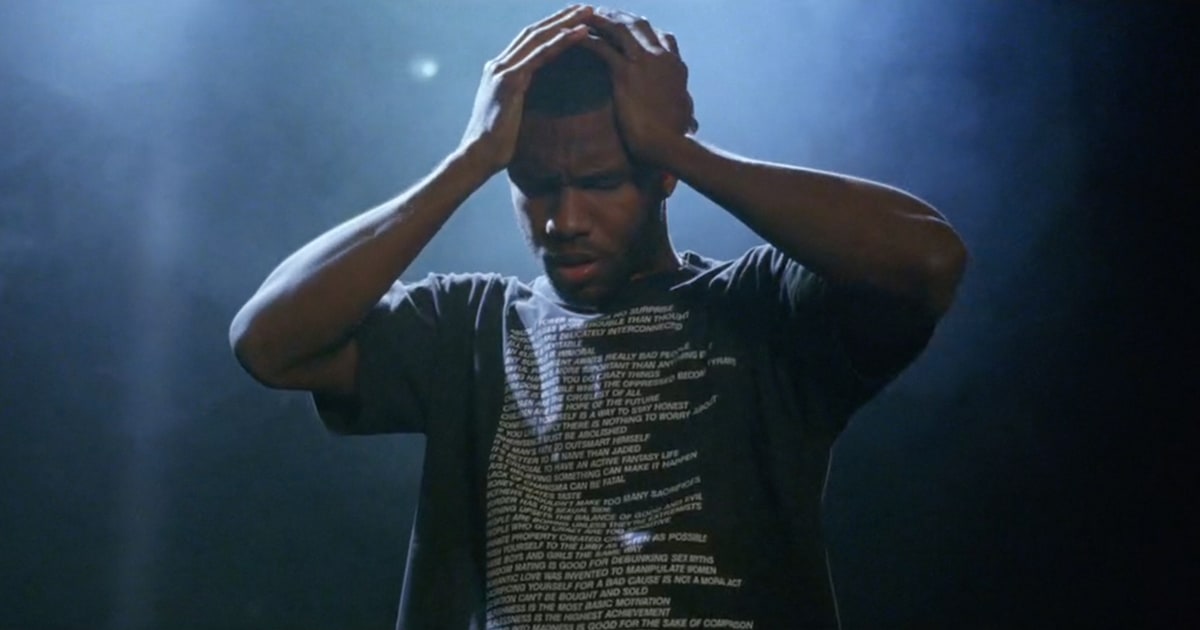 So where has he been in the months since its release? Everywhere, it seems, possibly including Australia. “China, Japan, Oceania, France, just around. Casual,” he says.

Other than travelling, he’s also been busy keeping track of numbers. He comes across a little more clinical than some might expect from the reclusive, artistic genius who has written one of the most emotionally powerful records of the year. “I know exactly what the numbers are. I need to know,” he says, speaking about record sales. “I need to know how many records I’ve sold, how many album equivalents from streaming, which territories are playing my music more than others, because it helps me in conversations about where we’re gonna be playing shows, or where I might open a retail location, like a pop-up store or something.”

From this, we can not only draw that he’s pretty meticulous when it comes to number-crunching, but that he is in fact planning to perform live at some point. Australia, listen up – you better stream the hell outta this album so that he comes here and performs.

He admittedly comes across a little snide in some aspects of the interview, but when you’re that talented, I suppose you’re allowed. Toward the end he talks about how he’s considering doing a visual arts degree. His mother reportedly said to him, “Oh, you don’t have time to do that,” to which he replied, “Mom, I’m rich!” referencing the “luxury of choice” afforded to the wealthy and successful.

Finally, he’s working on new music. Whether or not this new music will come out in four years or sooner is anyone’s guess, but there’s more Frank ocean music in the world, and that’s good enough news for us.