Last night on the American series of musical talent show The Voice, a murder was committed. It was a graphic affair, an utter butchering. The victim? Father John Misty‘s 2012 masterpiece Hollywood Forever Cemetery Sings. And who was the culprit? Well that would be contestant Aaron Gibson, whose rendition of the song sounded more like the death-knell of a Nickelback/Bon Jovi karaoke tribute band than anything close to music. But while this is an extreme example of the problem with many musical talent shows, should we really be surprised?

First a look at the performance itself. It was terrible. No two ways about it, it was just uncomfortable, from the overly gravelly lead vocals that obscured the lyrics to the hilariously woeful gospel-esque backing singers, to the decision to switch the folksy for a heavier, metal-leaning sound was inspired, sure, but it didn’t really work. Basically, it is a mess.

And Father John Misty picked up on it all, writing in a (now deleted) Facebook post “why God why.” 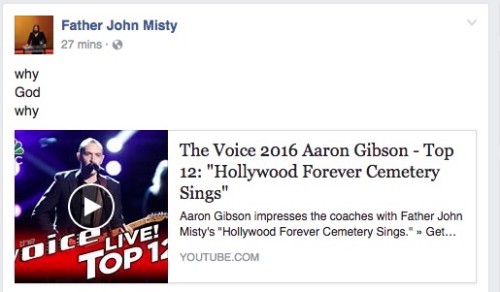 What followed It was then replaced with a series of sarcastic posts likening musical talent shows to politics, and people’s votes.

While hilarious, Father John Misty’s comments have a point: musical talent shows can be ridiculous, humiliating, destructive and plain stupid. Mnay people hate them, not because of some self-righteous belief about the sanctity of music, or some misguided idea that popular music is inherently shit. We hate them because they place technical aptness over any sense of creativity or artistic cohesion. Shows like The Voice or The X Factor give the wrong impression that a singer needs to be able to have insane range or be able to hit a crazy amount of notes in such a short space of time. All sense of theme goes out the window when the contestants’ sole purpose is to impress people with their voice rather than actually make music that sounds good to listen to.

Compare the atrocious cover with Father John Misty’s own version, and you’ll see what I mean.

The man send shivers down your spine with just a guitar and his voice. He holds notes, instead of fluctuating all over the place. It’s raw, and it’s cohesive. Maximalism only works when all the elements are working together and fit with each other. Chucking gospel backing singers with a metal-esque aesthetic and a voice so gravelly it sounds like a Gears of War character does not work. At all. And if you want good music to come out of a talent show, you need to start showing off artistic talent rather than technical prowess. Making something genuine has much more of “The X Factor” than being able to show massive range in the span of a 2 minute song.

And look, I don’t want to shit on Aaron Gibson too much. I’m sure that many, if not all, of the design choices behind that performance were out of his hands. And I get that life as a Shill-fish can be nice and easy. But anyone who thought that cover was a good idea was severely misguided. Ultimately, this song was another (albeit extreme) example of the utter disregard talent shows have for artistic expression.