Donald Trump may have rallied an unprecedented amount of support for his presidential campaign, but not so much within the music industry. In fact, more often than not, we hear about the artists who are actively opposed to him and his politics. While Barack Obama seems to only feature in the music press for his cool, eclectic taste in listening material, Trump has impacted music journalism far more than many other politicians – and much more negatively.

His run for office has been littered with pissed off musicians, as he appropriates their songs without permission or support. Dubbed the “Orange Clown” by R.E.M.’s Michael Stipe, Stipe also advised Trump to go fuck himself after It’s The End Of The World… was used at a Tea Party rally. Adele, Neil Young, Aerosmith; all well publicised for denying Trump the use of their music. But even further than that, we are seeing more and more musicians speak out directly against Trump as a political candidate, and even produce anti-Trump music.

Eminem’s latest release Campaign Speech hit just this week, an eight minute long political tirade that pointedly rips at Trump. So much so that most of the coverage has focused exclusively on the anti-Trump messaging. Death Cab For Cutie also released their own anti-Trump narrative track, Million Dollar Loan, this week. Even The White Stripes reunited to release “Icky Trump” merch, playing on their 2007 album title Icky Thump.

For anyone mourning the decline of protest music, these really are incredible rallies from artists against a political situation. In particularly vicious move, Kanye West’s producer Mike Dean ran with the vile recordings of Trump that came to light recently, remixing his words into “The Official Donald Trump Jam”; GRAB EM BY DA PUSSY.

So what do all these artists have in common, besides an understandable distaste for the Orange Clown? So far, the artists really addressing the specifics or Trump’s politics are mostly men. Of course, there are a number of female musicians making their political voices heard, taking to social media to express what so much of the rest of the world is thinking. But very few female artists are making the same direct statements or going as far as to produce anti-Trump material.

Cher’s twitter feed has been consistently filled with short but sharp rants against Trump. Miley Cyrus has also made her concerns very clear, and her fear for America if Trump were to become President. Adele forbade the use of her music, and Madonna even had a piñata made in Trump’s likeness for her son to take a few swings at on his birthday.

Any musician taking a political stance knows that aligning themselves politically is likely to cost them fans – and ultimately sales – somewhere. Commonly known as “shut up and sing” syndrome, not every music fan wants to mix politics with entertainment. And as musicians, no artist should feel bound to get involved in a political discussion.

However, we have to ask the question why female artists are seemly more hesitant to take a more outspoken stance against Donald Trump? And we do need to ask because Trump can easily be held up as the most openly sexist and misogynistic presidential candidate in recent history. One whose political aspirations are not fantastic, but a man who is actually in the final running for leadership of one of the most influential nations.

In the last month alone, we have been privy to the disgusting “locker room banter” that pretty much advocated the assault of women, and insulted them with the idea that women will accept sexual advances unasked and purely because of a man’s celebrity. And any woman listening to the most recent debate cannot fail to have been frustrated to the point of yelling at their computer as Trump embarked on his ill informed, scaremongering tirade against abortion rights. A C-Section is a very different thing to an abortion, you orange faced prick… And that doesn’t even begin to cover the many horrendous comments Trump has made over the years. 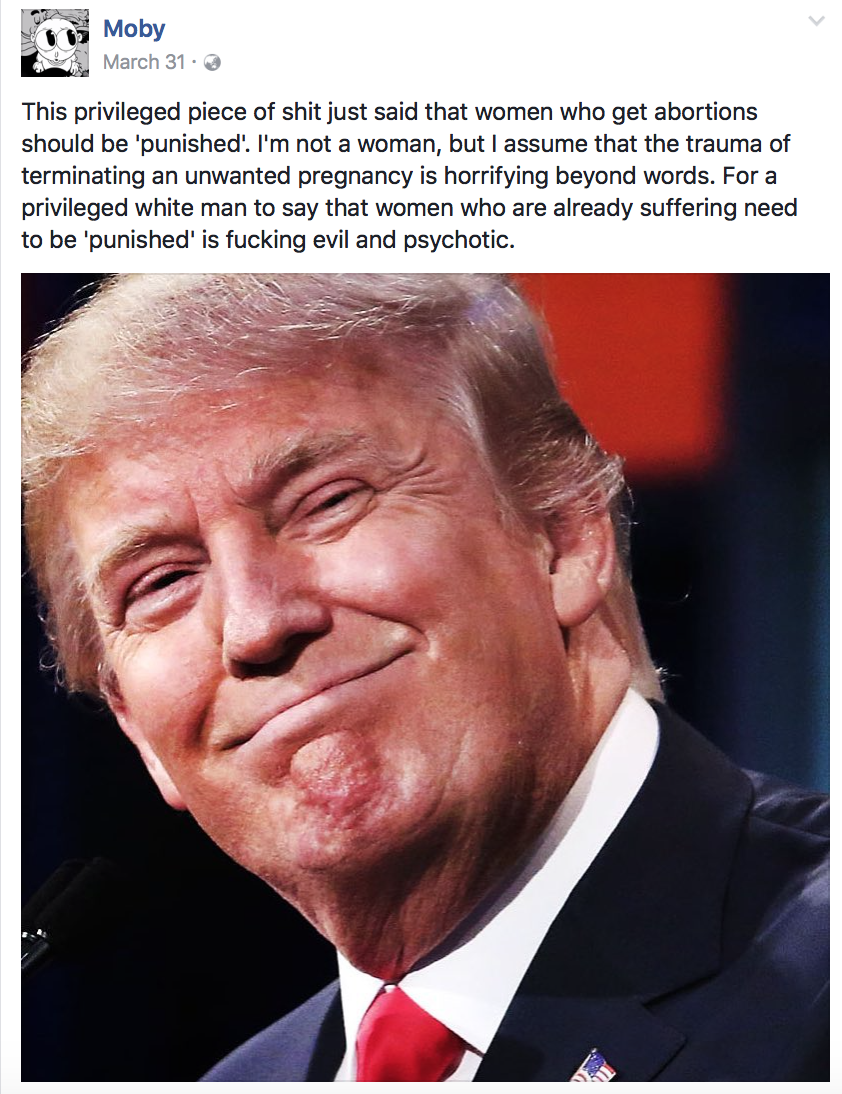 Like it or not, The Official Donald Trump Jam is more than direct, and it is an undoubtedly incredible thing for an artist like Moby to call out Trump as “ a privileged piece of shit”. But why do male musicians appear to be more outspoken on what are definitely feminist issues?  Do their reactions get promoted more widely, or is it because women are not publicly voicing their concerns as openly?

Lady Gaga openly praised the women who came forward to accuse Donald Trump of sexual harassment and assault, in the midst of a number of people questioning why these women had not spoken out sooner. Perhaps the answer to that question is close to why female musicians find it that much harder to really speak out. Those women were immediately targeted, insulted, threatened and disbelieved.

Trump surrogate @heytana says accusers can't be believed bc real victims talk right away. No they don't, bc people like you call them liars.

Amazing how they all come forward at once…almost as if it was choreographed. Right? #NextFakeTrumpVictim https://t.co/HhAlHfV85A

You know what is TRULY offensive to women. Making up FALSE claims of sexual assaults. That's what's TRULY disgusting. #NextFakeTrumpVictim

The fact that women who speak out are targeted more often, and more aggressively, than men who make similar statements, is pretty well documented. Especially across areas that are perceived to be male dominated. Politics is unfortunately still perceived by some as one of those areas, and conversely, women in music are too often seen as only ornamental. These two battles combined make for a peculiarly difficult arena for female artists to enter.

Powerful women in music are lauded for their confidence, the way they present their characters and the way the exhibit amazing self respect and integrity. Are those not the same attributes you might use to describe a powerful woman in politics? The entertainment industry has an inherent glamour, but that also shouldn’t devalue all of those things, or exclude women from having a political voice should they wish to.

Daily reminder that Taylor Swift has yet to comment on the election or Trump re: sexual assault + sexism. Epitome of white feminism.

It’s actually understandable that they may not wish to. The price of celebrity could be calculated as lack of privacy plus social responsibility minus choice in the matter (and the answer does not equal pussy grabbing Donald, that was never part of the equation). However, as musicians, women – or anyone for that matter – are not obligated to become political figures. But faced with the possibility of Trump for president, I cannot help but wonder if female artists are holding back from being as outspoken as their male counterparts?

Gender should never restrict who speaks out for what causes; feminism is not only for women, LGBTQ rights are not only to be championed by those who identify as part of that community, and minorities should not be the only ones fighting against discrimination. But as a woman, how can you not be ready at least question such sexism and misogyny in a potential world leader?

With women in music advocating for feminism, like Lorde, Taylor Swift and Beyoncé, it does seem that there should be more direct action from female artists. Generalised disdain is well and good, but it doesn’t address the actual threats that Trumps campaign really poses to women. It is more than frustrating to think that these women hold back because the damage to their careers will be exponentially bigger than to the men who champion the same causes. Or that they will face increased aggression and violence, simply by virtue of being women who dared to speak out.