My initial introduction to Nirvana is hardly different from most people’s: an image of a baby floating across a chlorine blue backdrop, reaching after that elusive dollar note. 2001 was the era of CDs and Discmans. Music came passed down to me from my older brother, and Nevermind was no different. As iconic as Nevermind was, and is, it wasn’t the record that really got me hooked on Nirvana.

Hearing Smells Like Teen Spirit and Lithium for the first time, I wanted to like it. Aged thirteen, we were just starting make tentative steps away from the prescribed life given to us by school and our parents. It was the first faint stirrings of teenage rebellion and grunge and punk rock was the soundtrack. Unavoidably cool compared to the current diet of Aqua, Steps and 5ive, that burgeoning spark of self-expression latched onto Nirvana as a step towards something a bit different.

While gazing, without any real comprehension, at the artwork through the jewel case might be pretty standard, I reckon not many people can say they really fell for Nirvana at church. But I did.

“That’s where his balls have worn through his jeans”. We were poring over the sleeve out of my copy of Bleach, typically and pointlessly lusting after photos of Kurt Cobain as only thirteen year old girls can. That elucidating comment came from a boy with greasy blond hair, still short to fit a private school education, unlike his baggy Bolt jeans and black wristbands. 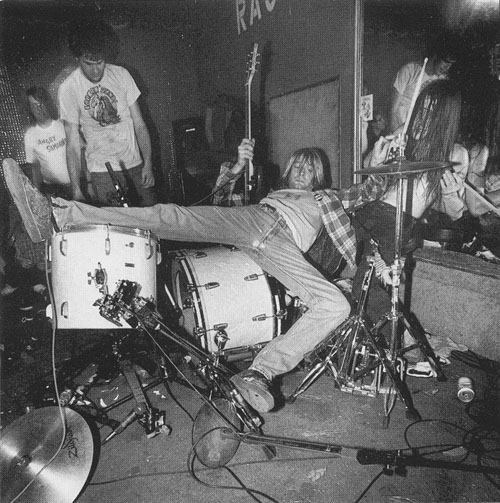 On Friday nights, a school friend of mine was encouraged to attend a church youth group by her religious parents. I still don’t know whether I feel sheepish over how we turned that into an opportunity to meet boys, but we did. We certainly weren’t there to learn about Jesus. For some reason, Christianity seemed to draw a specific faction of teenagers who were mixing grunge and God. Boys in eyeliner who played electric guitar or drums (badly), and somehow religion got mixed up in that trend.

Still years away from iPods, you could well be judged on the CDs you carried around with you, which is why that week I had taken Bleach with me. And I was judged, mostly by the same blond kid who did not for one second believe that I really understood Nirvana. Had I been holding Nevermind I would have conceded that, but something about Bleach genuinely did strike something in me.

Not everyone agrees. As their debut album, Bleach is the record that Cobain was most dismissive of. First released in 1989, the record was critically acclaimed but failed to chart until its re-release following the astronomical success of Nevermind in 1992. Cobain often claimed that in writing Bleach they felt like that had to conform to the accepted style of grunge fostered by Seattle, the available fanbase and their label Sub Pop.

Comparative to their live performances, Bleach was often described as sparse and far less manic. Cobain once said of the album that he “”didn’t give a flying fuck what the lyrics were about” and “It was like I’m pissed off. Don’t know what about. Let’s just scream negative lyrics, and as long as they’re not sexist and don’t get too embarrassing it’ll be okay. I don’t hold any of those lyrics dear to me.” But that’s almost the magic of it, the bleakness and the disposability is so tangible. I sometimes think that in an attempt to conform, a word that never sat comfortable in Nirvana’s lexicon, they actually spawned something of their own.

Bleach is far from nonsense or stream of consciousness; rather it is more like the psychotic mutterings of the subconscious. Much like Nevermind, the record is filled with short stories and it feels like listening to well worn fascinations and complaints. The delivery might have been careless, but the subject matter has been chewed over many times.

We know too much about Nirvana and Cobain to dismiss tracks like Negative Creep and Downer as just lyrical fluff. Back in 1993 the world was just recognising the strange figure that Kurt Cobain cut and only just beginning to see the point of Nirvana. Over two decades later their history has been so dissected that you have to draw the parallels. Listening as a teenager though, I didn’t know all this. I just knew that what I was hearing was tapping into something very primal. And I hadn’t heard much music that could do that at that point.

Musically, the album is incredibly bass heavy, launching with that looming riff from Krist Novoselic on Blew. Immediately menacing, that is perhaps the aspect of Bleach that sets it apart for me. Nirvana’s catalogue may be riddled with angst and anger, but on no other record do they really hit the same depth of lurking aggression. The intro to Floyd The Barber still nudges my pulse to play copy cat to the off kilter rhythm.

I am a sucker for melody, I admit. Bleach is less crashing guitars than Nevermind, cleaner than the hectic Insesticide and probably lacking the introspective beauty of In Utero. But it does somehow bridge the gap between Cobain’s frenzied internal monologue and the elements within the band. Love Buzz was the first single from the record, and even just the opening riff as it slips from the hypnotic, picked guitar to a steely drum beat and then the pounding riffs and shredding. Constrained it might be, but thin it is not.

Whether it is is simply nostalgia for those teenage years, something about that riff for About A Girl, just a simple Em / G chord progression, flips a switch in me. Despite our awkward beginnings, I ended up joining a band with the same blond kid who had been so rude to me. He grew his hair to look like Cobain, and the first song we ever recorded was a cover of About A Girl.

Writing for Sounds magazine, Keith Cameron said of About A Girl that it “was exhilarating and it was exciting because that was the nature of the music, but there was also an almost palpable sense of danger, that this whole thing could fall apart any second”. He may have been talking about just one song, but for me, that is Bleach in its entirety.

There’s a swing to the rhythm of About A Girl that clashes with the straight feel of grunge, but in a way it’s a precursor for Rape Me with its repetitive melody and lyrics. And actually in many ways, Bleach drops so many hints about the music that Nirvana went on to record. Negative Creep holds the same thrashed out, relentless energy that pummels through Nevermind. Love Buzz has all the mysticism of In Utero, and Mr Moustache is like the frenzied rock n’ roll that happened across so many B-sides, and also Insesticide.

At the heart of it, Bleach marks the moment that I really stepped outside everyone else’s influence and made my own decision about something I liked. It’s as simple as that – because something about the music genuinely resonated with me. Nostalgia is a powerful thing, but it isn’t the only reason that I’m still listening to Bleach even as I turn thirty.

We might have made an uncomfortable start, he may even have swung a bike chain at me once upon a time, but that smart arse blond kid became my best friend. He still is to this day. And we still agree that Bleach is Nirvana’s best album. 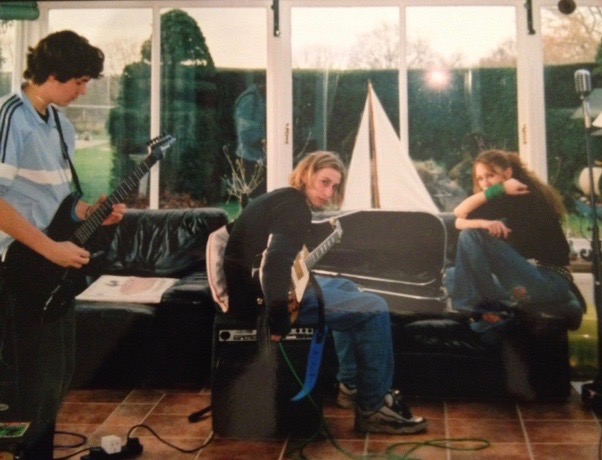