White has come out of hiding to release a special all-acoustic compilation record, bringing together original and new acoustic recordings of some of his personal favourite tunes from The White Stripes, Raconteurs, Dead Weather and more.

During a promotional interview with NPR, they discussed a range of topics, including his collaboration choices, notably Beyoncé and their phenomenal Lemonade cut Don’t Hurt Yourself.

The interviewer pushes harder for a Beyoncé quote, asking White if it came about through his co-partnership with Jay Z on their streaming service Tidal.

“You know, I just talked to her and she said, “I wanna be in a band with you.” [Laughs.] I said, “Really? Well, I’d love to do something.” I’ve always loved her voice — I mean, I think she has the kind of soul singing voice of the days of Betty Davis or Aretha Franklin. She took just sort of a sketch of a lyrical outline and turned into the most bodacious, vicious, incredible song. I don’t even know what you’d classify it as — soul, rock and roll, whatever. Don’t Hurt Yourself is incredibly intense; I’m so amazed at what she did with it.”

Don’t Hurt Yourself is certainly one of this editor’s favourite songs of 2016; to hear her usually refined vocals screech and roar their way through the track, backed by White’s guitar and a huge, stompy beat, it is indeed incredibly intense.

White was one of only four features on Lemonade, along with James Blake, The Weeknd and Kendrick Lamar. But his history with Jay Z, and ultimately Beyoncé goes far further than Tidal; in 2015, Third Man Records released an exclusive special edition vinyl of Magna Carta Holy Grail, for one. The pair have also worked on at least one track together years prior, with rumours abut the mysterious Ray Bans, which has still never seen the light of day, stretching back to at least 2010. And as seen below, they’ve been kickin’ it since well before that too. 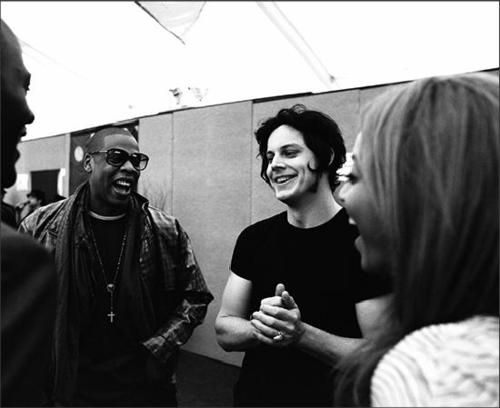 Bey, Jay and Jack at Glastonbury Festival in 2008. Image: Pinterest

Obviously his work with Jay Z isn’t a direct link to Beyoncé except for the whole marriage, life, most powerful celebrity couple in the world, thing. Considering Bey and Jay will probably release a joint album to round off their incredibly well-marketed series of relationship ups and downs, you never know – may they’ll enlist White for production. One can dream, right?