Aphex Twin has taken listeners through the entire spectrum of emotion since day one. From random, anxiety-riddled beeping to ambient, womb-like trance music, Richard D. James has done it all. Combined with his reclusive persona, you simply cannot Google him without a creeping wave of mystery staring back at you. There’s everything from an unexplained infatuation with military vehicles to remixing a Craig David song just to piss him off. The truths and myths of Richard’s enigmatic persona have remained mysteries for decades. Is it a ridiculously long-winded publicity stunt or he is just genuinely bonkers?

I remember one of my first experiences with Aphex Twin was listening to the song Rhubarb along with a fan-made video. I was about 16 years old, wielding a very weak joint, very warm beer and listening to ambient electronic for the first time ever. I felt like I had finally understood the genre hype and that this cool Richard dude must be the enlightened John Lennon equivalent of our generation – literally sweating out good vibes and humble positivity. No, I’m serious.

This track comes from Selected Ambient Works Volume II and was released in 1994. I’d since dabbled in other trip-hop and minimal electronic stuff, always nodding my head at that album if anyone asked how I got into the genre. I’d always hear the same response when I mentioned Aphex Twin. “He’s one of the most influential producers out there. So strange and otherworldly. Maybe terrifying – definitely creepy.” This always shocked me because I had an image of him burned in my mind as a Jesus-like figure, perpetually surrounded by Danish milk maids and adorning a crown of daffodils.

Then I saw the film clip for Come To Daddy. It was a lot like a mug of warm milk. Except the mug immediately shattered on the floor and the milk had expired last month. It was unnerving, hideous and came entirely as a surprise.  It was also Chris Cunningham’s directorial debut and ended up being critically acclaimed as well as banned. It doesn’t even show anything particularly graphic, it was banned because it’s simply.. ugh.

Why do I always decide to watch that video at 2am? Every damn time. It’s somehow since become a favorite to whip out at the end of a big night when everyone is too paralytic to communicate verbally. It’s also to blame for piquing my interest in Richard D. James’ personal life. Even seeing the thumbnail for the video made me want to know everything about the guy.

There’s a saying that goes “most people are better in the abstract”. Richard clearly heard this quote when he began making sounds at the ripe old age of 11 and decided to remain as frustratingly in the abstract as possible for the rest of his career.

Richard did an interview with Spain’s biggest newspaper in 2011. The poor reporter asked him how he felt about his relationship with the public. He replied, “I hate them.” In response to being asked what he looks for when composing ? “Nothing.” And how about the solid intrinsic indication that a song is complete? “When I’m sick of making it.” Straight from the Gregg Popovich playbook of abrasiveness.

In 1996 Aphex Twin released Girl/Boy EP – featuring a photo of his brother’s grave on the sleeve. 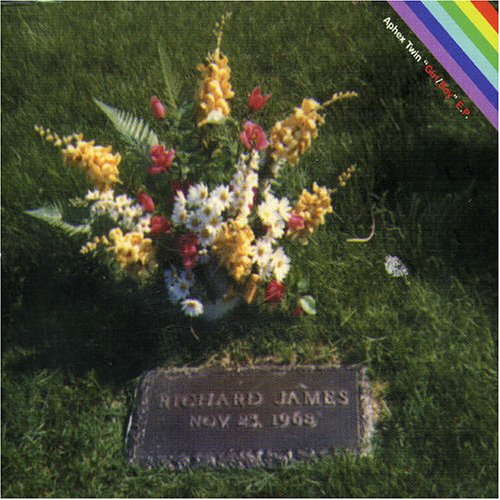 You’ll notice his brother shares his own name. In an interview he eerily explains that the photo choice was a kind of tribute to his brother who died at birth.

“It’s not like I have a big hang up about it or anything. I just think it’s tight because my mum was so upset about it when he died that she kept his name on but forgot about him, thinking “the next boy I have, that’ll be him.” So I sort of took his place as if he didn’t exist. That’s why I feel tight.”

In another interview, Richard talks about his near-collaboration with Madonna. Along with Bjork, the Queen of Pop had asked to work with Aphex Twin. Richard was initially interested in the idea but turned her down after realising she wanted him to make a song for her album, not vice versa. Richard had already written a track with her in mind on his Rephlex album. Madonna’s interest watered down when Richard stated he “just wanted her to do stupid noises” and that “there wasn’t going to be any singing on the track. Just like grunts and moans and pig impersonations.”

His creative process is a direct reflection of his bizarre personality. In an interview with Groove he was asked to comment on the transition between software and hardware in his music production and stated:

“I’ve actually recently hired a Chinese programmer to make a music software for me. It’s taking the concept of mutation into music software. You give the program some sounds you made and then it gives you six variations of it and then you choose the one you like most and then it makes another six and it kind of keeps trying to choosing the variations by itself. It’s a bit like that, but more advanced, but basically it starts with a sound, analyzes it, then does different versions of variations. It randomizes, it compares all of them to the original and then it picks the best one. It sounds totally awesome, but it needs to be tweaked a little bit. I will continue with this. I have a whole book full of ideas for software and instruments.“

Although it’s hard to find any concrete truths when it comes to any part of this elusive man, it is clear that he has found a perfect medium to express his eccentric personality. With hints that he’s sitting on over a thousand unreleased tracks, we can comfortably expect more confusion in the future. Though demystifying Richard D. James is a near impossible task, he has been hugely influential on electronic music in the past few decades and is likely to keep changing the game in years to come.

He recently released his first video in 17 years and had it directed by a 12-year-old kid. Check it out here.