David Bowie will forever have a special connection with the city of Berlin. That connection has now been formally recognised by the city itself, with mayor Michael Muller unveiling a new plaque in commemoration to the musician this morning, Associated Press reports.

The plaque was erected outside the apartment where Bowie lived between 1976-1978 in the suburb of Schonegerg, an area which, despite now being the location of generic businesses including a dental practice, turned into a shrine in the subsequent weeks following his death in January of this year.

An artistic hub of new and bold ideas throughout the latter stages of the Cold War, Bowie famously moved to the divided city in 1976 with Iggy Pop and spent the next few years expanding his creative palate and overcoming substance abuse.

The former two albums were recorded in the city itself, and whilst Lodger was recorded in Switzerland, the content still represents the period of growth Bowie experienced in the city. The plaque quotes the song Heroes, with the line “We can be heroes, just for one day” etched into memory forever. 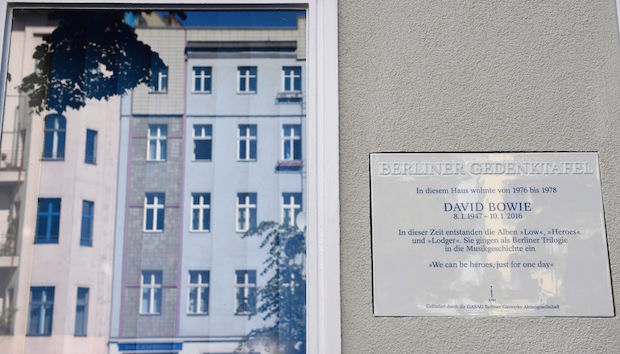 The commemorative plaque dedicated to musician David Bowie reading ‘In this house lived from 1976 to 1978 David Bowie. During this time the album Low, Heroes and Lodger have been created. They were storied in music history as the Berlin Trilogy’ is displayed at the artist’s former appartment in Berlin in August 22, 2016. / AFP / TOBIAS SCHWARZ (Photo credit should read TOBIAS SCHWARZ/AFP/Getty Images)

Bowie himself has noted that the song was inspired by seeing his producer at the time Tony Visconti kiss his girlfriend against the Berlin Wall. Watch Ewan McGregor perform a stunning rendition of the song here.