Ah, feminism, the movement-cum-buzzword of the decade. Thanks to the power of roaring female frontwomen, punk is no longer a genre exclusive to males. The prevalence of females in punk has since skyrocketed – particularly in the last few years. There is a plethora of different tactics that bands can employ to make a feminist statement, some much more aggressive than others.

A few months ago I went to The Brightside to see kickass Perth punk band Tired Lion. Lead singer Sophie Hopes crept onto stage and launched into a delicious sludgy riff. Playful and warm, she seemed more kitten than lion. Halfway through their set, a small ugly chap decided to yell a slurred comment about her body. The band finished the song and stopped playing. Hopes scowled into the crowd. The punters watched expectantly. After the silence gave all the sludge punks their fourth ear piercing, Hopes growled quietly, “who the f*** said that?” Much to the dismay of the little ugly man, the cat-call did not have Sophie purring like a lion with a jaw full of venison.

The audience were shocked to find the eloquent boy speechless. He stayed mute while Hopes flipped the bird in the general direction of the raucous titty-tooting. Tired Lion played a few more songs – the audience absolutely turnt on Hopes’ badassery. The mosh only consisted of 15 to 20 people but it had started to take the inevitable testosterone turn.

Hopes noticed the girls retreating to the sidelines while the fellas released their inner simians. She responded by telling ALL the males to leave the mosh and let the girls in.

I was almost expecting her to light a candle and read us a chapter from Simone de Beauvoir. Instead she told a hilarious anecdote that we’re all too familiar with. She was saying how annoying it is that even when you go to Woolies in your pyjamas to buy an avocado, there’s always a chance you’ll be pestered.

When every girl groaned in agreement, the tension in the room was so thick the ugly man almost commented on its figure.  By this point, Hopes had verbally castrated the heckler without even actively addressing him. 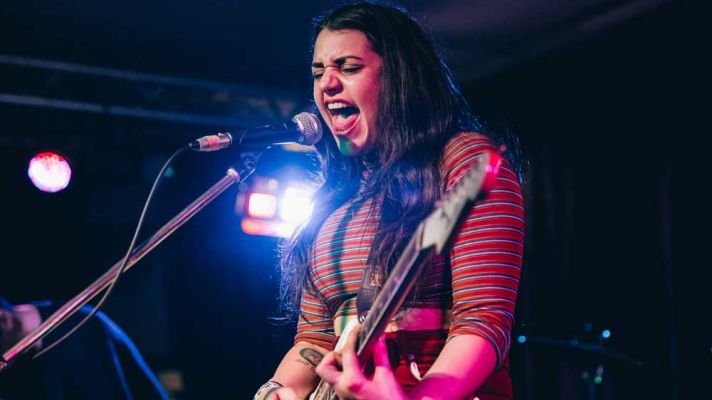 It’s no secret that over-the-top stunts are an effective way to make a point. That being said, I did feel for the genuine male fans who were quietly bopping in the front and were asked to leave. I guess it’s easier to separate males from females than genuine listeners from sex-depraved hounds, though I do think that associating certain behaviours with gender is a step backwards.

I must admit this show was responsible for making me aware of the potential influence an artist can have. In a measly 2 hours she had empowered every female in the room and robbed a degenerate of his voice and with it, his potential to degrade.

Hope employs a technique that leaves no grey area. It is simple, powerful and to the point. Her music reflects her unapologetic demeanor. She consistently highlights that her views take prevalence over her popularity.

Melbourne born truth-tellers Camp Cope have enjoyed a sudden burst in popularity this year. They have used their newly found acclaim to launch a range of events to empower females and all members of the LBGTQI community.

Lyrically speaking, their most recent self-titled album beautifully explores the bone-crushing characteristics of anxiety, depression and depersonalisation  – only ever hinting at the perils of being female with lines like:

Hearing catcalls from police cars.
And they say “What you gonna do about it dressed the way you are?”
There’s a very common lie.
They say you’re asking for it when you’re walking home alone at night.

To me, this makes the three humble legends even more admirable. This incredible social activism proves feminism is very important to them but instead of perpetuating the stereotype of male-hating butch women constantly looking for an argument, they focus exclusively on empowerment and the shame that comes with being objectified.

Their most recent endearing stunt was organising an all female lineup at Hermanns bar at the University of Sydney to take place on 21st August. As if promoting female artists wasn’t enough, all of the proceeds went to the Safe Steps Family Violence Response Centre – an organisation supporting women and children who have been victims of domestic violence.

The Flangipanis use an extremely aggressive approach to help demystify the female body and destroy the delicate, fragile and hopeless stereotype we’ve been battling for decades. The music video My Period Is Late managed to contort faces all over Australia.

At first glance their shock approach seems like a piss-take, but the three pioneers had the last laugh. Their video left a heap of conservative Australians openly discussing menstruation and feminism. Our little punk band Doozy Daze were stoked to share the stage with these Earth-shaking legends in July. I was shocked to discover Jodie had the gentle persona of a denim-clad puppy. On stage, her raw female power exploded outward with such ferocity I had to keep checking that the roof hadn’t blown off.

Early last month, the Flangipanis were confronted with a less than savoury character who popped his finger into an unsuspecting girls bum. After reading their response, I would not want to be that guy. 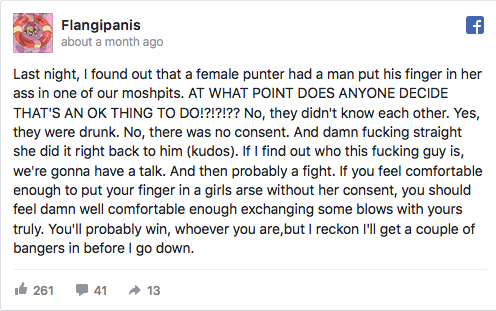 Almost every female has been affronted with degradation at some point in their life. Whilst there are horrific incidents that most functional humans would agree are fundamentally wrong, it is also important to confront the smaller everyday mishaps that are so entrenched in our culture. Every human being has the right to feel safe and there’s still a long way to go. These three bands are fucking phenomenal, not only at shining light on the issues that compromise women but also offering a solution to them.

Music in itself is a statement but to go the extra mile in social change and awareness is what sets these inspirational women apart from the rest.