Last year, Ariana Grande made headlines over footage captured of the Dangerous Woman singer licking donuts in a tray on the counter of a store called Wolfee Donuts, proclaiming “I hate America.” How could anyone forget? 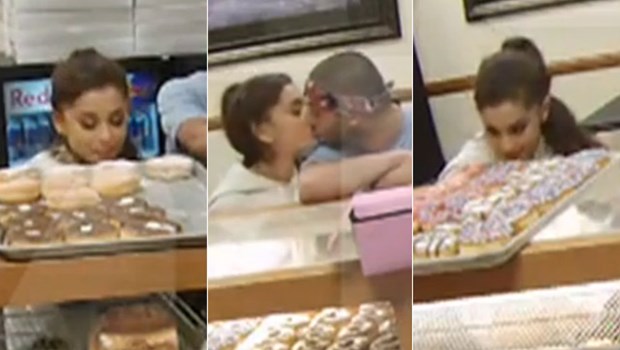 Now, WikiLeaks have released thousands of emails from the Democratic National Committee, among which was found a detailed email chain showing that this incident cost Grande a performance at The White House.

In the emails, Grande is vetted for a potential concert. The remarkably detailed research then outlines the incident in incredible detail, making mention of her licking the donuts “maliciously,” and noting that no criminal charges will be filed. It also goes on to talk about how she stood up for her gay half-brother, who was the recipient of online criticism.

Initially giving her a pseudonym – Ariana Butera – the vet is summarised by explaining that, “video caught her licking other peoples’ donuts while saying she hates America; Republican Congressman used this video and said it was a double standard that liberals were not upset with her like they are with Trump who criticized Mexicans; cursed out a person on Twitter after that person used an offensive word towards her brother.” 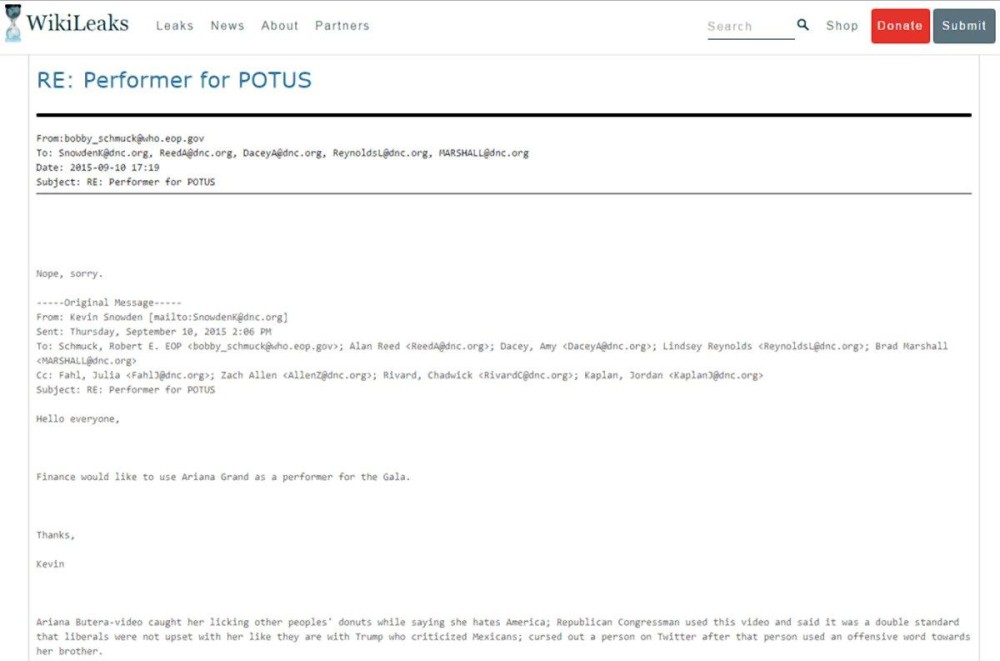 Recently, Kendrick Lamar and Janelle Monae both performed at the White House’s 4th July celebrations – so it’s safe to assume that neither party have been busy licking donuts that weren’t theirs to lick. At least not in public, anyway.

You can read the entire transcript below, via Gawker.

Finance would like to use Ariana Grand as a performer for the Gala.

Ariana Butera-video caught her licking other peoples’ donuts while saying she hates America; Republican Congressman used this video and said it was a double standard that liberals were not upset with her like they are with Trump who criticized Mexicans; cursed out a person on Twitter after that person used an offensive word towards her brother.

Police in Lake Elsinore, California said in a statement Monday that the owner of Wolfee Donuts, where the licking took place, declined to press charges against Grande. They say their investigation was primarily to help the Department of Health, which lowered the restaurant’s grade from an “A” to a “B” for leaving the tray of doughnuts exposed.

In the second of her two YouTube apologies posted last week, the 22-year-old singer said she was “disgusted” with herself and wanted to “disappear” after TMZ posted the video.

In another online apology earlier in the week she expressed regret at saying “I hate America” in the same video.” (The San Mateo Daily Journal-July 15, 2015)

Police in Lake Elsinore, where the doughnut shop is located, said they and Riverside County public health officials were investigating the leaked video, which appeared to show the 22-year-old singer and a man with her “maliciously lick” the doughnuts.

Mayra Solis, 22, a cashier on duty at Wolfee Donuts when Grande went into the store, said the singer didn’t purchase any of the doughnuts she licked.

“She was really rude,” Solis told The Associated Press.

Earlier Wednesday, Grande said in a statement to the AP that she’s a proud American.

“I am EXTREMELY proud to be an American and I’ve always made it clear that I love my country. What I said in a private moment with my friend, who was buying the doughnuts, was taken out of context and I am sorry for not using more discretion with my choice of words,” the statement read.

In the video posted Tuesday by TMZ, Grande says “What … is that? I hate Americans. I hate America” when a tray of doughnuts appears in front of her.

Grande said she chose to express herself as she did because she leads a healthy lifestyle and is upset with “how freely we as Americans eat and consume things without giving any thought to the consequences.”

“The fact that the United States has one of the highest child obesity rates in the world frustrates me. We need to do more to educate ourselves and our children about the dangers of overeating and the poison that we put into our bodies,” she said. “However I should have known better in how I expressed myself; and with my new responsibility to others as a public figure I will strive to be better.”

Asked about the police investigation, Grande’s representatives said she would not have further comment.

Dottie Ellis-Merki, a spokeswoman for the Riverside County Department of Environmental Health, said the agency was investigating why the doughnuts were left out unprotected and exposed to the public, in violation of state food laws. She said investigators found no further issues at the shop on Wednesday.

“During the investigation, the manager did state they normally don’t leave donuts out like was shown in the video,” Ellis-Merki said in an email to the AP. “The employee went to the back to retrieve freshly made donuts by request of the customer and left the trays out while getting other trays.” (Associated Press Online-July 9, 2015)

Frankie Grande initially hid the fact he is related to the singer/actress by adopting his father’s last name of Marchione when he signed on for the current season of U.S. reality show Big Brother, but he has since come clean about his connection to Grande.

His tactics drew a number of negative comments from social media users, and one in particular caught the Problem hitmaker’s eye after the fan referred to Frankie as “that homo” in the comments section of her Instagram profile page.

Blasting the follower, the 21 year old reportedly wrote, “That ‘homo’ is the fiercest, most incredible, funniest, most intelligent, kind hearted and most LOVED person on the face of the planet!

“he also cleaned up his game and told the truth to everybody in the house WHICH by the way, nobody else on the show has done. so i don’t give a flying f**k if or when he comes home!!! he is incredible and i am SO proud!!!! oh and also ‘that homo’ gets more a** than you’ll ever get in your life. k miss thing ?” (Daily Star Online-August 13, 2014)

YouTube video of the donut and hate America incident

Jeff Duncan said in a Facebook post Saturday he was curious why companies TV networks such as NBC, Univision and ESPN, and other businesses such as record labels and concert venues have not had any response to the recent leak of a video showing the 22-year-old Grande licking donuts and saying, “I hate America.”

Meanwhile, those companies were “mighty quick to jump on the ‘bash Donald Trump’ bandwagon when he spoke about illegal aliens and ‘sanctuary city’ policies,” Duncan wrote.

When announcing his presidential candidacy, Trump said that Mexican migrants to the U.S. are drug traffickers and rapists, as well as “some … good people.” And, since, he has gone on to defend these statements, while losing millions of dollars in sponsorships and other business opportunities.

“This misguided young pop singer said that she hated America and hated Americans, while she proceeded to contaminate food for resale with the very tongue with which she uttered the hatred rant,” Duncan’s post continued. “The double-standards in this country are disgusting.”

Grande has apologized several times for the incident.” (billboard.com-7/13/2015)