“Dear Princely Person,” begins what might be one of the most expensive letters of all time.

In it, McCartney is asking Prince for a donation to build the Liverpool Institute for Performing Arts, which came to fruition in 1996. Although the letter does not have a date on it, it is assumed to have been sent in the mid 1980s. As NME points out, the letter refers to the Toxteth riots of 1981 has being “a few years ago.” As to whether Prince actually made the donation, we don’t know. RR Auctions, who sold the letter, noted that “the majority of [Prince’s] contributions were gifted anonymously.”

Here’s the handwritten version; you can read the whole letter below. 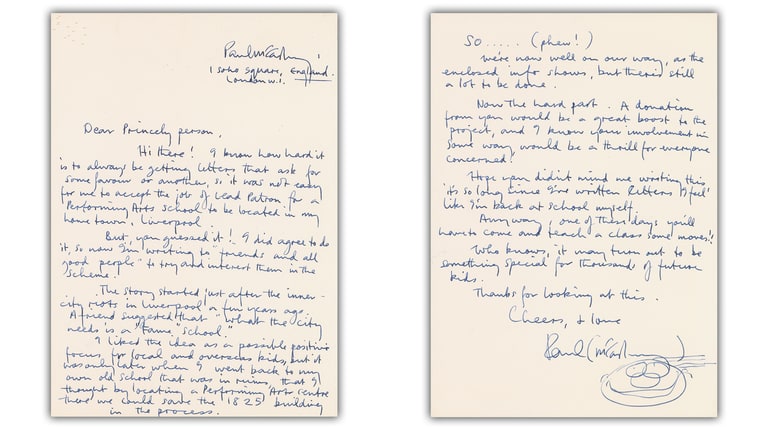 Hi there! I know how hard it is to always be getting letters that ask for some favour or another, so it was not easy for me to accept the job of Lead Patron for a Performing Arts School to be located in my home town, Liverpool. But, you guessed it! I did agree to do it, so now I’m writing to “friends and all good people” to try and interest them in the scheme. The story started just after the inner-city riots in Liverpool a few years ago. A friend suggested that “what the city needs is a “Fame” School.”

I liked the idea as a possible positive focus for local and overseas kids, but it was only later when I went back to my own old school that was in ruins, that I thought by locating a Performing Arts Centre there we could save the 1825 building in the process. So….. (phew!) We’re now well on our way, as the enclosed info shows, but there’s still a lot to be done. Now the hard part. A donation from you would be a great boost to the project, and I know your involvement in some way, would be a thrill for everyone concerned. Hope you didn’t mind me writing this, it’s so long since I’ve written letters I feel like I’m back at school myself.

Anyway, one of these days you’ll have to come and teach a class some moves!! Who knows, it may turn out to be something special for thousands of future kids. Thanks for looking at this.