Since perennial basketball powerhouse the Oklahoma City Thunder bowed out of the 2016 NBA Western Conference Finals to the hands of the greatest regular season team in history in the Golden State Warriors a few weeks ago, there has been mass debate and speculation on where the face of the Thunder and newfound free agent Kevin Durant would go. As one of the NBA’s top three players and the hottest free agent from this year’s crop, he controlled his destiny and each of the other 29 teams in the league tried to sway him to their city in one form or the other.

Hip-hop and basketball being forever intertwined, the rap community was following this decision as eagerly as anybody. Jay-Z and Roc Nation, whose sports agency division represents Durant, even tried their hardest to get the former MVP to the Brooklyn Nets, the team Jay-Z was once a minority owner of.

Now that Durant has finally made his decision though, there were differing reactions from almost every corner of the hip-hop world. 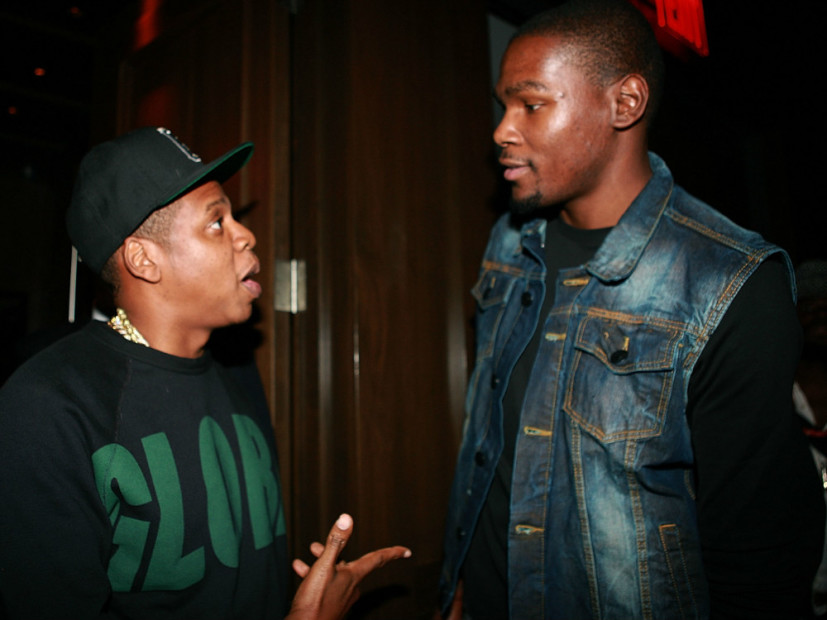 In a letter to The Players Tribune, Durant stated, “The primary mandate I had for myself in making this decision was to have it based on the potential for my growth as a player — as that has always steered me in the right direction, but I am also at a point in my life where it is of equal importance to find an opportunity that encourages my evolution as a man: moving out of my comfort zone to a new city and community which offers the greatest potential for my contribution and personal growth. With this in mind, I have decided that I am going to join the Golden State Warriors.”

Durant’s decision is bound to be both loved and loathed, the 2K fantasy bandwagon nature of common NBA fandom contrasted with the general public’s perception that joining a super team like this is a sign that Durant is shunning competition in favour of the easiest option. That the option he landed on was the Warriors, perhaps the Thunder’s hugest rivals of the last few years, is seen as an even bigger slight to his former team and fans. Some of those fans have gone as far as to torch their #35 jerseys, bringing back flashbacks of Lebron James and “The Decision” only a few years ago.

I wish Durant would have stuck around like the plastic this jersey was made out of pic.twitter.com/jhl7iLuy4e

Some in the hip-hop world were a combination of vaguely supportive and just in plain awe at just how unprecedented a team like the Warriors now possessing a superstar like Durant is.

Lol at people who are mad KD wanted to play for a better team. What part of the game is that? Let that man live.

NBA gone be interesting next year, I'm excited to see all the changes in motion.

Lol yeaaa @KDTrey5 you gave OKC all you had bro. Time for all superstars to pull a lebron and try to get a ring with a dreamteam why not

KD to the Warriors is an automatic slaughter

Some hip-hop stars were not quite as impressed:

Nigga pick the Warriors in 2k it's a fade!!!#cheatcode

But what is the point of signing Durant if he is still, as some believe, cursed by Lil B? After all, the Thunder’s sheer bad luck in letting their finals series with the Warriors slip from their grasp was near unprecedented. Isaiah Rashad had an idea:

Lil B himself replied by coming out in full support of Durant’s decision and lifting his longstanding curse over the superstar.

"The BasedGod" wants to speak,As life unravels and superstars make decisions that change lifes, welcome home KD the curse is lifted – Lil B

Could Lil B and Durant have struck a deal to get him over to Oakland with promise of lifting the curse and therefore a ring though? Producer Swiff D certainly thinks shenanigans are afoot:

KD joined the Warriors so he could get that damn curse lifted smh. "Basketball Decisions"

It was Vince Staples though, famous for weighing in with his very colourful opinions of NBA stars in the past, who took the cake and won the Internet, ridiculing his photo shoot and letter to the fans and taking the Kanye approach among other things:

Why you in the woods? I hope Lebron dunk on you for this letter. https://t.co/ijmDbDsT62

Hopefully KD find a barber in Oakland. The things men will do to break the Basedgod's curse. #shameful

I'm about to download KD mixtape just to delete it.

Durant is expected to sign a two year deal worth $54.3 million to join Stephen Curry, Klay Thompson and the 2015 NBA Champions, according to ESPN. They face the same challenges I have when trying to run a legit team on 2K though: salary caps. They’ll have to let a lot of their promising young bench players from their previous season’s historic team walk for nothing in order to play by the rules.

With so many players moving teams every season, Kobe gone and possibly even Tim Duncan retiring, there are less and less players who are willing to rock one jersey for their whole career. I thought Durant might have been one. I guess not.