If you’ve been reading Howl & Echoes throughout the past year or so, you will no doubt be aware that we work really hard to champion local hip-hop. Australian artists can rival any of those from the USA and beyond, and the best way to discover this, is to go and check out exciting new artists from our own backyard.

Fire Night has already built itself a steady reputation as a great night out, and for good reason, too. Brisbane duo Velcro Raptor dropped their debut album last year, the excellent Thick Shake, featuring Sahara Beck and The Middle East‘s Rohin Jones, and are now gearing up to launch their brand new single, Wish I Had You at Fire Night!

Meanwhile, Swilo has warmed stages for some of the hip-hop’s biggest names, like B.o.B, Lupe Fiasco and Nelly, Tides is something of a veteran, with more than four years under belt in the local scene, and Hedron Collective will be showing off their debut EP, released last year.

We couldn’t be prouder to see more and more excellent hip-hop artists gaining attention from the Australian community, and an ongoing event like Fire Night is a crucial part of that growth.

Tickets are $10 on the night, and the event kicks off from 7:30 pm on July 29, 2016 at Brisbane’s Woolly Mammoth. Make sure to keep an eye on the official Facebook event for details and updates. 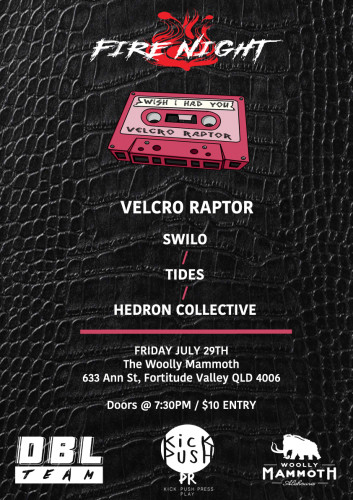