Last week, Vic Mensa dropped a seven track mixtape called There’s Alot Going On. I expected it to be good, but I didn’t expect to hit me as hard as it did. The release tackles a full range of issues from alcohol dependancy to police brutality, to the water crisis in Flint, Michigan and beyond.

The title track – the mixtape’s closing number – is the most powerful. It very specifically details Mensa’s journey so far, including a relationship turning violent, of severe depression, drug abuse, a near suicide attempt and much more.

It follows his story chronologically, using single releases and dates, like his birthday (which is today), to provide literal context for the chain of events. Most importantly it discusses the need to continue on your path, to have faith in yourself, and to keep going. The title says it all: there’s a lot going on.

The new video for the track is simple and bare, featuring nothing more than Vic rapping alone in front of a grey backdrop. At various points throughout, photos with a target printed on them (much like the cover artwork) float past referencing story points in the song – his first meeting with Jay Z, a violent fight with his girlfriend Natalie, his band Kids These Days, meeting Mr Hudson and so on. He also acts out a few of the plot points – miming a noose around his neck, and a gun to his head, while describing his near suicide.

It is perfect for the nature of this song. Considering the exceptionally revealing, intimate detail of this song, the most powerful way to portray it visually is to just watch Mensa pour his heart out on screen.

Mensa has also written a letter posted to his website, detailing the story behind the mixtape. 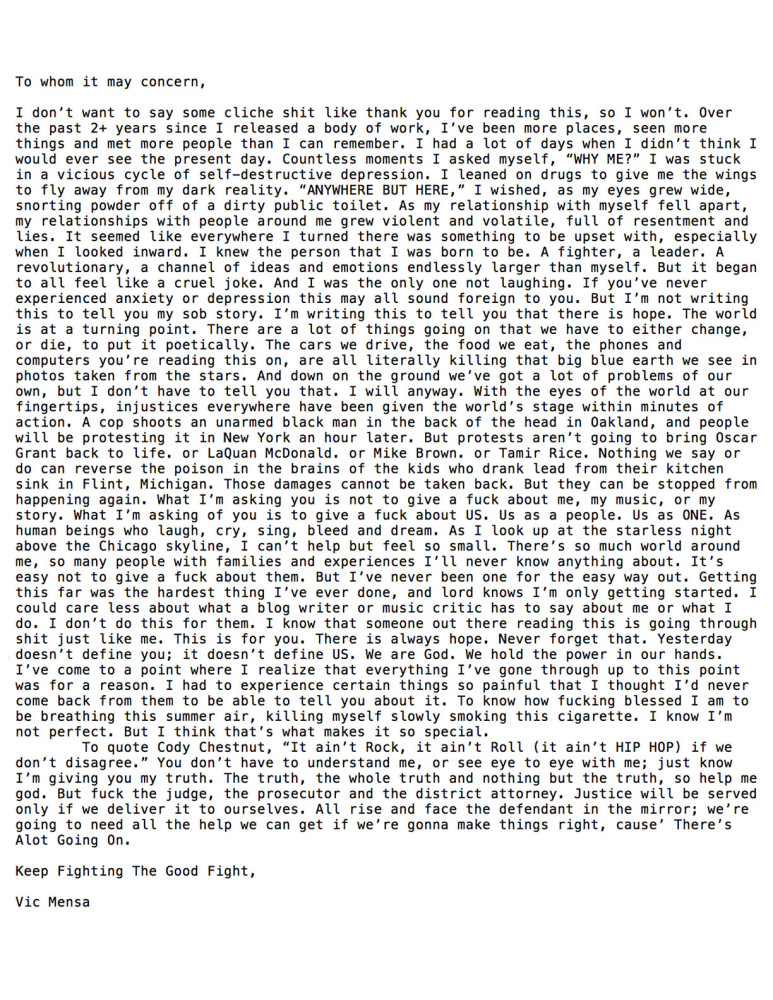 I don’t say this lightly, but to me There’s Alot Going On is one of the most important releases since To Pimp A Butterfly. I thoroughly implore everyone to check it out – it’s now available across all major streaming services, so you have no real excuse.