This morning, Vic Mensa dropped some knowledge on us all via a Live Facebook Q&A in the wake of the release of his mixtape There’s Alot Going On. You can watch the whole thing here.

Here’s some surprising (and not-so-surprising) things we learnt about the Chicago rapper:

He doesn’t smoke up anymore.

“… I stopped smoking because I like being on my square. I just didn’t really feel like I wanted to be taking myself out of a state of mental clarity anymore… Prior to stopping smoking, like six months ago, I’d smoked for over half of my life. Right now it feels like everything I’m trying to do, and the things I’m trying to accomplish, and the challenges I’m up against… these are steep, steep hills and walls and mountains. And it’s shit that I have to be physically fit and mentally acute to be able to make it over.”

He’s on the side of love.

His latest track Free Love was fuelled both by the horrific mass shooting in Orlando as well as by one of Mensa’s family members coming out to him as identifying as queer, and the personal growth that inspired in him.

He & Papi Beatz are basically #squadgoals

Has a matching tattoo with Papi Beatz, written in each others handwriting – it says ‘Life Is So Crazy’.

He’s pretty done with answering questions about that beef with Chance The Rapper.

“Me and Chance is cool so if y’all wanna stop asking that question, then you could do that.”

His confidence can’t be beat.

Catching his reflection during the session, Vic delightedly remarked that he was looking “fresh”. Need further evidence he’s walking tall? In response to a fan question he told them: “My favourite rapper is, by far, me.”

He’s on Team Hillary. Or, more to the point, he’s NOT on Team Trump.

But he loves Mighty Ducks.

He is not a Spike Lee fan.

Vic recently appeared, to much criticism, in Spike Lee’s controversial flick about Chicago, Chi-Raq. The movie copped a LOT of flack for misrepresenting the Chicago scene. And he’s not happy with the end product, or the way his involvement came to pass.

“Spike Lee came to me like ‘I want you to be in this, and I’ll take your input on how we can make the script, the slang be true to Chicago’ and asked me who to get for the music. So I’m like, okay, I’ll link them up… After that, I was on the road and Spike Lee wasn’t picking up the phone… I was at no table reads, nothing, because he wasn’t picking up the phone once I gave him my resources.

So I showed up, and the shoot was goofy as fuck, it was terrible, I could tell… I left at the end of that first day, didn’t sign none of the paperwork, and just dipped. I called Spike Lee and I’m like, ‘You gotta take me out. I need to be out.’ And I just wasn’t able to get out because showing up on set was some type of legal whatever. It was like consent, in a way – being on camera consensually. So that’s why I was in Chi-raq, because I was trying to make it better, but Spike Lee is a fuckboy and it didn’t work out.”

His go-to jam is Frontin’ by Pharell.

Did we mention he really, really doesn’t like Donald Trump?

“I agree that Hillary Clinton’s past hasn’t always been things that I agree with. She definitely has her shadows to her message. But that being said, in the case of Donald Trump you have a man who is literally spreading specific hate about Muslims. Saying that Muslims shouldn’t be allowed in the country, saying that Mexicans are ‘by large rapists and criminals, and some I assume are good people’. Someone who has white supremacists across the board championing him as their candidate. Donald Trump got on TV and acted like he didn’t know who the KKK was! … It took him DAYS to even denounce the Ku Klux Klan. You have somebody here who’s really, really really in a position to make life dangerous for all of us.”

The Clash is his biggest fashion inspiration.

We can see it. 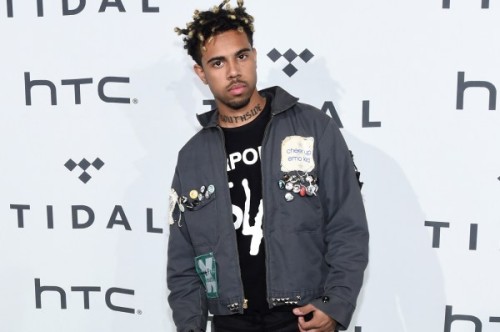 Don’t expect to see rappers featuring on his upcoming album.

“This dude with a ridiculous name… Mags Magnificient Mckelly Enzumelo – yo, if I pronounced that right – he wants to know about features on the album. Yeah, you right bro, I didn’t put a lot of features on the EP. I don’t really do features like that because most songs that I write are just very unique to me… they don’t really, in my mind, lend themselves to other people. With that said, I do have some features on the album but not really rappers.”

He’s had it up to here with gun nuts.

“…These fucking Republicans won’t even admit that AR-15s being on the street are a problem. They say the AR-15, this black Call Of Duty-ass gun, is a good hunting weapon. And American people that resonate with them feed off of these sensationalist headlines saying ‘they’re trying to take away our guns and our Second Amendment Rights’… It’s not because they wanna protect your rights. It’s because they’re getting money from gun lobbies. They’re getting money from those groups. And they’re making us all be in the line of fire by doing that.”

Wanna be a muso? Vic Mensa says you gotta do you.

“The same advice I always give for upcoming musicians is to just be unapologetically yourself… Because it’s easy to get influenced by the things going on around you. But what I’ve found to be the most successful for me is just being me, and figuring out how I can be me in the best way.”