Milan Fashion Week is in full swing and already we have seen Gucci bum-bags, Fenti bucket hats and gold medallions, all styles we could see rappers from Charlie Threads to Earl Sweatshirt sporting. But what are the rappers wearing these days? Would they be interested in Fenti hats?

I always consider Adidas the first hip-hop clothing range; going all the way back to when hip-hop royalty Run DMC signed a million dollar deal with the company. They were the first non-athletes to obtain a sneaker deal and potentially pave the way for others in the hip-hop game to either start their own clothing ranges or get similar sponsorships.

Since then, it almost seems as if almost every rapper has had their own clothing line. So does Jay-Z only wear Rocawear? And Tyga only wear Last Kings? Or is everyone taking the Biggie Smalls route and still rocking Versace everything?

I have never worn anything that has been featured in a fashion show, one quick look at my beaten up brown leather jacket will prove I have no diversity in that department, but I have worn my fair share of clothes from the world of hip-hop fashion (although it has been some time since I rocked a fresh Sean John tracksuit with my Phat Farm polo to a basketball game). Hip-hop and fashion are so intertwined now that some of the biggest names with their own clothing lines even have their own fashion shows (well maybe just Kanye’s and his Yeezy line of couture.

With that in mind, I decided to take a look at what rappers are really wearing, or what they think we should be wearing. Here are the ten best hip-hop clothing lines of all time. In no particular order: 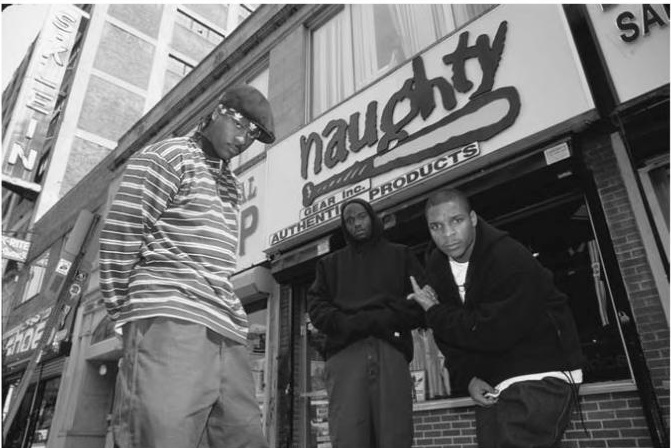 Naughty Gear was one of the very first rapper clothing lines, put out by the boys from Naughty By Nature. With an awesome group name like that, you’re almost destined to sell at least a million t-shirts just by putting your own logo on it. They did a lot more than sell a few shirts too, they had their own clothing shop in Newark, New Jersey back in the day which also sold other street brands.

My affinity for everything Wu-Tang Clan certainly didn’t stop at their music. I always wanted to be a member of the Clan and did my best to emulate their dress style. It was pretty easy because Oli “Power” Grant, the Clan’s executive producer, had been putting out Wu Wear since the early ‘90s. I still have one Wu Wear jacket left, although my housemate thinks it’s her ‘dog-walking jacket’, almost criminally having no idea of the rarity of such a garment.

Some of the Wu-Tang members even toyed with the idea of their own Wu Wear side branches. “I’m going to bring out Dirty Wear,” Ol’ Dirty Bastard once said. “A set of ready-worn clothes: ‘Dirty Wear, for the girl who likes to wear her panties three days in a row.’” (your move, ladies) 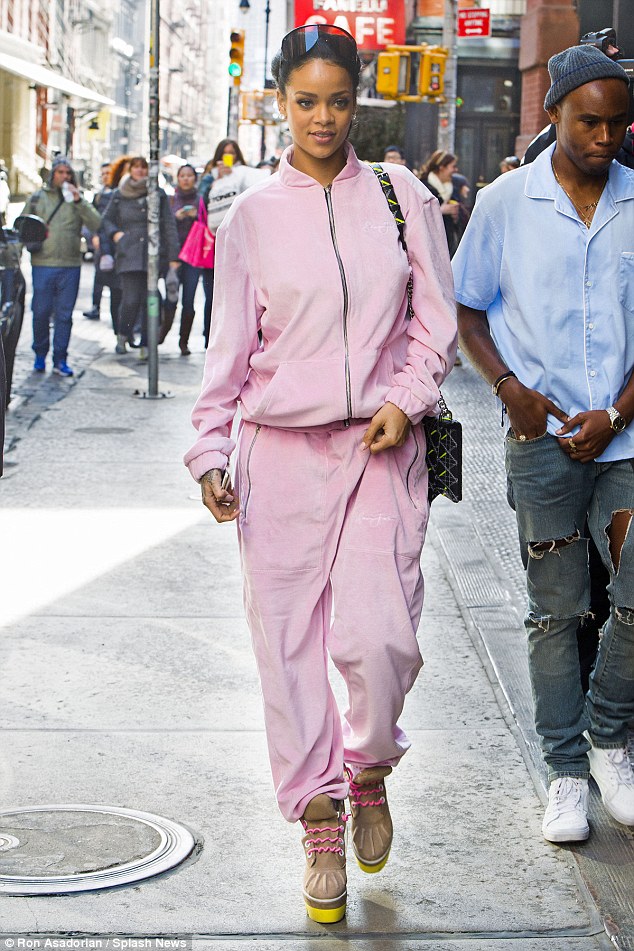 Wearing warm-up tracksuits from Sean John on the outdoor basketball courts in the early 2000s was the epitome of style and ‘cash’. Among all the Russell Athletics, Adidas, Nike, tracksuits rolling up to the courts, I always felt way fresher and got more comments on my sand-coloured velour tracksuit. However, it seemed as the brand gained popularity, or Puff Daddy got too snobby, the price and the style of the clothing skyrocketed up and over mere teenagers shooting hoops. I never replaced that tracksuit, and have never felt as fresh. 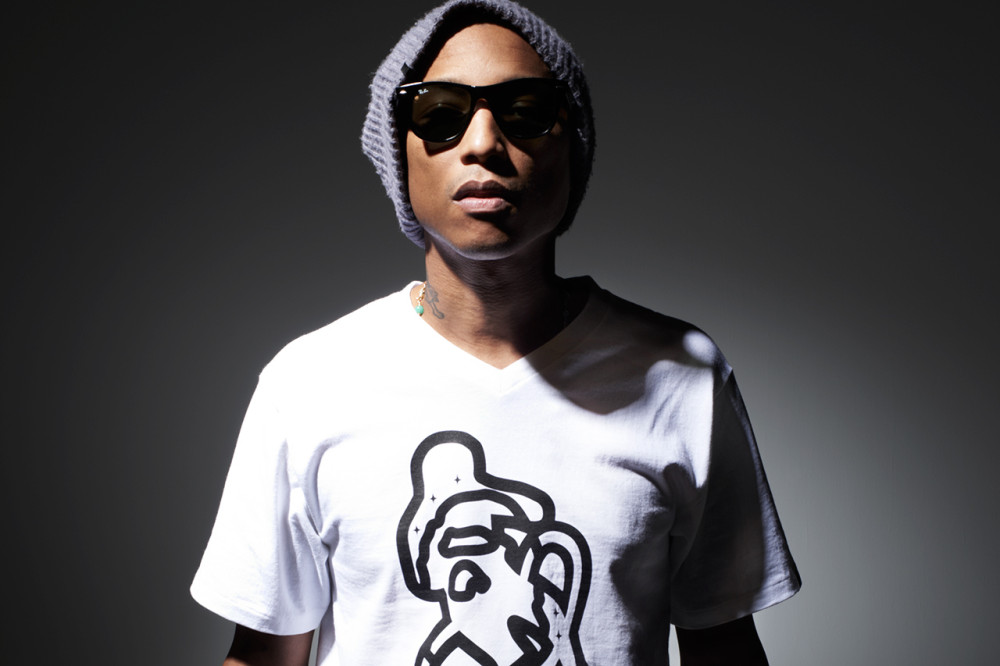 In 2005 Pharrell Williams was named Best Dressed Man by Esquire, coincidentally or not the same year he launched Billionaire Boys Club. Best Dressed Man is a hell of a resume for someone looking to start their clothing line, but Pharrell didn’t just use this to launch and line and have his name attached to it for a quick pay check. He is one of the most dedicated CEOs in the game and he has been able to keep Billionaire Boys Club relevant with current street trends. 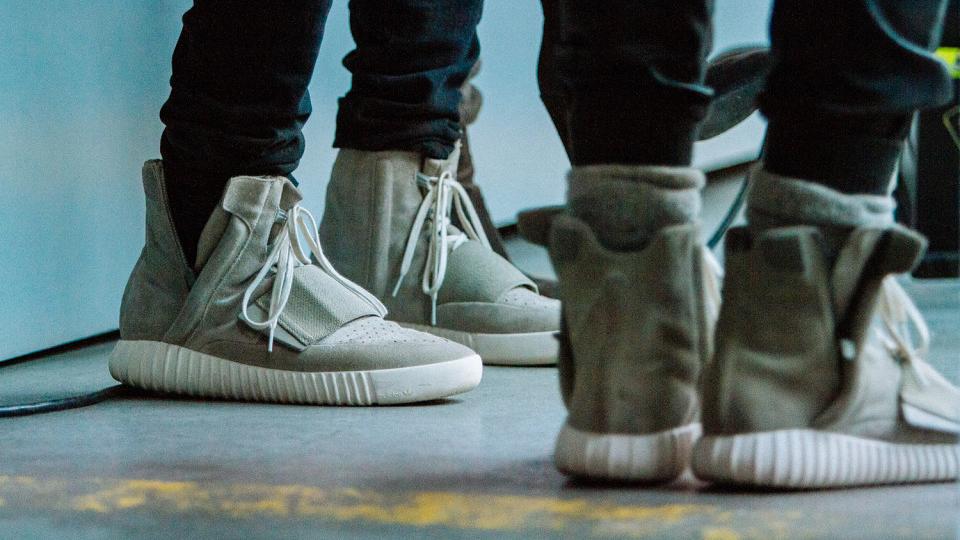 I have to put Kanye on this list, if not for the simple fact that I just don’t get it. The shoes look like socks, and his fashion show looks like it was from a runway in Tatooine. Whether or not Kanye is responsible for men being able to wear skinny jeans or not though, I fail to understand the hype behind this line. I know it sounds like I am being negative but perhaps being unable to afford soled socks might be the reason.

Many people question the frankly ludicrous price of Yeezy shoes, all that money for something that would barely even be eye-catching without his name attached to it. You could possibly chalk it up to graffiti culture, something also intertwined with hip-hop since its beginnings, is responsible for ‘basic’ athletic shoes coming into style, Kanye picking up on that ‘basic’ element and running all the way to the bank with it.. 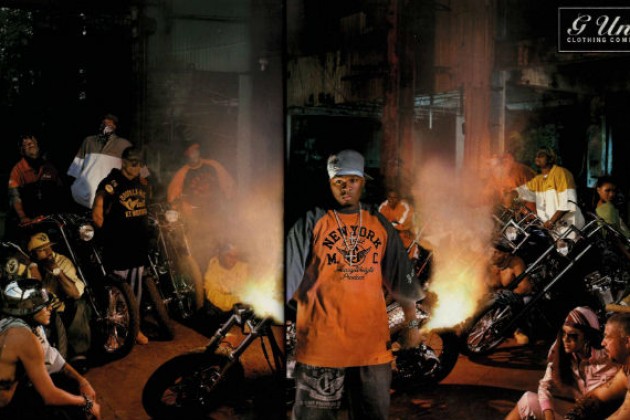 An absolute crowd favourite on free dress days at school was anything and everything with G-Unit on it. The brand first became a force to be reckoned with when a top-of-his-game 50 Cent teamed up with Marc Ecko, founder of Ecko Unlimited, to create some decent clothing.

The down fall of this range was definitely the G-Unit part, Ecko was already one of the better street wear brands out there but the G-Unit range always felt like rip off Ecko gear. I’m not exactly sure about how well the brand did here in Australia as it was always one of the more rackable clothing ranges out there. It seemed like everyone who wore G-Unit stole it from Myers Chadstone. 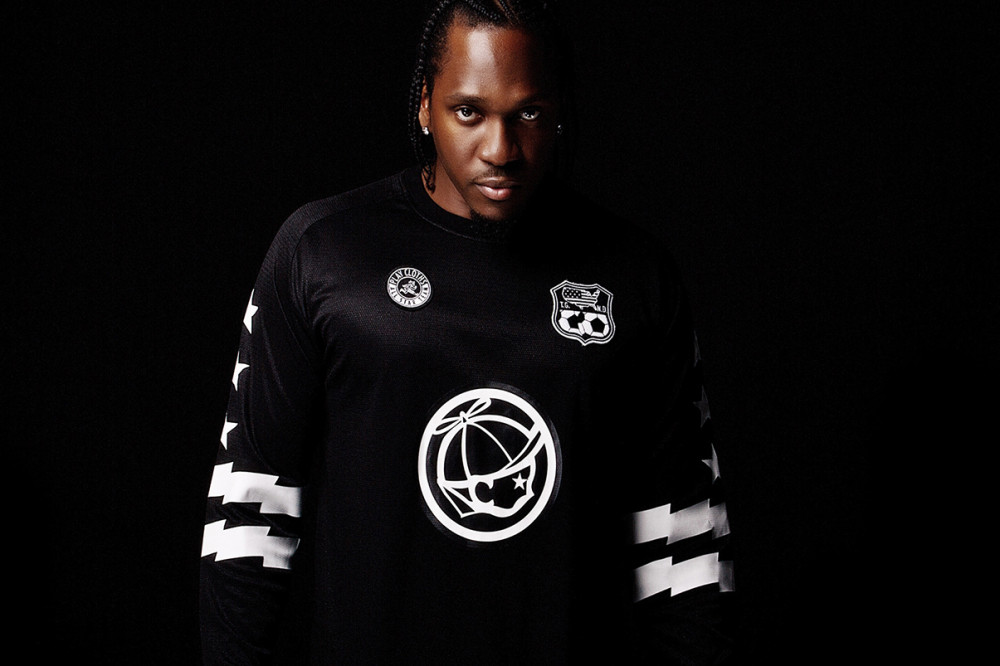 The inspiration for Pusha T’s Play Cloths were the clothes that kids are allowed to wear when they get home from school and were granted permission to play outside, especially with the brand’s bright colours on black and white. Much of the clothing I owned that has long been eaten away by moths had this feel to them.

Pusha T probably has a lot on his plate now that he is president of G.O.O.D. Music, but I imagine his brand will continue to grow along with his influence in G.O.O.D. Music. 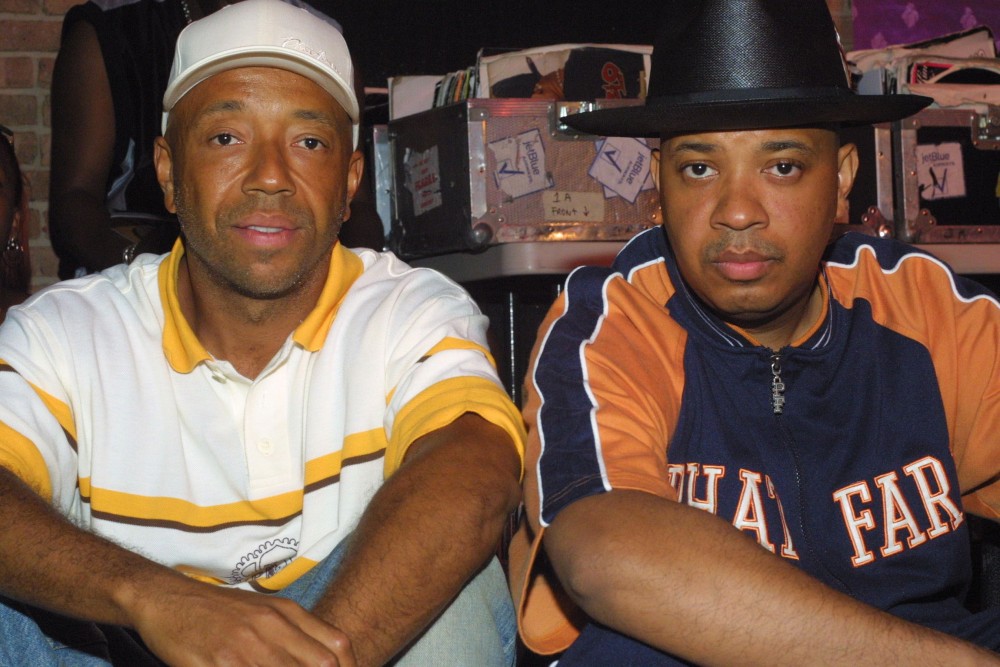 While Russell Simmons isn’t a ‘rapper’, he is very much responsible for a lot of hip-hop music. He is the co-founder of Def Jam Records and his brother is Reverend Run of the aforementioned Run DMC. I had a few Phat Farm polos back in the day, but what I really wanted my whole life was a Phat Farm bomber jacket. I had forgotten this dream, but it has been reunited with my hip pocket and I will hopefully have one by the time this article is published. ‘Nuff said. 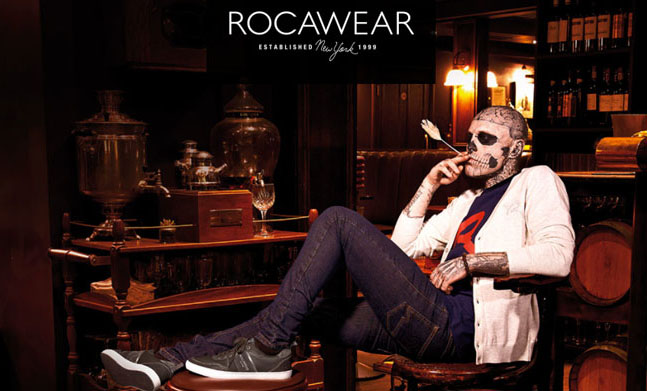 Jay-Z and Roc-A-Fella practically owned every aspect of the game in the early 2000s, so it was only natural that he and co-conspirator Dame Dash should have their own clothing range to try and conquer the fashion world as well. Much of it might look positively outlandish by today’s standards (Rocawear selling like hotcakes in a time when baggy was always better) but so many kids I played basketball with ran Rocawear apparel, especially the jeans. I wasn’t much of a jeans man back then so I never copped a pair.

Rocawear has fallen off a little since its halcyon days, but they teamed with Pharrell’s Billionaire Boys Club back in 2011 and continue to be a multi-million dollar venture even today. 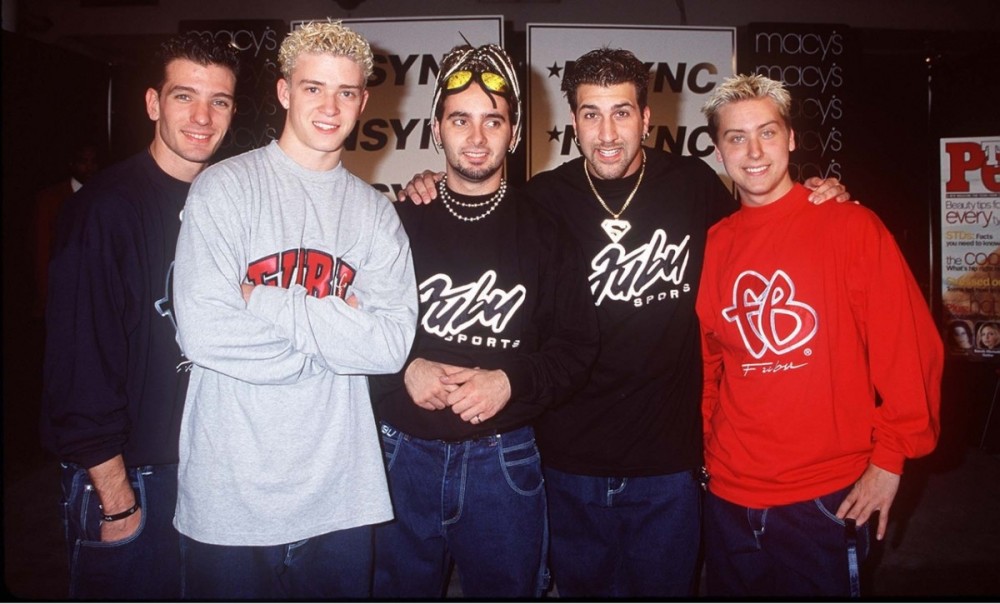 “For Us By Us” if you were wondering. I was far too young for this brand, it had come and gone before I even knew of the concept of pocket money, but it was one of the hugest selling hip-hop brands for a long, long time. FUBU was hounded by Daymond John, J. Alexander Martin, Keith Perrin and Carlton Brown who had a line of hats made in John’s house in Queens. According to CNBC, “During his off hours, John would hit music video sets and try to coax rappers to wear FUBU apparel in the shoot.”

Of those rappers donning the brand, Brand Nubian wore FUBU in one of their videos, Ol’ Dirty Bastard famously wore it in a Mariah Carey video, Busta Rhymes wore it on one of his videos too, and LL Cool J wore FUBU in the Hey Lover video. All this exposure made FUBU one of the most sought after hip-hop brands of the period. LL eventually became the ambassador for FUBU and with the help of John was even able to wear a FUBU hat during a Gap commercial – unbeknownst to the executives at Gap.

These are just some of history’s best rapper clothing lines, and while the early 2000s was its zenith, there are so many more. With artists now all but forced to think outside the box and beyond selling just their music in the digital era, we will probably continue to see hip-hop clothing on the shelves (or ripped off at Vic Markets and the like).

Maybe next year in Milan we might finally see a rapper-designed outfit at Fashion Week. Surely Kanye’s not the only one who can crack the high fashion market?