Well this seems glaringly familiar. Anyone who has read Howl & Echoes since our inception is no doubt well aware of our ongoing battle against photography theft without permission nor credit. While our own recent experiences with A$AP Rocky and Danny Brown have resulted in little more than causing a bit of a stir, one Dutch photographer is suing Spotify for the very same issue. Dana Lixenberg, who has shot portraits of everyone from Prince to Tupac and Whitney Houston, is now under the same strife, with Spotify’s blatant use of artist images, in particular her portrait of acclaimed New York rapper, Notorious B.I.G.

“Not content to solely rip off the musicians on whose backs Spotify has built an 8 billion dollar company, Spotify has expanded its efforts to also include ripping off photographers,” she stated in a complaint filed in the California federal court.

She goes on to add that “the elements, composition, colours, arrangement, subject, lighting, angle, and overall appearance of the images are identical or at least substantially similar”, but take a look for yourself, it’s obvious these images of Notorious BIG are exactly the same. 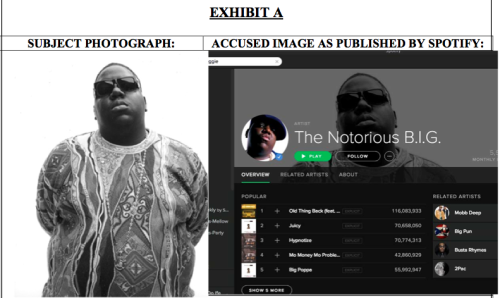 She’s demanding profits, statutory damages, costs and attorneys’ fees for the image which as steep as it may seem, certainly would be feasible against a company as large as Spotify.

What this means in terms of copyright though, is that there is actually a discussion going on about what is right and wrong, what is stealing and what is fair use. A court case of this scale is going to draw a lot of attention to Spotify, and all media companies, and their practices when it comes to crediting, acknowledging and paying photographers and creatives. There is no way this can’t be seen as the same image, so the awareness that this will bring will definitely go far in determining where creatives really stand.