I went to a Camp Cope show last weekend.

It was a great set – the Melbourne trio absolutely killed it. Lead singer Georgia Maq’s passion shone through each and every track, and the enthusiastic crowd loved every minute of it. Especially Done, which is currently in high rotation on triple j (following their self-titled LP scoring Feature Album)… and their song Jet Fuel Can’t Melt Steel Beams.

It’s a funny title, based off the meme-ification of 9/11 conspiracy theories. But Jet Fuel actually deals with pretty serious subject matter: hyper-masculinity, misogyny, and the way that women are silenced and blamed in instances of sexual assault. It’s a great tune, and I’m all for people calling out unacceptable behaviour and social institutions through their music.

Because I anticipate that there will be a certain knee-jerk reaction to this article, let me pause here to say something. I do not believe all men act in unacceptable or misogynistic ways, inside or outside the context of gigs. I am also aware that some women are, sadly, very capable of internalised misogyny. I also know that men can and have suffered from violence at gigs, and this is completely abhorrent too.

But I also know this: when Camp Cope played Jet Fuel, there was a large group of male individuals whose enthusiasm overstepped safe and acceptable behaviour. They jumped around aggressively. They elbowed their way past other female (and male) punters. More than a few fans (including myself) felt it necessary to move from the front of the audience to the back, where it was safe but as we all know, nowhere near as fun. 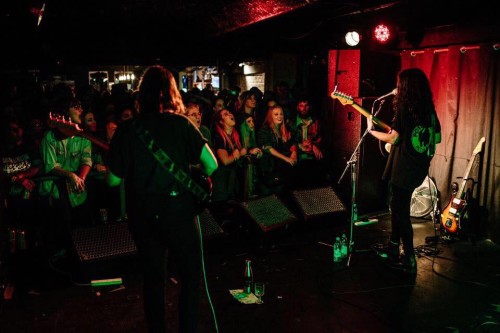 The irony of the situation didn’t escape the band. Maq called out the behaviour onstage, instructing the men to “chill out” and telling them it “wasn’t safe,” to many cheers and whoops from the crowd. After the show, I chatted to the trio, and drummer Sarah “Thomo” Thompson gave me the following statement:

“…that sort of behaviour isn’t going to be tolerated at our shows and we encourage people to let Georgia know if anything is going on so she can call them out on it. [That] night the guys pushing past girls while singing all the words [to] Jet Fuel was the most ridiculous and ironic thing I’ve ever seen. We are about making girls feel safe to be in the front row of our shows and want people to always feel comfortable telling us if things aren’t safe in the crowd.”

Thankfully, Camp Cope are far from the only band who feel strongly enough about this issue to call it out. Brooklyn pop-punk band Chumped made a statement last year reminding their fans that “Inappropriately touching someone against their will or using physical/sexual force to intimidate someone of ANY gender identification is molestation and it will not EVER be tolerated at our shows,” a sentiment echoed by The Smith Street Band‘s Wil Wagner. Numerous other artists have made a point of decrying sexism within the greater music industry too, such as Best Coast’s Bethany Cosentino, Killer Mike, Hinds, and many more.

While it’s fantastic that many musicians are standing up to this kind of behaviour, it’s clear that some people still aren’t getting the message. How else do you explain a dude elbowing a girl in the stomach in his rush to sing along to lyrics like “Hearing cat calls from a construction site, they’ll say take it as a compliment, they’re only being nice”?