It makes sense that there are countless hip-hop murals around the globe that depict musicians who have left us.  Hip-hop and street art have always been intertwined. They riff on each other, feed off each other. What better way to commemorate an artist’s legacy than through the intrinsically anti-establishment art form?

It’s just come to light that A Tribe Called Quest are set to be honoured with a mural of their own, in memory of the incomparable Phife Dawg (RIP). We take a look at this & a few other hip hop mural memorials from NYC & our own backyard… 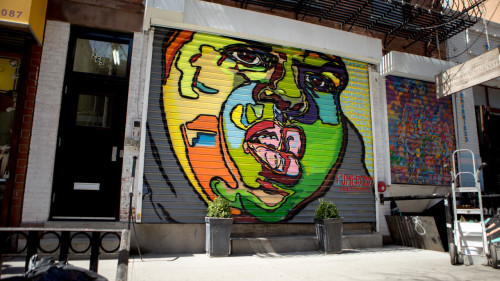 Let’s start with the obvious. There are so many Biggie murals in New York that it’s almost impossible to keep track – but it’s with good reason. Biggie is such an influential, ever-present figure not only in music as a whole, but to New York specifically, that he’s become somewhat of a “patron saint” of street art, as noted by the Observer’s Ryan Steadman. Murals exist in Bushwick, Bed-Stuy, Fort Greene & Brooklyn – and by the time you’ve finished reading this, a few more have probably cropped up too.

I came across this killer MCA tribute mural a few years ago at Bondi Beach with my dad. I’ll be playing some Beastie Boys at work this weekend!

This mural, at Sydney’s Bondi Beach, honours the late great Adam “MCA” Yauch, who passed away of cancer in 2012. It’s a fittingly vivid tribute, in an appropriately (read: INSANELY) busy thoroughfare for passers-by to enjoy. The co-founder of The Beastie Boys was a towering talent who helped give us tracks like No Sleep Till Brooklyn and Shake Your Rump – but he was also an outspoken activist and a filmmaker. Yauch was heavily involved in the Free Tibet movement, his production company released the iconic Banksy film Exit Through The Gift Shop, and he directed many of The Beastie Boys’ music videos under the pseudonym “Nathaniel Hornblower”. 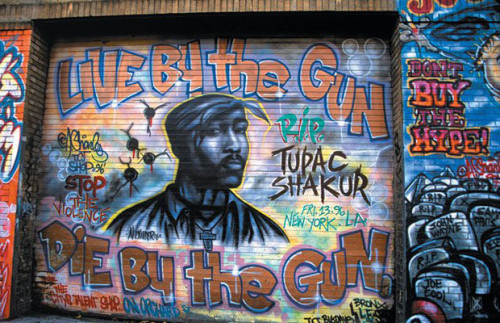 How could we mention Biggie and not Tupac? This particularly iconic mural was said to have been situated on East Houston Street, on New York’s Lower East Side, but sadly it’s since been painted over. Renowned street artist, Andre ‘Baby Man’ Charles, completed this iconic piece of work in 1996, and has since said he hopes to show it on canvas someday. In the meantime, there’s no dearth of Tupac murals either – there’s even one of him & Biggie on the side of the Telstra Business Centre in Sutherland Shire NSW, of all places. 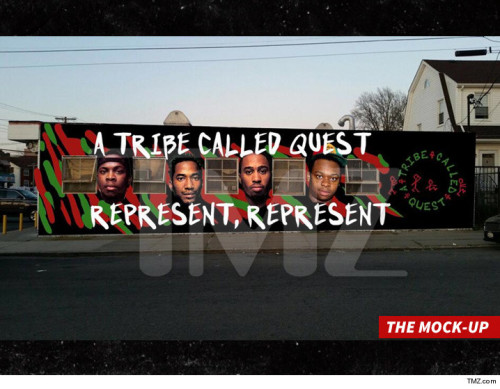 A Tribe Called Quest made the Nu-Clear Cleaner dry cleaner’s building in Queens, NYC famous in their video for Check The Rhime, and now their mark on the place is about to made even more tangible. The mural will commemorate the collective’s insanely significant body of work, as well as paying respects to Phife Dawg. The “Five Foot Assassin” died in March this year due to complications of diabetes, devastating the wider musical community. Designer/street artist Vince Ballentine has created a mock-up of the mural, which will riff visually on ATCQ’s Midnight Marauders album artwork – an album on which Phife Dawg referred to himself as being a “funky diabetic”. Fans are commissioning the mural; and are also petitioning for the street it will be painted on to be renamed A Tribe Called Quest Boulevard.