Electro-weirdos (and we mean that in a very positive way) Glass Animals have today announced details of their second album How To Be A Human Being, to be released on 26th August via Wolf Tone/Caroline Australia.

Looks like the four-piece have shaken up their #aesthetic a bit, because would you take a look at this album cover? 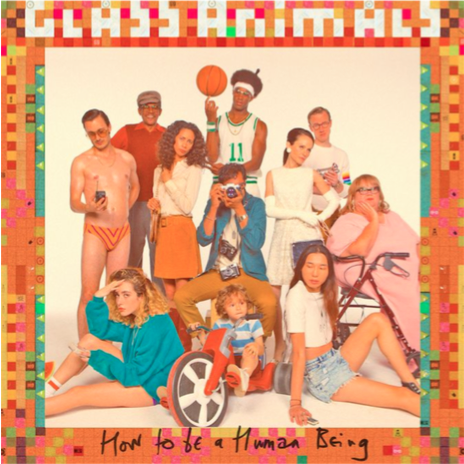 Artwork for Glass Animals – How To Be A Human Being

It’s all very After-School Special/The Babysitter’s Club, but honestly we kinda dig it.

How To Be A Human Being is a concept album of sorts, drawing inspiration from the random recordings frontman Dave Bayley took while on the road and speaking with strangers. “I try to sneakily record people,” Bayley said of the writing process, “And I have hours and hours of these amazing rants from taxi drivers, strange people we met outside of shows, people at parties. People say the strangest shit when they don’t think they’re ever gonna see you again.”

Sure, it sounds odd and just the tiniest little bit creepy, but isn’t that human nature? It sounds (and looks) as though the album is going to be a semi-fictional multi-character study, and that sounds fascinating as HELL, creepy or not. First single Life Itself has already marked out a turning point for the Glass Animals sound – ditching watery synths for South East Asian-inspired percussion. The newly-released video for the track which follows the soap-opera-esque story of one of Bayley’s ill-fated characters, shot in gorgeous sepia and pastel tones.

Check out the album track list here, and Glass Animals’ tour dates below.

How To Be A Human Being tracklisting: