As the saying goes, it’s who you know, not what you know.

That statement certainly ran true for the neighbours of Radiohead frontman Thom Yorke, with reports emerging last week via Reddit that the singer had appeared at a next door garden party to provide some light entertainment. 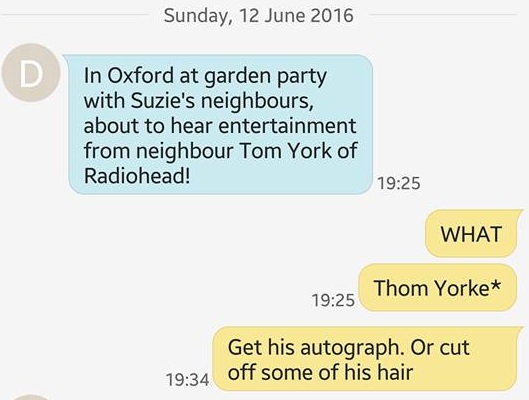 Naturally, the internet was equal parts fanatically excited and extremely skeptical, although one photo was posted with the texts.

This is the Thom Yorke, famous for shying away from public adoration and telling his fans to “fuck off” in the streets.

However, footage has now surfaced from the event, providing us all with proof that Yorke did indeed perform for a bunch of strangers in a backyard.

In the grainy video, a relaxed Yorke can be seen having some casual banter with the audience before busting out an acoustic version of Reckoner. Watch below.

According to NME, Yorke went on to perform Desert Island Disk, No Surprises, Street Spirit and I Might Be Wrong in a 30 minute set that covered a surprising amount of ground in the band’s catalogue.

The garden party set is just another surprise to add to the list of recent Radiohead activity, with all manner of wild things going down on the bands latest tour, including Johnny Greenwood making a mistake onstage and the band busting out Creep for the first time in seven years.

We’ve been buzzing about Radiohead these past few months, after they dropped their long-awaited ninth LP A Moon Shaped Pool at the beginning of last month. You can read our full review here.

Radiohead are also delivering a special streaming event to record stores across the world tomorrow, with some special prizes in store for a few lucky fans. Check all the details here.