This week, Chance the Rapper, real name Chancelor Bennett, took part in an hour long lecture at the University of Chicago Institute of Politics – just weeks after the release of his new mixtape, Coloring Book. On his home turf in the city, he joined Bakari Kitwana, author of The Hip-Hop Generation, to discuss his upbringing, political activism and the music industry.

Touching on his childhood, one which was heavily influenced by religion, he attributed much of himself to his church upbringing. With a shoutout to his home church, he described how his great grandmother brought together less conservative churchgoers of her time. He first learned about music at church, which went on to shape his values and who he is today. He also attributed his entry into making music to his mentor Mic Hawkins, who he met at a community space in Chicago which gave young people the opportunity to learn how to make and producer music. 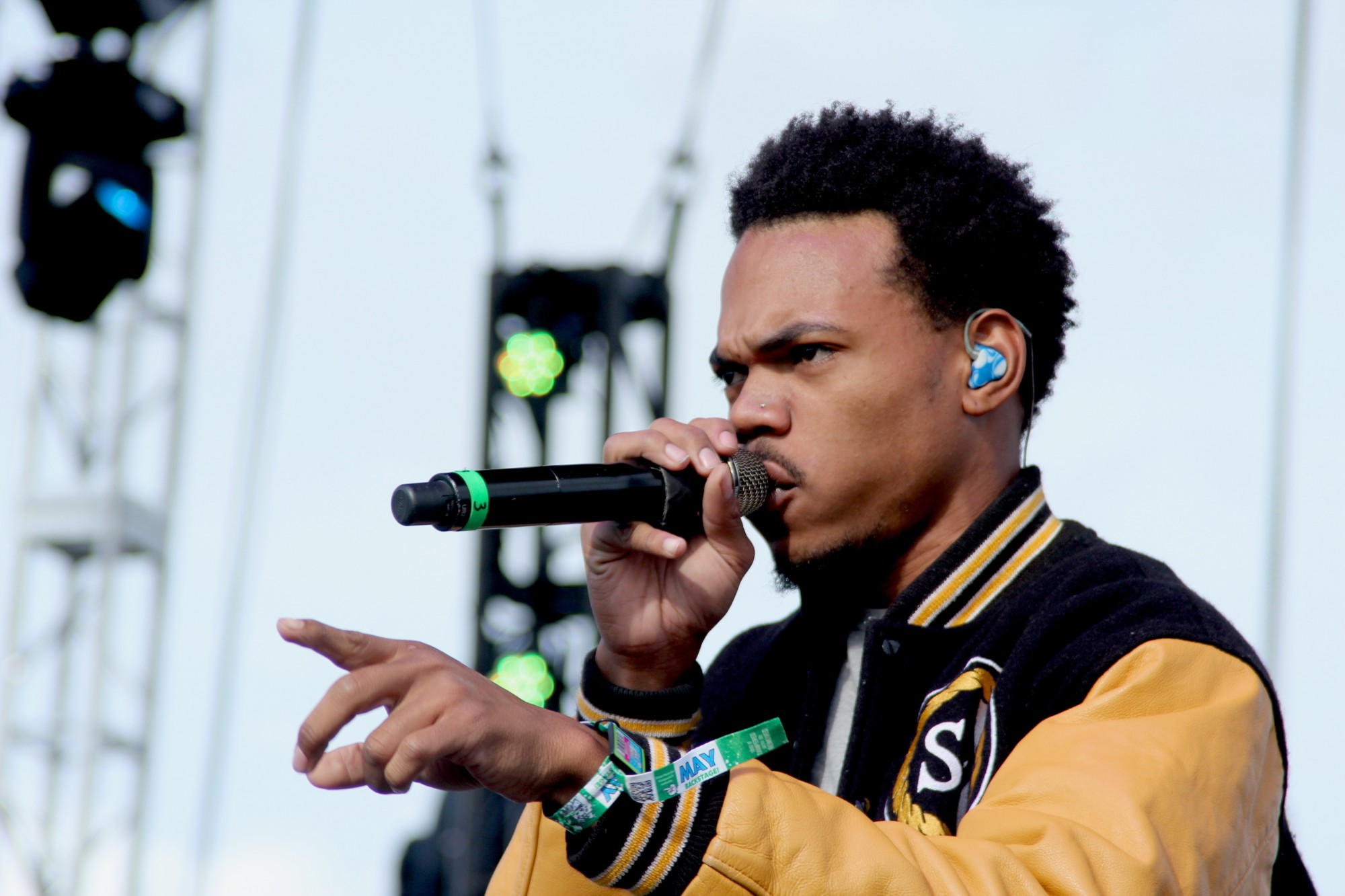 Talking about Chicago hip-hop, Kitwana mentioned Chance the Rapper as the face of the scene, to which Chance quipped, “I’m so funny looking, that’s a crazy face for hip-hop.” Commenting on his Chicago crew, Savemoney, which Kitwana described as confusing for a number of people as they shun any label affiliation, Chance told the audience “Believe it or not, most of the time rap crews are devised by labels… like a party pack.” The discussion around the labels and the music business lead to some interesting point from Chance, including a revelation that he had nearly signed a contract with Sony Music in 2012.

Chance’s success as a rapper without the support of a major label is well known, but he described how a number of labels were chasing him after the release of his first mixtape 10 Day. He recalls a meeting with current Epic Records president Sylvia Rhone; “I remember I had a label meeting with this woman who I really respect and don’t want to paint her as a bad person at all. A woman named Sylvia Rhone, who’s at Sony Music… That was the one deal I was going to take. I don’t really talk about it enough, but there is this deal that I was going to take in 2012 after my first mixtape, 10 Day. I was getting courted by labels and I remember I went to this meeting. I got flown out to New York.”

He goes on to describe how the experience was like something out of The Cheatah Girls as he set out to prove himself to the industry faces; ““In real life, ni**as really do go to label meetings and start rapping in a room full of people in suits to prove that they need that deal. And it’s an ugly thing to think about. I had that moment, though. I was in a meeting with Sylvia Rhone and LA Reid, and they asked me to play some songs on the speakers… I’m playing it for them and they’re jammin’ and they’re like ‘do your dance’ and I’m in that bitch like ‘ahh yeah’ playing ‘Chain Smoker’ singing the words louder than the speaker and shit.”

Ultimately though, he unhesitatingly attributes his refusal to sign to his dad, explaining how the idea of the “label sharks” was so ingrained in his perception, and how the idea of a label contract held such stigma. Another interesting comment from Chance hinted at artists not actually being allowed to read their contracts. Without giving full details or anecdotal evidence, that small statement is a little scary.

The lecture also covered areas of the industry that not enough artists, and certainly not many people outside of music, understand fully. Explaining to the audience the workings of master versus publishing rights, and how music is effectively owned and sold, Chance summarises it as “this shit is goofy as hell!” Mentioning the word “constraints” fairly frequently in his dialogue about the industry, there is a clear feeling that the rapper is more than a little wary of the music industry at large. 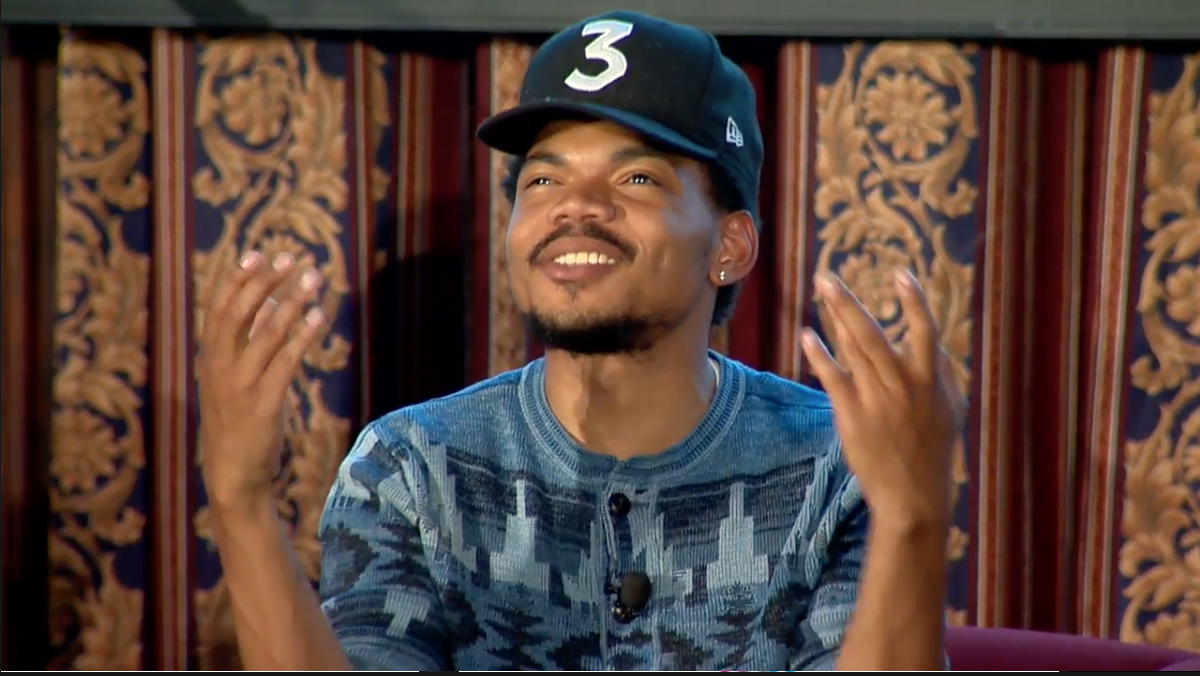 Discussing the evolution of music, he talks about how “the music industry has tried to keep up with music.” He maintains that music is always evolving and changing, and a lot of the struggle we see within the business is the industry trying to evolve alongside it. Another key point Chance made was talking about music streaming; as this year’s Music Report details the first year in which digital sales has overtaken physical, and sees music streaming account for an even larger proportion, the idea of the value gap is very real.

Naming all the usual suspects where streaming is concerned, Chance offers that streaming is the “new model” and does have a lot of benefits – particularly the fact that “all musicians have access to these platforms.” But he also gave his opinion that “there’s a lot of things that I disagree with, with how that music is quantified. When you put out music on a streaming service, like an album… if each song gets 1500 plays, that’s the equivalent of one single unit sold.”

While many of us are aware of the dispute between artists and services like Spotify, and a lot of people understand that the concept of royalties is mostly the cause of the trouble, this statement illustrates the problem perfectly. It gives a very good idea of the exact renumeration an artist can expect to receive from streaming, and how it is still not evolved to cater for the market.

Kitwana also touched upon Chance’s political activism, in particular his meeting with President Obama in April to discuss the My Brother’s Keeper Challenge, which promotes intervention by civic leaders in the lives of young African American men to address their unique challenges and to promote racial justice. He asked Chance whether the music or the activism came first for him, which was the vehicle for the other. The rapper responded “I like to attack my music as just myself” and also considered whether it was “better to be a mouth or a fist.”

Read our review of Chance the Rapper’s Coloring Book here.