Big Scary have shared another new track from their forthcoming album Animal, titled The Opposite of Us. It follows previously released singles Organism and Over Matter, in their first new songs since 2013’s excellent Not Art.

The album has been divided into four distinct sections, as detailed below. While the first two singles were lifted from the Hunting and Waking sections respectively, The Opposite Of Us falls under Resting.

The track somehow feels closer to earlier Big Scary music than the previous two singles, as though kind of bridging a musical gap between Not Art and Animal; I think this stems from the warmer melody and the poised piano chords, filling up the soundscape atop calm percussion. There’s a lovely sentimental feel to this single, with frontman Tom Iansek’s warm vocals soaring through heartfelt, reflective lyrics and an emotive atmosphere overall.

Animal comes out on September 2, 2016. below, find the tracklist and tour dates – tickets are on sale now.

Hunting – Oxygen, Organism, Double Darkness, Savior Add Vice
Lurking – Lone Bird, The Endless Story, Flutism, Up and Up and Up
Resting – Breathe Underwater, The Opposite of Us, Heaven on Earth
Waking – Over Matter, Lamina 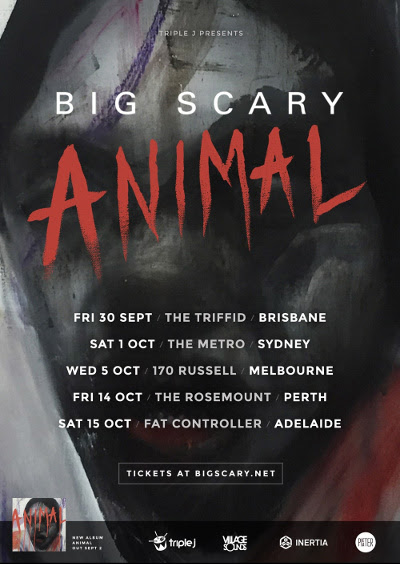