Last week, LA Weekly published a stupid article about Sky Ferreira. It was titled Sky Ferreira’s Sex Appeal Is What Pop Music Needs Right Now. It’s not that it was categorically misogynistic in that it was anti-women, it was just stupid. Reductive, extraordinarily one-track-minded, and offensive on numerous levels.

After Ferreira responded, the publication’s music editor apologised. But the story, and the official response to the story, are absolute bullshit, both as an example of extremely poor “music journalism” and of degradative pigeonholing of an artist in a way that flatly ignores their art.

The story begins by appointing Sky Ferreira to the role of sex symbol. It basically says that this status is what’s put her on the map and kept her there. You know, not her music or whatever, duh. The first three paragraphs talk about her breasts; their size, their likeness to Madonna’s, and generally just how awesome and great they are.

The fourth paragraph down – yes, fourth – then mentions, “But Ferreira is more than just a sex symbol,” before quickly insulting her singing abilities with more less-than-favourable comparisons to Madonna. The next few paragraphs work hard to focus on everything about Ferreira other than her music: her looks, her “nasty” persona, her acting, modelling and more. If this was a piece about sex appeal in 2016, sure, maybe some of this would be relevant. If it was no more than some fluff piece in a tabloid titled 10 Great Things About Sky Ferreira’s Tits, it would genuinely hold more merit. Hell, if this was an article about aesthetics, art and photography, it would be of more interest and relevance. But this article is premised as being about her role in the music industry. And that’s where the problem begins. The article goes on and on about her looks – her chest, her blonde hair. The real kicker for me was this paragraph: “Male subjectivity aside, the cosmetic potency of Sky Ferreira’s sex appeal shouldn’t be objectified or rejected; it should be analyzed, studied, photographed in the same way we’ve spent decades writing essays about Elvis’ hips and Madonna’s breasts.”

Look, nobody is here to deny that sex appeal is and always has been a factor in the careers of many. Of course Sky Ferreira has sex appeal, she’s fucking beautiful, but that’s not the point. The point is that from a musical standpoint, she’s a lot more than that. But this article, which apparently exists to specifically discuss her presence in music, forgot that.

Today, the amazing, glorious thing about the music industry is that sex appeal is not as necessary as it once was – there are plenty of artists getting by just fine without having to bank on golden hair and perfect curves.

Sky Ferreira has sex appeal. But that’s like saying, Sky Ferreira likes coffee. It may be true, but it has no grounding on her musical abilities. The fact that an entire article has been written about her as a musician, yet barely mentioning her music in any context other than racy videos or photographs, is the problem.

Ferreira then responded with a series of tweets. Here it all is: 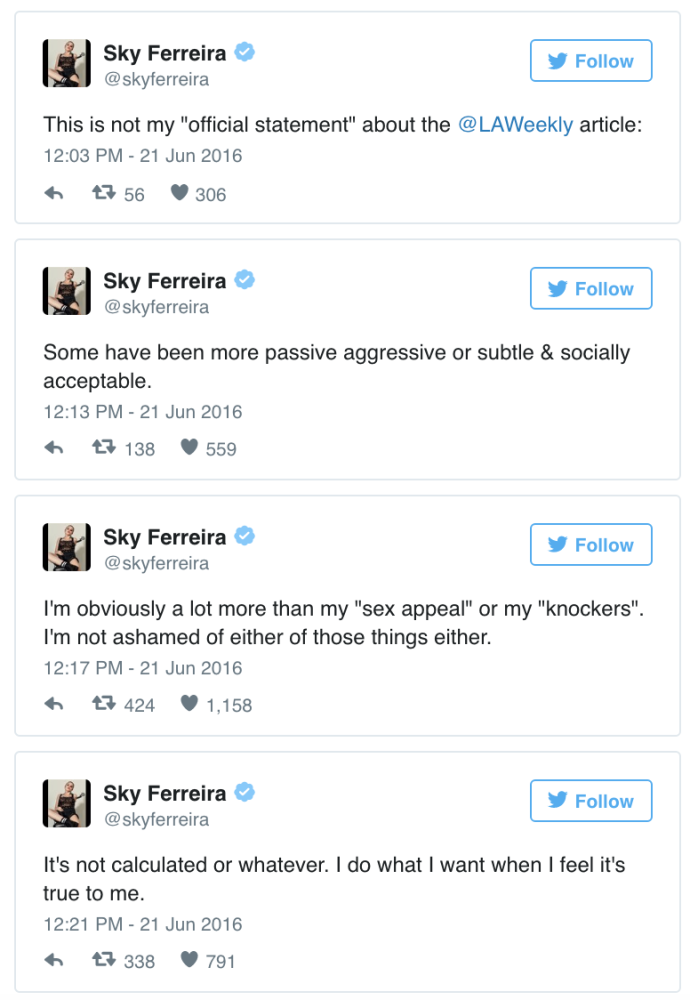 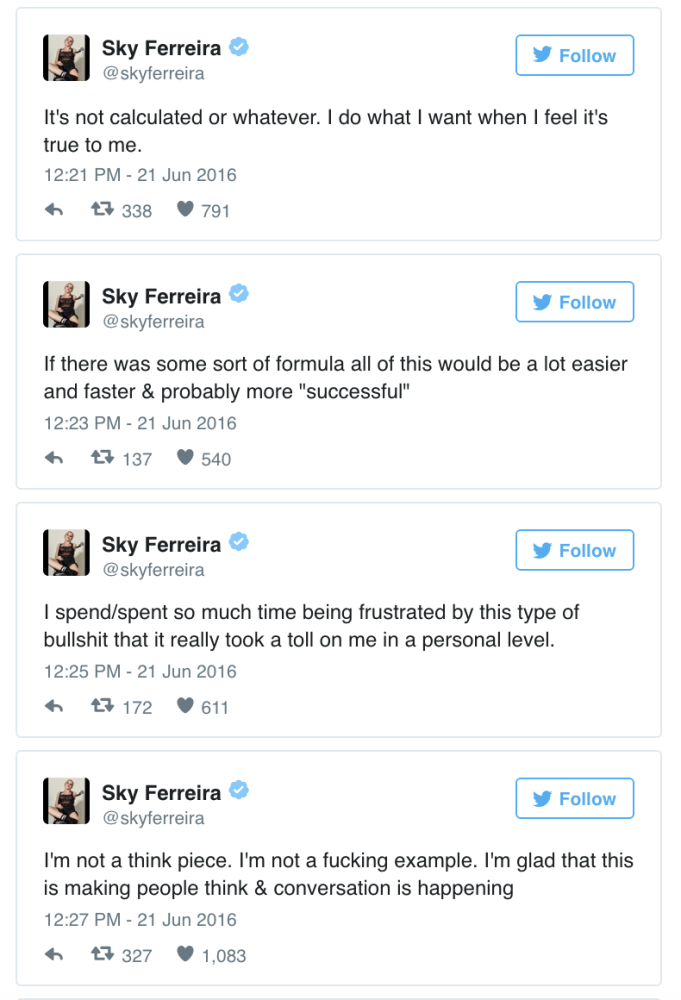 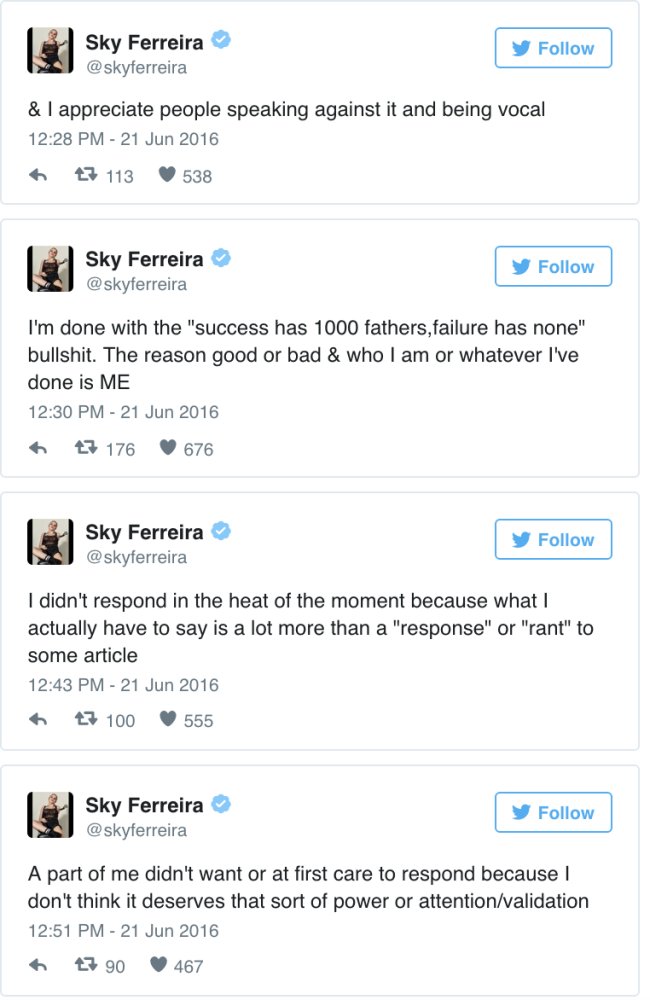 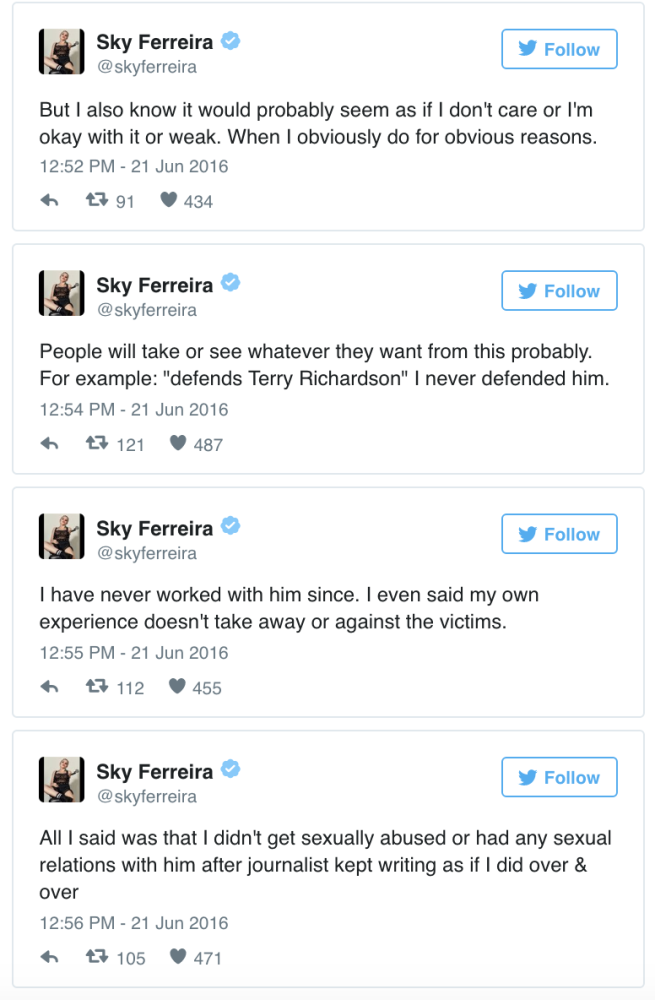 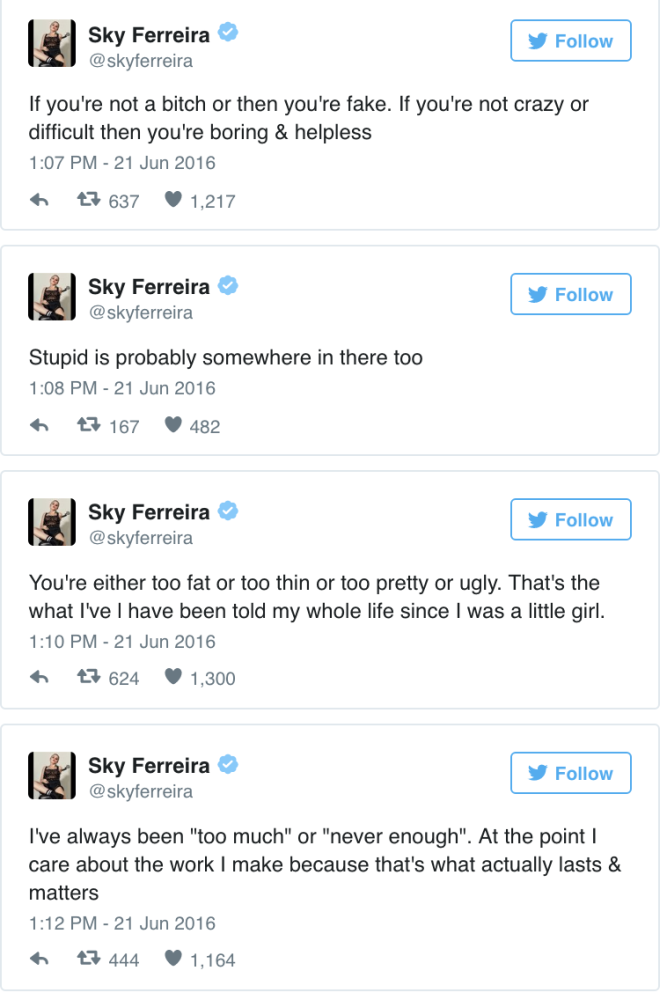 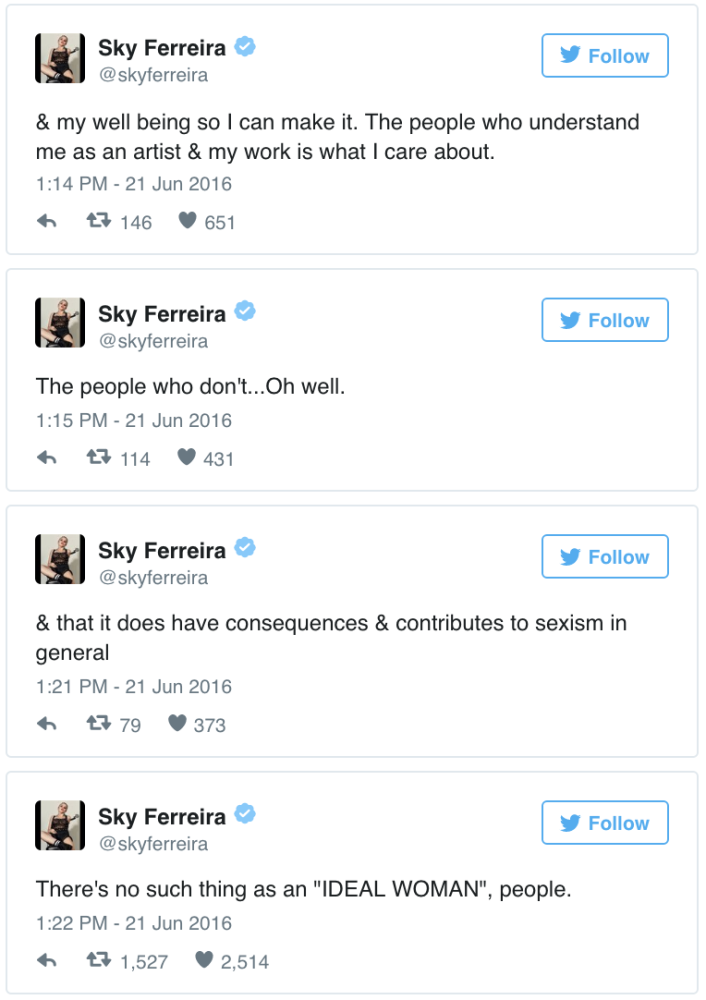 Then, what made matters even worse was the website’s apology. The editor says he’s sorry, he says he thought he was balancing the line between provocative and wrong. Well, as a news editor myself, let me break it to you: that is total fucking bullshit. He did not think that this was some grand artistic expression about a cutting-edge artist. There’s no way that this article could have begun that way and ended up where it did.

It a) is controversial b) talks about tits nonstop and c) is prefaced by a photo of a half naked girl. This article was published for clicks plain and simple. It’s the ultimate clickbait: not only does it rope in the average reader, but it’s caused enough controversy to even draw in the attackers. There’s nothing wrong with wanting clicks, but don’t you dare deny it by saying you thought you were making some regal artistic statement about the sentiment of feminism and female sexuality in the pop music industry today. You weren’t, that’s a lie. You wanted clicks, you got them. Well done.

The editor immediately separates himself from the relentlessly critical response. “It’s clear that most of the people who read it feel pretty passionately that we crossed into offensive territory,” he begins.

“[author]’s intention, the way I saw it, was to write about an artist he admires in a way that didn’t shy away from her use of her image and sexuality as a part of that artistry. I felt that, in doing this, he wasn’t trying to objectify or degrade her.” – Well, sure, that would have made for an interesting article, had it actually been the case. But it wasn’t. This article quite literally objectified her; it spent at least double, if not triple the amount of time talking about her breasts than it did her music. Yet you passed it off as a music article?

“Many people have demanded that we take down Tavana’s column. But once you publish something on the internet, it’s out there forever in one form or another — so for us to attempt to erase it would be disingenuous.” – What the editor’s really saying here, is, “we’re getting a shitload of traffic to this article, so no way are we removing it! Haters gonna hate, but we’re earning dollars off every complaint this receives.”

“My biggest regret, in all of this, is that we may have made people feel that L.A. Weekly is a publication that doesn’t take women or women’s issues seriously, because that’s not the case,” he pleads. As I said before, I honestly don’t think the article indicated this. On a fundamental level, yes it is sexist, but I don’t think that this author, or his editor, hates women or is specifically trying to degrade them, or is not taking women’s issues seriously. That the editor used this is a point at which to show off his own publication’s affinity to women’s rights is showing that he still doesn’t understand why people are critiquing it. Yes, Ferreira’s point about the ingrained categorisation of female celebrities obviously has its roots deeply embedded in sexism, but this article is not out there to degrade us all. It put the spotlight in the wrong place. It attempted to provide cutting edge commentary on music and pop culture, when really, it was no more than an excuse to talk about how she looks, and to bring up a number of image-based contentions that she was then forced to address. It had nothing to do with her being a musician, or the music industry, or pop music, or even general sex appeal and “an artist [who] didn’t shy away from her use of her image and sexuality” in any way whatsoever.

So thank you, LA Weekly, for not only bringing to light the problems of the music industry, but for those in righteous journalists who feel like they can say shit like this and get away with it. I hope you enjoy all the clicks, because you won’t be enjoying any respect.