Taking photos and videos at concerts is easily one of the most irritating things that anyone who attends any concert, ever, can possibly do. One or two snaps, sure, fine, but so many people inexplicably try to film or photograph an entire concert, rendering the whole “live experience” effectively pointless and undoubtedly ruining the moment for those standing nearby.

There have been a few attempts to prevent people taking photos at shows, from requests and signs, to straight up taking the phone away, to start-ups and more, but there’s been little, if any overall success.

Well, the good news is that Apple are on the case. News has surfaced that the tech giant has patented technology which somehow disables a phone’s abilities to take photos or shoot video in specific situations – such as at a concert or a “sensitive location,” according to 9to5Mac. Apple apparently first filed for a patent back in September 2014, and it has been granted this week.

How it works is actually quite interesting, albeit extremely complex. In a nutshell, the internal camera will be set up to detect an infrared signal, which can then be used to disable photo and video-taking. This means that small “infrared emitter” could potentially be placed inside a venue (or cinema, theatre and other places where photography and filming is prohibited) and will “generate infrared signals with encoded data that includes information about that object.” Interestingly, as well as blocking a camera, the same infrared technology can be used to provide information, such as at a museum or art gallery. “An electronic device can then receive the infrared signals, decode the data and display the information about the object to the user.”

Among other things, the patent application talks specifically about concerts: “In some embodiments, infrared data can be received and an electronic device can modify a device operation based on the infrared data. For example, an electronic device can disable a function of the device based on received infrared data. In some embodiments, a transmitter can be located in areas where capturing pictures and videos is prohibited (e.g., a concert or a classified facility) and the transmitters can generate infrared signals with encoded data that includes commands temporarily disabling recording functions. Accordingly, devices near the transmitter may be able to detect images to receive the infrared signals and the commands encoded in the signal but those devices may be unable to capture pictures or videos because of the commands.”

Here’s a diagram to explain it further: 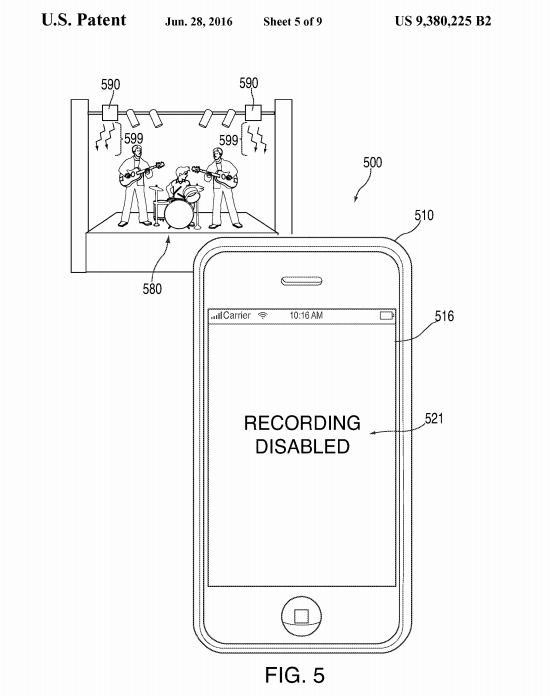 For more information, you can check out the entire patent right here.

If this technology comes to fruition, it could be a really great addition to events across the globe – not just music, but films, theatre, and many other areas including banks and schools. For now, let’s all fantasise about that magical day when you can go to a show without having to deal with a hundred phones waved around, obstructing the view and the experience.