Money makes people do weird things. Like, really weird. Celebrity endorsements come to mind as the birthplace of some of the more batshit insane advertisements that have seen the light of day. Following on from the announcement that Soulja Boy just signed a $400 million contract with an online poker fund, we’ve put together five of the craziest and hilarious musician endorsement deals. A word of warning, don’t read this article while you’re at work, because some are too ridiculous to contain your laughter and/or incredulity. Also there’s a Victoria Secret ad, and it’s really creepy.

Yes, this happened. Method Man, formerly of the legendary Wu-Tang Clan, not only appeared in a 4-minute commercial for the candy company, but also wrote a rap for the sweets. The video opens hilariously with a parental caution screen, claiming that it “May contain content inappropriate for children.” Yeah, like extreme amounts of sugar. Also the lyric “pussy pump,” bleeped out in the final edit. Watch it below, and ponder how far the poor man has fallen. This is the same man who got a solo track on Enter The Wu-Tang (36 Chambers), and who The Source named in their list of 50 top lyricists.

This one isn’t a video or an ad, but rather a campaign. Snoop Dogg legitimately teamed up with Norton Anti-Virus to hold the “Hack Is Wack” contest, where contestants were to create the best 2-minute rap song about “viruses, phishing attacks, identity theft and other cybercrime.” The prize? A ticket to L.A. to see a Snoop Dogg concert. Yes, this really, really happened. 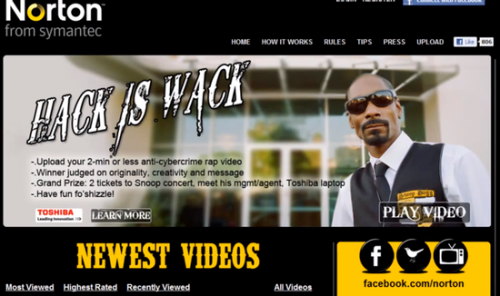 Dick pills. Warren G, west-coast rapper/producer and stepbrother to Dr. Dre, starred in a commercial for dick pills. The same Warren G who was nominated for two Grammy’s, and here he is sitting on the toilet in some random guy’s apartment, reading a newspaper and handing him Viagra knockoffs. And you bet your ass he makes a Regulate joke.

This one is less weird than the others, but way more creepy. Of all the people you wouldn’t want to see in a lingerie commercial, wrinkly old Bob Dylan is up there. His pouty/brooding expression rivals that of Jon Snow, but Snow is a) much more attractive than Dylan, and b) hardly ever surrounded by super models in their undies. Bob, you have no right to be all pouty, and you definitely have no place in this super creepy ad. He looks like a homeless man who wandered onto the shoot.

30 seconds. That’s all this commercial is, and it’s changed my life. I have no words, so please, just watch it.

I don’t know what’s better, the completely wooden line of, “Awh ah cahn’t tell the diffrence,” or the fact that he cracks an egg on a mini skull. This whole clip is so “…What the fuck?,” it’s better than most modern art pieces. I want this video to play at my funeral.