People have been saying that rock is dead for years now. And it seems that, statistically, they are are actually quite likely to be correct. But it isn’t just rock, a new study has found that musicians in general die up to 25 years younger than the average person – with far higher rates of accidental death than many other groups.

The study, which was conducted by Sydney University academic Dianna Kenny, examined the lives of 12,665 performing musicians, from all popular genres, who died between 1950 and June 2014. For unspecified reasons, though I would suspect circumstantial, 91% of the cases were male.

In her report on The Conversation, psychology professor Kenny wrote that, “The results of this study are disturbing… Across the seven decades studied, popular musicians’ lifespans were up to 25 years shorter than the comparable US population. This is clear evidence that all is not well in pop music land.”

Music as an industry has a history of high profile deaths, with concepts like the 27 club and dreams of burning out rather than fading away. Unsurprisingly, Kenny cites this kind of “valorisation” as one of the contributing factors. Artists like Jim Morrison and Kurt Cobain have been immortalised following early, tragic deaths while their musical legacy became infused with the glamour of that tragedy. Kenny also suggests that this attracts those suffering from depression or suicidal tendencies, as it can transform those leanings into something that is celebrated. 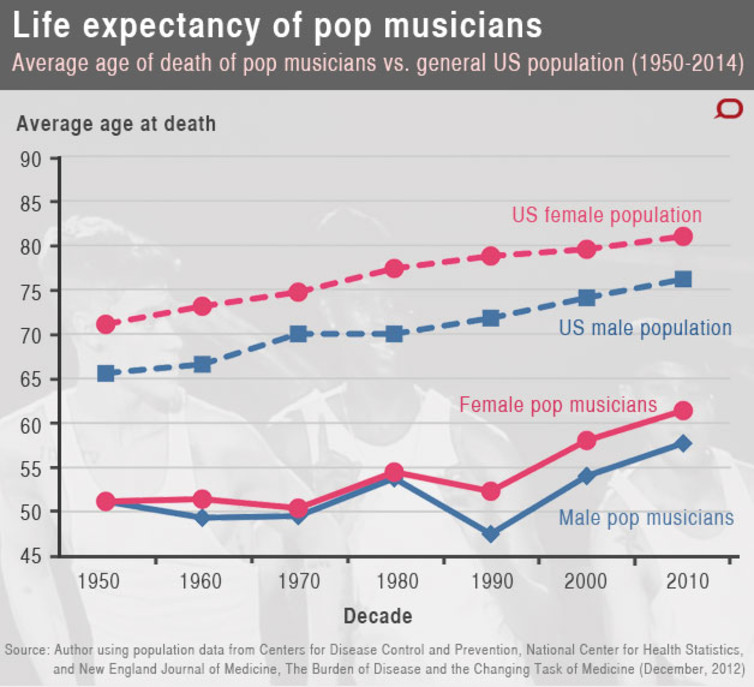 Image via The Conversation

The old mantra of “sex, drugs and rock ’n’ roll” is well known, and also well observed according to Kenny; “The music scene celebrates drugs and promiscuity and valorisation of early death, so young musicians who are depressed and suicidal are attracted to these types of environments.” She found that suicide rates amongst musicians were between two and seven times greater than in the general population. Explaining her findings, Kenny also commented on ABC News that musicians “are meeting fellow travellers where they amplify each others suicide, depression, or substance abuse and that gets into an-out-of-control spiral leading to early death.”

The one positive note from Kenny’s study is that the idea of the 27 club is not as certain as musicians may dread. Despite the sad demises of Amy Winehouse, Cobain, Jimi Hendrix and Janis Joplin, most artists live well beyond this age. However, Kenny has accompanied her findings with a warning for the music industry. Labelling it “a very dangerous place for young people”, she called for more support for musicians and better awareness of issues concerning mental health and addiction.