American rock band Eagles of Death Metal, who were on stage at Le Bataclan in Paris last November when gunmen opened fire, have teamed up with the Manantler Brewing Company to produce a collaboration beer – Boots Electric Indian Pale Ale.

Which means you can now drink beer for a good cause, as $1 from every beer sold will be donated to The Sweet Stuff Foundation that helps the families of the victims of last year’s Paris Attacks.

I fucking love this, as it combines my favourite hobby (drinking beer) with donating money to a good cause.

The beer first appeared at the Eagles of Death Metal shows through Canada, and quickly sold out. The bottle’s label was designed by Rachel Riordan, and captures the Californian band’s typically wild style, showing the singer, Jesse Hughes, riding a charging, roaring tiger, rodeo style. 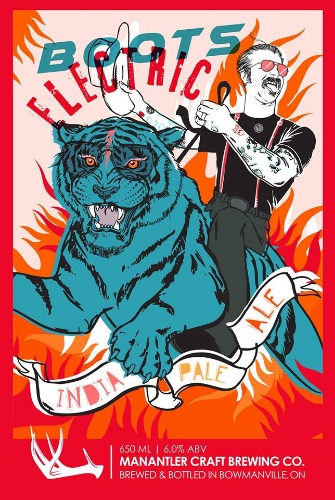 Manantler co-owner Chris Allott told the National Post his company will brew another batch, which should be ready to drink in about three weeks. Fellow co-owner James Gorry told the Toronto Star the band didn’t take much convincing to get behind the beer.

“They didn’t ask what size brewery we were or where we were,” Gorry said. “I think they liked the idea and they liked that we came up with it based on being musicians ourselves and being moved by the events that happened there and also just ultimately being really big fans of Eagles of Death Metal.”

No word yet whether the beer will be available for export, but if you see it, buy it, and support around 130 families affected by the tragic incident.