30 years ago, Rick Rubin gathered together down-and-out rock gods Aerosmith and up-and-coming hip-hop crew Run-DMC in a studio in Manhattan to make history. They didn’t know it then but what they created in that studio would launch hip-hop into the world of popular culture. It paved the way for rap to take over MTV and pop radio, and for Run-DMC to become rap’s first rock stars.

In 1986, Run-DMC were working on releasing their third album, Raising Hell, and they were about to hit it big. A visionary 22-year-old kid from New York University named Rick Rubin was producing their album. Rubin said, “We had finished the album . . . and I listened to it and felt like there was something missing. That idea worked simultaneously with this conversation about how hip-hop and rap music was not music. To people who were not already fans of it, the gap was so far that not only did they not understand it, but they did not understand it to be music.”

He was clearly yet to realise at the time that the song he envisioned for the album would achieve exactly what he intended.

“I was looking for a way to bridge that gap in the story of finding a piece of music that was familiar and already hip-hop-friendly so that on the hip-hop side it would make sense and on the non-hip-hop side you’d see it wasn’t so far away.”

At the time, DJs including Run DMC’s Jam Master Jay were already using the breakbeats of rock songs as backing tracks for rappers, but they weren’t really embracing the genre. Darryl McDaniels (DMC) said of the beat from Aerosmith’s Walk This Way,  “Our thing was, ‘Go get ‘Toys in the Attic’ and play number four.’ We had no idea that there was singing or what the song was, but we knew the beat. It was a hard breakbeat.”

It was Rick Rubin who actually had the idea to bring Aerosmith’s Steven Tyler and Joe Perry into the studio and re-record the single with Run and DMC rapping the lyrics. He believed it would help them break the mainstream market which, until then, had not embraced rap and hip-hop. Some pop radio stations played R&B, but they would never have considered rap – especially if it came from the urban “hood” culture that Run DMC represented. 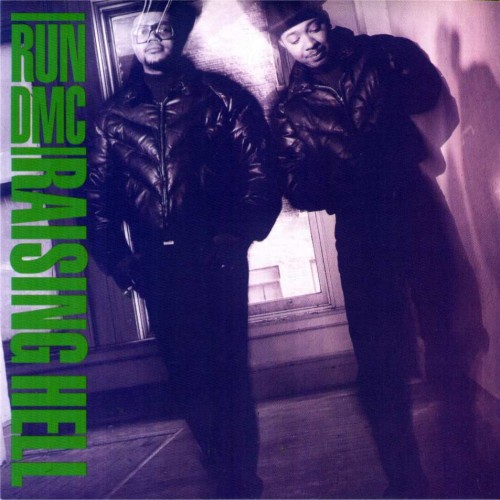 If Rubin could get them to rap Aerosmith’s lyrics, maybe people would realise that the content is the same, but it’s the delivery that’s different. Originally, the Queens rappers weren’t particularly thrilled at the idea of rapping what DMC described as “hillbilly gibberish, country-bumpkin bulls—”.

When they actually went in to record, DMC said, “You know how you make a kid sit down and eat his vegetables? ‘Oh, hell no, you sit down and eat those greens.’ And it takes the kid an hour to eat one green at a time? That’s what me and Run were doing.”

They threw down the verses, altering bits as they saw fit while Steve Tyler sang and Joe Perry played that iconic guitar riff. When reminiscing on that day in the studio, Rick Rubin said, “The main thing I remember from the session was Joe playing guitar and how impressive it was and Run and D doing the calls in front of Steven and Steven doing the ad-libs and the chorus. And I remember just thinking how Run and D didn’t like the lyrics and here’s the guy who wrote the song.”

Aerosmith were seemingly past their prime. There were bad record sales, unresolved issues among band members and far too many drugs. They needed something to help launch a comeback and re-invigorate them to get sober and serious about their music. They agreed to re-record the song without really knowing what to expect.

Steven Tyler and Joe Perry left the studio that day not knowing if the song would even be released, but Walk This Way was indeed released as a single from Raising Hell in July 1986.

In order for the song to make it big, it needed to be played on MTV. At the time, MTV were the taste-makers of pop culture. They had real power and they weren’t playing rap music. Jon Small, who directed the video for Walk This Way, had the idea of putting a physical wall between the two bands and having them tear literally it down.

The video is essentially the visual representation of what Walk This Way did for Run DMC and rap as a genre. Rock became rap and rap became rock. The video showed that rappers could waltz onto a huge stage with one of the biggest rock bands in the world and command it with equal strength. Watching Steve Tyler in leopard print flairs throw his arms around Run and DMC in laceless Adidas sneakers is definitely something to behold.

Walk This Way became a huge success hitting number 4 on the Billboard charts and showing the world that rock and rap could work together – they weren’t that different. Run DMC became rap legends after that. They probably would’ve done it on their own, but this song forced the white kids in the suburbs to listen to real hip-hop and sparked a legacy that continues today. The coming together of those two unlikely artists paved the way for rap to be incorporated into any genre and vice versa. This song was a precursor to some of the incredible collaborations and samples that are mixed together to form modern music’s most innovative hip-hop songs.

To read all about the making of the song and watch footage of Run-DMC, Steven Tyler and Joe Perry in the studio recording, check out The Washington Post’s oral history of Walk This Way.