Yesterday, footage of a female fan being physically kicked off stage  by the front-man for pop-punk band The Story So Far emerged. Understandably, the band, and singer Parker Cannon have found themselves in some serious heat – and rightfully so.

Contrary to some beliefs, when it comes to hardcore and punk shows, it’s an unspoken rule that you take care of each other in the pit. A good band with members who know how to do their job, which is not just to play music, but to ensure everyone has a good time while they do so, will reiterate that “take care” attitude through not only their words, but their actions. That remains the case even when someone does something stupid like try to take a selfie on stage.

That’s why it’s a little unnerving that in response to the video, the girl in question, Becca Illic has now come out and said that it was all in the nature of the show. If that’s how you can expect to be treated as a fan of The Story So Far, then I’m glad I’d never even heard of them until yesterday (also they’re kind of terrible but that isn’t really relevant).

Commenting on the Facebook video of the incident, Illic has made what she says can be taken as her official statement on the matter. In the comment, she asks for people not to make negative remarks regarding the incident and goes on to place the blame for Cannon’s actions on herself. 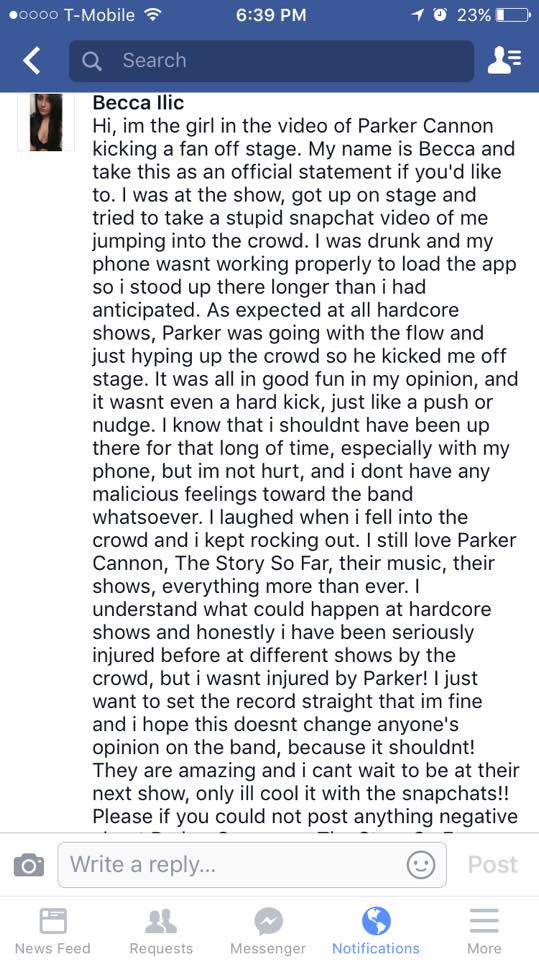 Since the video surfaced, utterly massive post-hardcore band Funeral For A Friend have weighed in on the issue of crowd safety. In a statement posted to their own Facebook page, the Welsh band have displayed their disgust for Cannon’s actions and condemned the attitude he displayed towards fans. Though they’ve some curt words for Cannon and The Story So Far, describing the incident as a shame on the whole scene, they finish their message by saying “Set a positive example, not a negative one.” Too damn right.