Much like everyone else not in Indio, California right now, I’ve spent a lot of time this week perusing Coachella coverage. This morning, I read a lengthy review on a website I’ve been a loyal fan of for years. Overall it was just your average review, but one part of it really, really pissed me off.

Reviews like this are exactly why people think music reviewers are all sanctimonious assholes. 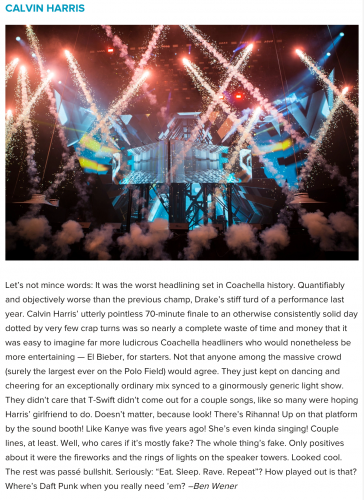 I’m sorry Ben Wener, but that is the most entitled, elitist review I’ve ever read in my life.

Look, I’m no Calvin Harris fan. I wouldn’t have watched his set and I’m not here to defend his music or EDM. But this is so remarkably self-righteous and pretentious that it feels like a mockery of itself.

“Calvin Harris’ utterly pointless 70-minute finale to an otherwise consistently solid day dotted by very few crap turns was so nearly a complete waste of time and money… Not that anyone among the massive crowd (surely the largest ever on the Polo Field) would agree.”

Ben immediately separates himself from the crowd. High up in his panopticon tower, peering down at the hapless plebs below, he notes that it is the largest crowd ever seen at that stage (like it’s a bad thing). They were all having a great time, but not Ben. Fun is for the commoner. Fun is for the weak-minded and ignorant.

“They just kept on dancing and cheering for an exceptionally ordinary mix synced to a ginormously generic light show.”

OH NO! I’m at a festival that I paid a tonne of money to attend and now I’m dancing to the music and enjoying myself! THIS IS TERRIBLE!

Who are you to criticise it so wholly, so definitively, to title it The Worst Headlining Set In Coachella History? Don’t answer, “I’m a music reviewer and my opinion’s more important,” because that’s the wrong fucking answer.

You don’t need to be a music journalist to know what a bad set sounds like. A “bad” set is usually one that’s boring, messy, lacking in energy, or if the artist doesn’t care about being there, if they’re too wasted to play, if they don’t care about the crowd, if they are clearly just going through the motions, etc. Describing Drake’s 2015 set as a “stiff turd” is a great example of a bad headline set. But you’ve literally just written about how thousands of people were loving the hell out of Harris’ set.

What you have described is not The Worst set, it is not even a bad set. It is just a set that you didn’t enjoy because you don’t like Calvin Harris’ music. There is a huge difference in those two statements.

Watching that crowd having such a great time, there’s no way it could have been described as The Worst Headlining Set In Coachella History. You could’ve said he pulled a massive crowd, threw a really impressive, or even excessive light show, and played his hits to those who love them. It’s not your thing but it evidently is for the thousands who paid for a ticket. Instead, you have ridiculed and degraded every single person there.

They didn’t care that T-Swift didn’t come out for a couple songs, like so many were hoping Harris’ girlfriend to do. Doesn’t matter, because look! There’s Rihanna! Up on that platform by the sound booth! Like Kanye was five years ago! She’s even kinda singing! Couple lines, at least.

Let me clue you in on a little secret, Ben Wener: Calvin Harris didn’t fucking perform his headline set for you to enjoy. He performed for his thousands of fans. By all accounts they had a great time, but it seems like you’re saying they should have hated it like you did.

You are clearly describing thousands of people having a great time. Yet you’re saying it as if this very fact is irrelevant. You’re saying that in spite of, or perhaps because everyone was loving it, it was shit. What a pretentious, pompous ass, holier-than-thou attitude to have.

Ben, seriously, what did you expect from a Calvin Harris set? Did you really expect it to be any different to what it was? You know his songs, you know his crowd, you have no doubt seen and heard about his immense stage productions. What else were you hoping for at a Calvin Harris show?!

Furthermore, what did you expect from Coachella? If you wanted a more obscure or less generic headliner, you shouldn’t have gone to the biggest festival in the world. Or, you should’ve just watched Deafheaven, who were playing at the same time, and are awesome.

It would’ve been fine, had Ben written that he thought it was bad because he hates the music, or because he thought Rihanna’s appearance was arbitrary. He didn’t do that though. He insulted the entire crowd, scoffed at their enjoyment, and basically said “Hey you tens of thousands of people, you’re all idiots. You’re having fun, but you shouldn’t be. You should be hating this because I hate this. I think this is The Worst and therefore, it is.”

If you hate an artist’s music you are going to hate them live on stage. That does not make it the worst, it just doesn’t. This is poor music reviewing. Get off your goddamn high horse.