The tributes for Prince, who tragically died last week, have flooded in over the weekend. Prince was one of the greatest musicians of all time and everybody, not just the musical world, mourns his untimely passing. From Elton John and Bruce Springsteen to Dave Chappelle and NASA, everyone whose life Prince touched has offered their own tributes.

Barack Obama said “the world lost a creative icon;” there was a heartfelt open letter from Frank Ocean saying Prince “made me feel more comfortable with how I identify sexually simply by his display of freedom from and irreverence for obviously archaic ideas like gender conformity etc,” and that was just on Friday. Since then, more and more have offered their own form of tribute to His Purple Highness, many of them happening at Coachella.

Rapper Ice Cube took a moment at the beginning of his set to say: “I would like to dedicate this show to my man Prince Rogers Nelson,” calling him “an icon in music and entertainment.” 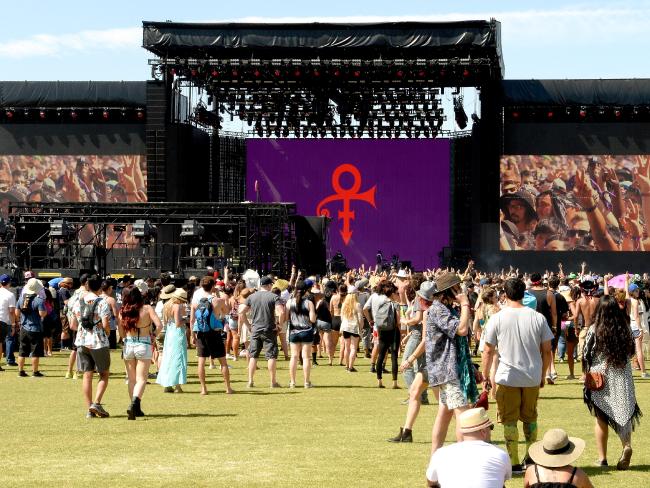 LCD Soundsystem, who reunited for Coachella, performed a cover of Prince’s Controversy from a stage draped in purple light. Before LCD came on, the main stage’s large screens played Prince’s famed rendition of Radiohead’s Creep from his 2008 Coachella performance.

Mavis Staples gave an emotional speech calling Prince her “son” before singing Purple Rain. “Yesterday I lost a dear friend. He was my son … my angel,” she said at her Coachella set. “I was on [his label] Paisley Park for seven years. During that seven years, I adopted him. He was the most beautiful spirit I ever met. He was a gentleman. He was respectful.”

Ellie Goulding covered Prince’s 1984 hit, When Doves Cry, while Sufjan Stevens performed Purple Rain with Gallant, the latter of whom covered Diamonds and Pearls with Jhené Aiko during his own set..

However, Coachella wasn’t the only place Prince was being remembered over the past few days.

Bruce Springsteen normally begins his shows with Meet Me In The City, however in honour of Prince, decided to change up his routine and open with Purple Rain.

Stevie Wonder spoke to CNN about his memories of Prince and about how much of an inspiration he was for himself and others. “He was a great musician, he loved music, he loved playing his instrument and the times that we did jam together were amazing, with all the various people he would bring together.”

Questlove, of The Roots, last year detailed being fired by Prince and being replaced by a screening of Finding Nemo. This year, he embraced the memory and played a snippet of the movie during his DJ set in Brooklyn.

At the New Orleans Jazz Fest over the weekend, Prince’s symbol appeared in the sky during during Van Morrison‘s and Pearl Jam‘s sets.

A little Prince tribute in the sky while @VanMorrison performs below. @jazzfest #JazzFest2016 #RIPprince pic.twitter.com/PB6eXqpJRB

Pearl Jam took the opportunity to cover Purple Rain at the Jazz Fest. They also played Even Flow, which Prince covered a couple of years ago. Eddie Vedder then took some time out to speak of Prince: “All of us up here were incredibly fortunate to see him a number of times over the years. Some of us got to meet him a bit. He was an intense cat,” Vedder said. “But I gotta tell you, and you just saw some great guitar playing. [But] Prince was probably the greatest guitar player we’ve ever seen.”

Comedian Dave Chappelle compared Prince’s death to 9/11 during his show in San Francisco. “This is black 9/11,” he said. “I almost thought about not coming tonight, but my band was like, ‘yo, Prince would definitely not condone that.’” Chappelle’s backup band performed a range of Prince’s hits, turning the show into full on tribute show. Chappelle’s sketch show in the early 2000s also gave us True Hollywood Stories with Charlie Murphy who famously told us how Prince rocked him in a game of basketball.

Elton John said Prince was a purple warrior during his show in Las Vegas, adding “we loved you,” and “we salute you,” before launching into I Guess That’s Why They Call It the Blues as images of Prince appeared above the stage.

Mariah Carey led her fans at her Paris show in a moment of silence and said Prince “talked me through some times when I really needed somebody. He was an incredible person.” She also dedicated her 1995 single One Sweet Day to him.

“Dearly beloved, we are gathered here to celebrate the one-of-a-kind, most brilliant, most special, most magical, most … incredible Prince Rogers Nelson,” Maya Rudolph said as she took the stage at Austin’s Paramount Theatre. “He was our hero. We loved him. And he has completely shaped our world.”

Rudolph, along with Gretchen Lieberum make up the Prince cover band Princess. During their gig at the Moontower Comedy Festival, which was already scheduled before Prince’s death, the duo led the sold-out crowd through 90 minutes of Prince tracks.

NASA have also paid tribute in their own way, by releasing an image of the purple Crab Nebula with the message, “A purple nebula, in honor of Prince, who passed away today”.

A purple nebula, in honor of Prince, who passed away today. https://t.co/7buFWWExMw pic.twitter.com/ONQDwSQwVa

These tributes barely scratch the surface with many, many more tributes coming in every day. It is clear the impact that Prince had on the world, and although he is no longer with us, his music and persona will continue to inspire people in decades to come.

Prince will be missed.