The Cure are obviously one of the biggest draw cards on the Splendour and the Grass 2016 bill, and today they have announced a pair of headline dates in the country. The goth rock stalwarts will take the stage at arenas in Sydney and Melbourne prior to their headline set at the Byron Bay festival. Fear not, Adelaide and Perth – further dates are expected to be added in the coming weeks.

It has been five years since The Cure last visited Australia, when they performed their Reflections concert series for Sydney’s Vivid LIVE, performing three full full albums in a row – Three Imaginary Boys, Seventeen Seconds and Faith on two nights at the Sydney Opera House.

While The Cure have not released an album since 2008, the legendary Robert Smith and co will be touring throughout 2016 on their first major run in eight years. Fans can reportedly expect a full look back at the band’s 37 year history, as well as unreleased tracks, deep cuts and a totally new stage production.

Tickets go on sale at 10am on Friday, May 6 – details here. Telstra customers can use a 48 hour pre-sale beginning at 10 am on Tuesday, May 3 – details and info here.

Click here for all Splendour in the Grass sideshows

Read our reflection on The Cure’s stunning Disintegration 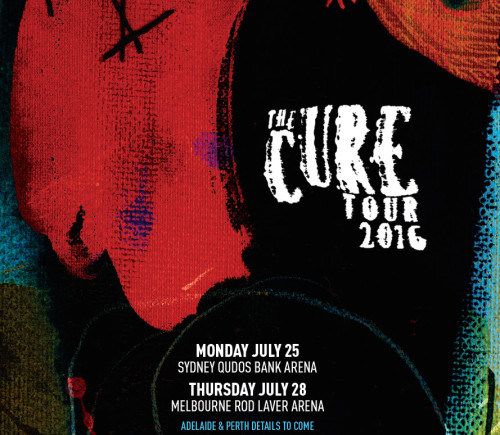