Skeaz Lauren—rapper, self-proclaimed style icon, Godfather of Gutter, and Polo King of Australia—is getting ready to go out. He is talking into a camera, standing in front of a double bed piled with clothes. “Now! The hardest part of my fucking day, is getting dressed. I know I look fresh. I know your bitch wanna fuck me. I know you wanna be me.” His tone is chirpy and patronising—a deranged Scotty Cam introducing the next renovation. “I’m thinking this. I’m thinking my ‘98 flat panel.” He holds a cap close to the camera. “Got that?” By the end of the video, the room is strewn with dozens of discarded outfits. Getting dressed is no small matter to Skeaz Lauren. It has to be perfect. His body is like that of a monarch’s: a stand-in for all of his principalities and all of his subjects.

His chief turf, the one he defends most fiercely, is gutter rap. Hailing from the housing projects of Western Sydney, gutter describes a uniquely Australian style and aesthetic; it’s all Nautica, white singlets, pit bulls, and nasal Aussie accents.

Perhaps the best introduction to gutter is a track called Started From the Gutter by Skeaz Lauren and Sky’High, an Indigenous Australian rapper from Sydney. The clip opens with Skeaz emerging from a pitch-black night, mouth open, eyes wide, looking either somewhere far away or deep inside. He wears a white cap, a white Ralph Lauren Polo shirt, and a navy blue sweater: a pun on a private schoolboy.

The track lurches through a cover of Drake’s Started From the Bottom, supplementing the rap trope of coming up through hard work with a tragicomic twist. Where Drake says, “Started from the bottom, now we here/Started from the bottom, now the whole crew fucking here,” Skeaz Lauren raps, “Say they’re from the gutter, but I never ever seen you there/We the gutter rap pioneers/Started from the gutter, now we’re all still fucking here.” This is both a brag and a bittersweet lament; they may own gutter, but the gutter still owns them. In the background, a pitch-dropped couplet – “we just want the credit where it’s due/give a fuck about me, give a fuck about you” —repeats over and over, scratching through the celebratory glitz of Drake’s original to its underlying paranoia.

Here, gutter is made even grimier by the memory of its slick source material; same with Skeaz Lauren. But even as the differences between cover and original are thrown into sharp relief, an unexpected affinity emerges. Both Drake and Skeamo represent our culture’s obsession with authenticity: who has it, who doesn’t, who is allowed to trumpet it, who isn’t. And though hip-hop has always been a catchment for questions about authenticity and aspiration, the responses generally take the form of an investigation: are they who they say they are? Or are they faking it?

Started From The Bottom was Drake’s defense against claims that he faked it. The allegations are well-worn by now: Drake was never at the bottom. He never knew violence or want. He had a comfortable upbringing with little experience of the world he rapped about. In fact, Drake garners all of the same criticisms that are frequently leveled at Australian rappers and Australian hip-hop in general. For Australian rappers, this takes the form of being compared unfavourably to Americans. We appropriate the conventions of gangsta, the argument goes, despite our lack of gang culture, drive-bys, drug wars, hardship. Of course, this rubric for judging authenticity collapses under even the briefest interrogation. We have all of these issues as well as inequalities and other forms of violence, such as ongoing colonisation, specific to Australia. Skeaz Lauren is unfazed by such gripes about appropriation. He rolls around in Drake’s track—the ground zero of North American hip-hop—with absolute entitlement. And so he should. An ‘inauthentic’ rapper appropriating an ‘inauthentic’ brag-rap, created by a rapper appropriating an ‘authentic’ experience of hardship. As bearers of an impossible standard of authenticity, Skeaz Lauren and Drake make perfect sense together.

Started From The Gutter also showcases Skeaz Lauren’s preoccupation with fashion. He makes room early in the track—and in most others—to introduce himself as a style icon: “I’m a style icon, you cunts just want that fashion/I’m on one, they love me, Polo king of my country…” Although the gutter aesthetic appears at first to be more chav than gangsta, Skeaz Lauren’s fetishisation of Polo has its roots in the American Lo-Life movement. Originating in New York in the 80s, Lo-Life was founded by young black men obsessed with the brand Ralph Lauren, a brand typically synonymous with WASP culture. As well as coveting the quality and design of vintage Ralph Lauren, Lo-Lifers identified with this sense of aspiration. Racking and wearing Polo was a way of closing the gap between rich and poor, of short-circuiting the stratification of class, much as Lauren had done through his label. 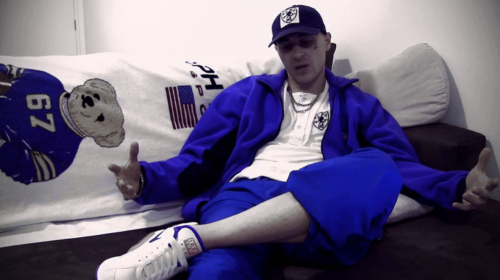 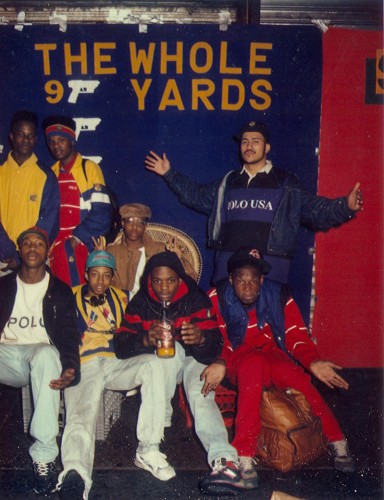 The film clip for Drake’s Started From The Bottom taps into a Polo vision of affluence: a middle-class fantasy sequence hacked by young troublemakers. The scenes alternate between depictions of happy-go-lucky frustration – Drake and his crew as naughty boys wreaking harmless havoc – and fabulous success. A shift at the supermarket derails when an attractive woman walks in; she rejects the nerdy, bearded OB in favour of Drake’s hot cousin, Ryan Silverstein. Drake sits in the cockpit of a private jet and reaches for the control panel, before the (white) pilot swats his hand away. But by the time the chorus rolls around a third time, the PG peeves of daily life have given way to unhindered adult pleasure – we see Drake and his pals driving golf buggies, laughing against sun-flares. They scramble from the vehicles into the mansion that awaits.

Though Started From The Gutter shows little concern for upward mobility, Skeaz Lauren does make skirmishes onto WASP turf. By supplementing his name with ‘Lauren’ and his image with Polo, Skeamo goes through the motions of an upward climb, even as he stays gutter-bound. Take his video for Polo. Released five months after Started From The Bottom and two months after Started From The Gutter, it dispenses with Drake’s grand narrative of success and hones in on just one of its symbols: the golf buggy. Skeaz Lauren is on a golf course, wearing head-to-toe Polo, rapping about Polo, riding round in a buggy and occasionally jumping out to hit balls. The crucial difference between the two clips is one of teleology. Where Drake has a destination (a house party with all his friends), Skeaz Lauren just rides around until the clip ends. And where Drake’s country club dalliance is an expression of wealth and power, Skeaz Lauren’s aimless trip around the golf course is the perfect expression of his particular brand of futile aspiration.

In Australia, Polo has become a symbol of precisely this. On Boxing Day last year, Skeaz Lauren posted a photo on his Facebook page of a pile of security tags, all notably devoid of the items they were meant to secure. One can only assume that at least some were attached to Ralph Lauren gear.

Racking Polo seems to connect Skeaz Lauren to the Lo-Life tradition of stealing luxury goods, and of pushing through class barriers, or at least appearing to. Out-and-proud theft also snubs Drake’s narrative of coming up through hard work, and refuses to glorify not-having over having; it refuses to remain in a fetishised state of poverty. It sees through the promise of aspiration or perhaps more accurately, calls its bluff. It takes literally the promise that there is wealth available for those who aspire to it, and makes it into a reality that was never meant to be. If Polo is the ultimate aspirational brand, stealing is the only logical way to get it.

Sifting through Skeaz Lauren videos and the substratum of the internet that is Drake, it becomes clear very quickly that we don’t really care about authenticity. Rather, we only celebrate authenticity when it coincides with a set of identity traits that carry value. Our desire for authenticity is malleable enough that Drake can easily absorb and re-work any critiques thrown at him, massaging his past foibles—or were they strategic?—into neat narrative shape (when I saw him play Brisbane in 2015, he performed to looping footage of the lint-rolling incident). Meanwhile, Skeaz Lauren is a victim of these same malleable standards that bolster Drake’s brand. Policing authenticity, then, is a means of policing class borders. It’s about keeping people in the gutter, or in golf buggies, or out of the gutter, according to the weight given to different identities—and as usual, the scales turn out to be rigged.