Danny Brown is a polarising rapper who makes polarising music. He tends to be a “love him or hate him” kind of guy, particularly because most people only know the songs that feature his distinct, high-pitched voice, songs that pretty much focus exclusively on hoes and MDMA. His singles appeal to a pretty specific audience – those who love to party. On the other hand, many of his album tracks are completely different, and honestly they’re my favourites. While I’m a big fan of Party Danny, it’s Subdued, Dark Danny that demands my utmost love and respect. (If you listen to albums like Old and XXX, the songs are split between Party Danny and Real Danny, distinctly divided by those featuring his high-pitched lilt, and those in his gravelly, organic tone. Tracks like Torture, Lonely and Clean Up – an absolutely brilliant 3-in-a-row on Old, highly recommended for anyone whose never heard his non-single tracks – are remarkably moving and deeply personal. Of course, he pretty much never performs these live. Like I said, he’s mostly known a party rapper.)

This Tuesday, I caught Danny at his Melbourne headline performance at 170 Russell, while in town to play roving regional festival Groovin The Moo. Having had my mind blown by his set back at Splendour in the Grass 2014, I knew I was in for something high energy, heavy, exciting. While he hasn’t released any new music since 2013, I was secretly hoping he’d drop a new track, considering his new album is apparently right around the corner.

It was upsetting to hear that his Sydney and Melbourne shows had been downgraded to smaller venues (and the Perth leg cancelled entirely) but to me, it didn’t matter – I love intimate hip-hop shows. Besides, I can understand why some people wouldn’t care to buy tickets to an artist who hasn’t released anything since before his previous Australian tour.

The first opener was local rapper Baro and quite frankly, it was disappointing. I’ve seen Baro a couple times in the past, and he’s delivered fresh, powerful sets. We’ve spent some time writing about how we think he’s on the rise, ready to be a driving force in Australian hip-hop. Yet he totally missed the mark, for two main reasons. Firstly, and not his fault at all, it was a strange choice of opener as he’s a totally different brand of hip-hop; apart from his last two songs, the beats chugged along, his understated drawl and laid-back flow more stoner than party rap. Secondly, his completely nonchalant attitude really pissed me off. He lazily swung from track to track, and at one point noted that he hadn’t even prepared beforehand, having only recently found out that he was playing. He really didn’t seem like he cared to be there, noting that he and a mate he brought out with him were simply “two stoned n*ggas on a stage.” Ho-hum. While I totally get that it was just a different vibe to the Danny Brown Party Atmosphere, his obvious apathy really irked me. It’s genuinely upsetting to be so let down by an artist we’ve really been gunning for, but so it goes.

Up next was Detroit MC Zelooperz, who came out to Australia with Danny (also, the pair share the same DJ). His beats were incredible, and his huge, fiery productions immediately woke up the entire room, who were quickly getting as turnt as they could on a cold Tuesday night. Brimming with charisma and drive, he constantly bounced around the stage, engaging with the audience and having a great time. He jumped into the crowd a couple times, with a full on mosh quickly forming around him. One thing to point out however, is that his lyrics were pretty awful. Multiple songs in a row about ‘bitches on my dick’ type stuff? Zzzzz. I’m not even saying this from a feminist, stop-talking-about-bitches-and-hoes perspective, more than it’s just boring as hell and completely unimaginative. That said, his beats were phenomenal; packed with a serious punch, as heavy and aggressive as any Danny Brown hit, the crowd – myself included – were heaving. I’m looking forward to hearing more from Zelooperz over the next couple years. 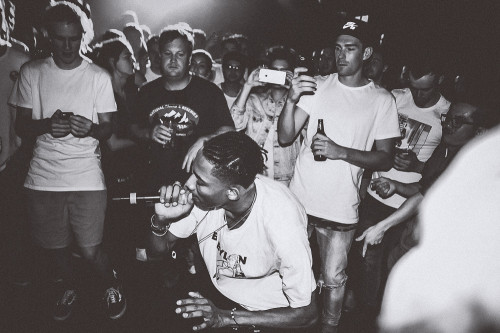 Danny took to the stage shortly afterwards, with the sweaty, churning mass of fans ready and waiting. He can command a crowd like no other; a master of live performance, he knows exactly how to get each and every person moving – and move we did. Wild-eyed and donning a band t-shirt and black jeans, he looked more rocker than rapper, an interesting contrast to Zelooperz, who shortly came back out on stage to act as Danny’s hype man.

It soon became quite clear to us that he was a little worn down. His movements, while lively, were less spirited than usual, certainly less so than the last time I saw him perform. I imagine he was just tired, so I cannot criticise this even slightly. This was his fifth show in five days, across four states – after his Brisbane headline set, he travelled to Maitland, NSW, Canberra, ACT and Oakbank, SA for three Groovin The Moos before arriving in Melbourne. Combine this with the low ticket sales, it’s no wonder he may have been feeling a little flat.

The thing is, even a flat Danny Brown show is more hyper and animated than most, and although he played a compacted 45 minute set with no encore, it was raucous and fun from start to end. His set was jam packed with his biggest tracks, including Blueberry, Smokin & Drinkin, the Purity Ring-featuring 25 Bucks, Dip, one of my personal party favourites Handstand, and his Rustie collaboration Attak. The production and beats are so explosive and lively that they carried him throughout, and the crowd had a great time in spite of the weariness.

At his best, Danny Brown is ferocious, wild, intense and exhilarating. At his worst, he’s still more energetic, fun and party-starting than others, so even a subdued performance like we saw this week still kicked ass. Fingers crossed he’ll come back with renewed vigour once his next album is out.

Read our interview with Danny Brown

Check out our full photo gallery of Danny Brown with Zelooperz at 170 Russell, Melbourne. 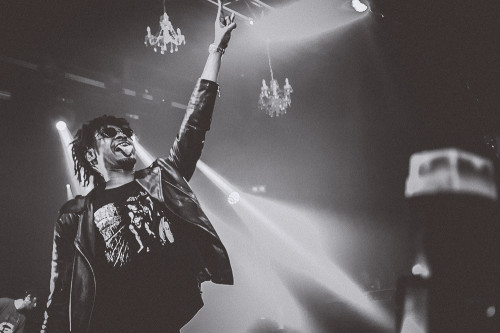