Woah woah woah! When did the noughties come back?! Looks like not only Puff Daddy’s moniker has come full circle. The artist formerly known as Puffy, P.Diddy, Diddy, Sean Combs, is back with a new video, and a new Family. The clip for the 2015 track You Could Be My Lover dropped this week, featuring Puff Daddy, Ty Dolla $ign and new Bad Boy signee Gizzle.

Beginning with a kind of fairytale narration – but one geared towards a stereotypical macho culture, as illustrated by Cribs pretty much – the start of the clip details the sheer wonder of the prince’s life after he narrowly avoids marriage. A tongue-in-cheek wonder comprised of pretty much hip-hop cliches; riding motorbikes, shooting hoops, “eating pussy”, never paying child support of alimony, dating younger women… and to top it off, he leaves the toilet seat up. All whilst wearing a Versace robe, naturally.

So far so good. The clip continues with some excellent noughties cliches; a wild LA party, and Puff, Ty and Gizzle severely outnumbered by half naked women. This is the return of denim cut offs, black underwear and white fur. Hood opulence at its finest – almost demanding viewers shout “Go shawty! It’s your birthday!” at the screen.

I’m just not sure I wanted to come back here. Reuniting the original Family is one thing, but revisiting the kind of male money fantasy that’s playing out across my screen? The opening narration sets the tone as a bit of joke, fair enough. But I don’t believe these guys are joking, and I can’t believe I’m watching another video of a nameless, vacant faced, scantily clad girl being led by the hand. It feels like Puff is flogging a dead horse here. I’m not sure the glory days are coming back – especially given that, so far, the media has surprisingly little to say about this clip. Negative or otherwise.

The Bad Boy head has announced a one night only reunion of the original Family; a live show in honour of the Notorious B.I.G. and held on his birthday, May 20. According to the release, the event will include performances from Puff, Faith Evans, Lil’ Kim, Mase, French Montana, Total, 112 and Mario Winans. New York reps Jay Z and Mary J Blige will also be on-hand to perform. 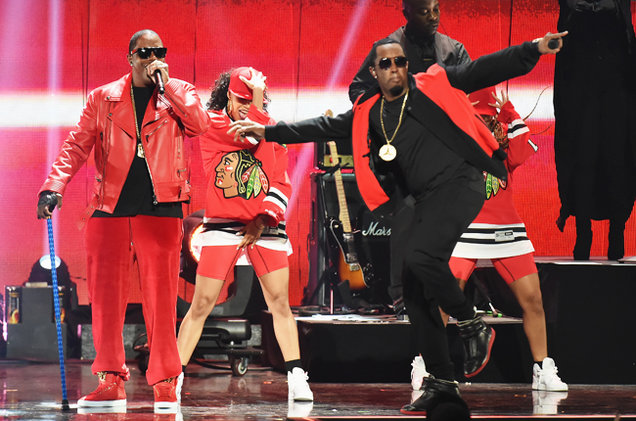 Puff has described the concert as “hip-hop history”, and even while history repeats itself, I can’t help but feel that the clip for You Could Be My Lover is reverting to a place I don’t think we want to be.