Brisbane artist Sahara Beck is on the precipice of releasing her latest album, Panacea. No stranger to the studio, this record is shaping up to be her best yet. Fresh from wowing audiences at Bluesfest, as well as picking up a Queensland Music Award for Folk Singer/Songwriter and a nomination for Song Of The Year for her song, Mother Mother.

Having released another taste of Panacea just this week with her new single, Spinning Time, it’s safe to say anticipation is at a critical level for her April 22 release date. If all this wasn’t enough still, we have now been gifted with a photo diary of Sahara Beck’s time in the studio creating what is sure to be an absolutely stunning release. Take a look for yourself below and be sure to wrap your ears and mind around Panacea come April 22. 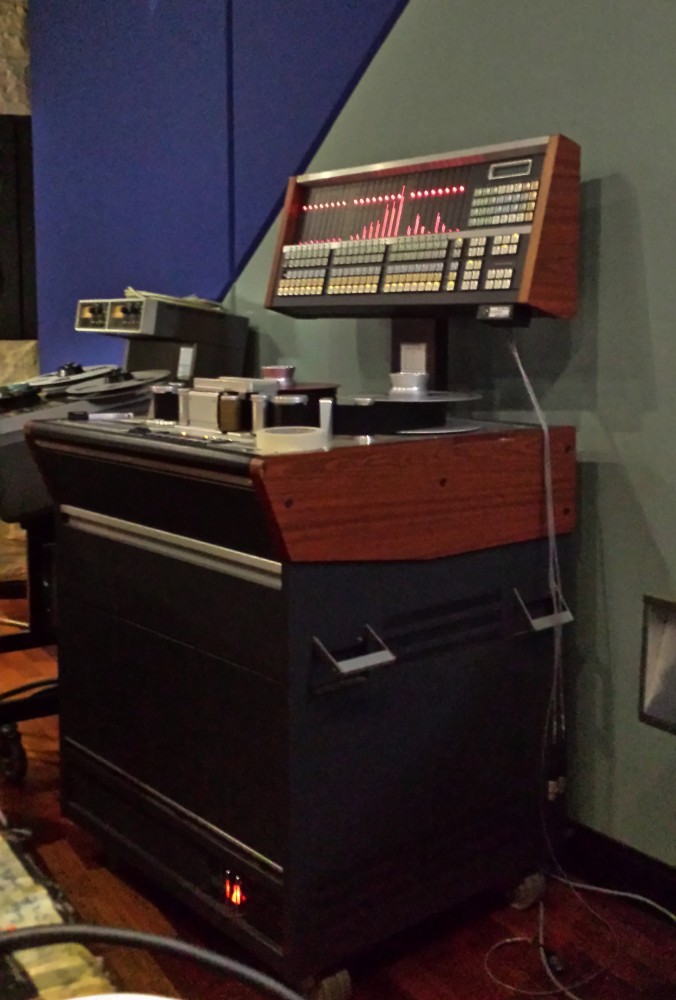 We recorded the song Mother Mother live to tape on this amazing machine. Doing it live though meant we had to nail it. I was struggling with bronchitis all through the recording process so it was a bit nerve wracking for me to record the vocals live to tape along with all the other instruments in case I would ruin it. So at the end of the day we’d jam on on the song and then decide if the mood was right and ready to be recorded –  it wasn’t until the second last night that it was ready. I remember that night we jammed on it and got it right, at which point (co-producer) Jeff (Lovejoy) said: “Alright great let’s go straight into it. Tape is rolling.” Right then my heart dropped and I felt like I’d been slapped back into reality. It took a couple attempts, but we got there. It’s funny in some parts if you listen super closely you can hear me coughing away from the mic in between lines. Far out I was SICK! 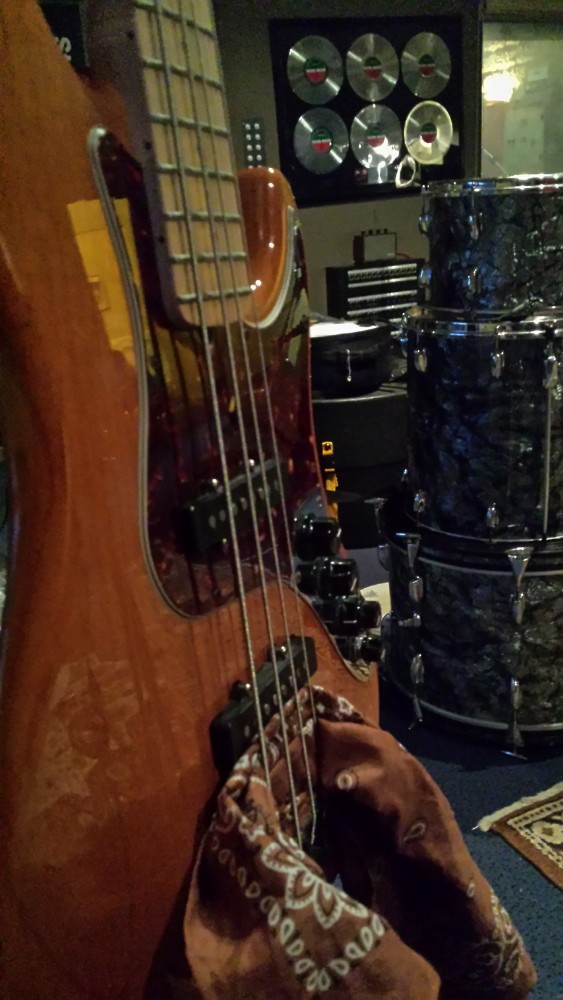 Our bass player Enzo might be a genius. I was obsessed with having a double bass sound on the track Don’t Hold Your Breath. We, of course, didn’t have a double bass so Enzo tried a bunch of different ways to play the part. In the end he just took his bandana off, stuffed it under the strings and there was the exact sound I was hearing in my head. I would never have through of doing that. 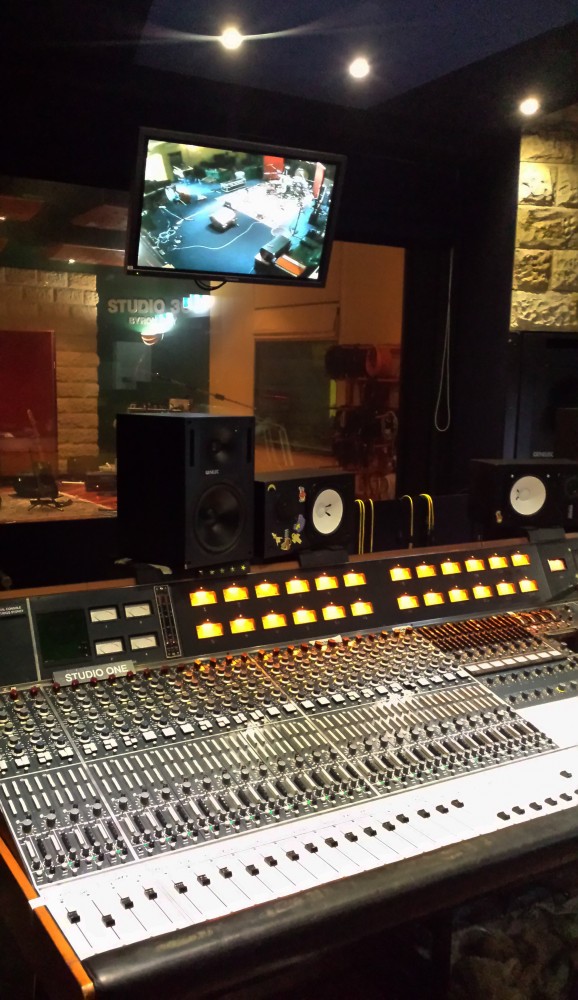 This was the desk we used to record all the first layer parts for Panacea. I thought it was so cool that you could see one of the recording rooms through a giant window in front of you and the other on a big screen TV above the desk. It was like something you would see in a movie. I remember the first time I ever came into this studio was years ago with a band called Rev Sunday, they wanted me to feature on one of their tracks. While we were recording there, Angus Stone was hanging around the studio because he was also recording one of his tracks with Jordan. I think I must have been about 15. Recording this time was bitter sweet as ours was the last album recorded at 301 through this incredible Neve. So much history in that desk you could smell it. It kind of reminded me of the advice I was given all those years ago – “Smoke a joint before you listen to the studio mix. That’s when you will tell if it’s a hit or not.” 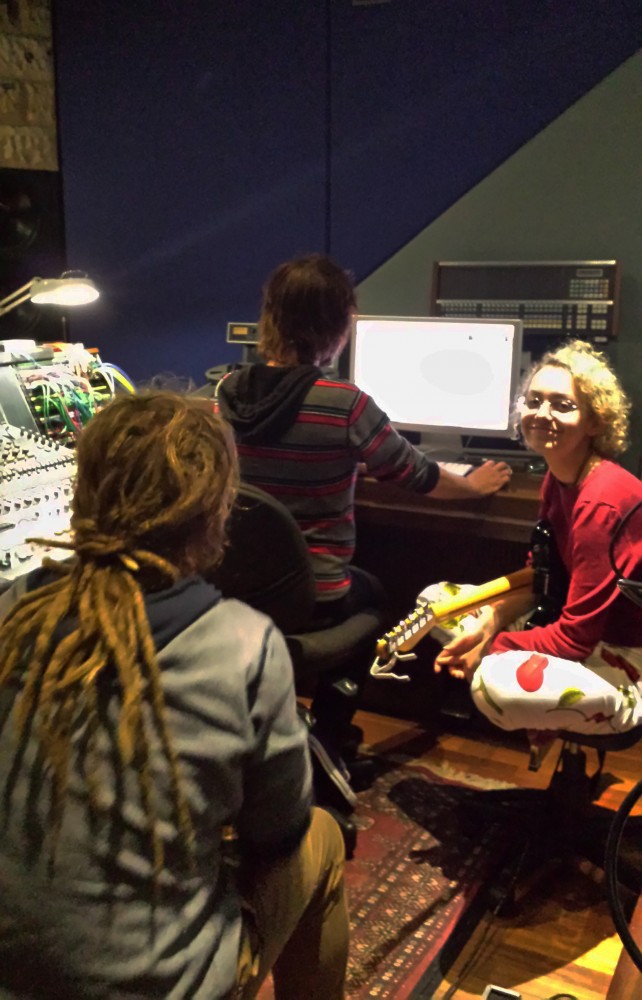 This was while we were putting down the guitars for the songs I’m in Love and Oh La La. Jeff is the biggest guitar nerd so he was so much help on these tracks with getting the right sounds. I’d like mimic the sound with “waaaaaahwaaaah” mouth movements and he’d stop and think for a moment and then a light bulb would appear above his head and he would fly across the room on his rolling chair and pick up a pedal and say, “Give this one a go”. When it comes to Jeff, you can never have too many guitars. 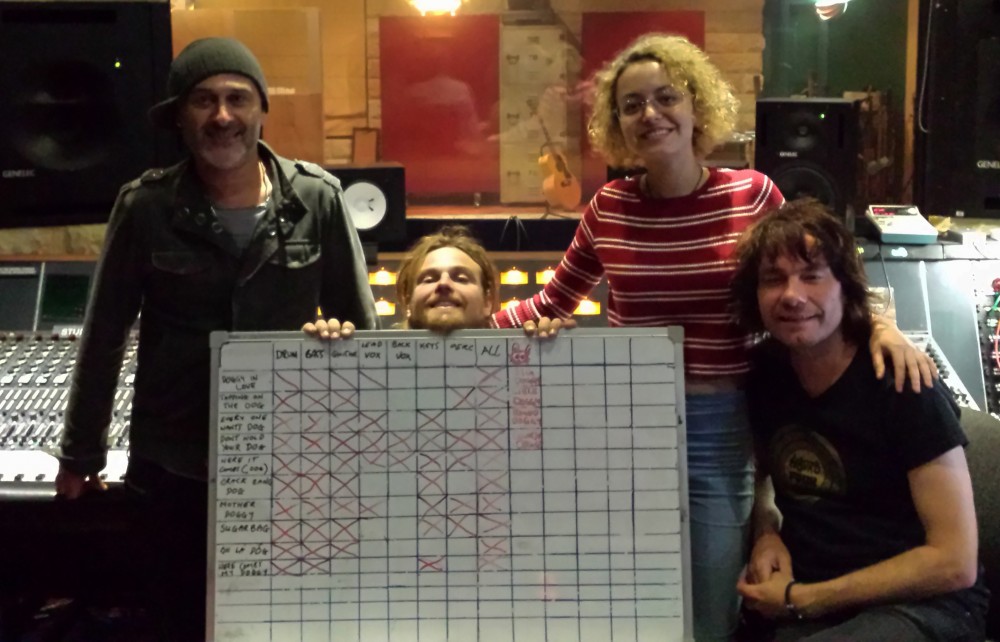 This was the chart we used to keep track of what we still needed to get done. We had gone a little studio mad and started referring to everything as Doggy or Dog. So of course DJ had to add in a column at the end of all the songs of a dog. This picture makes me laugh, all of us standing there at the end of the session with our red wine stained teeth. It was starting get all a little weird by that point. 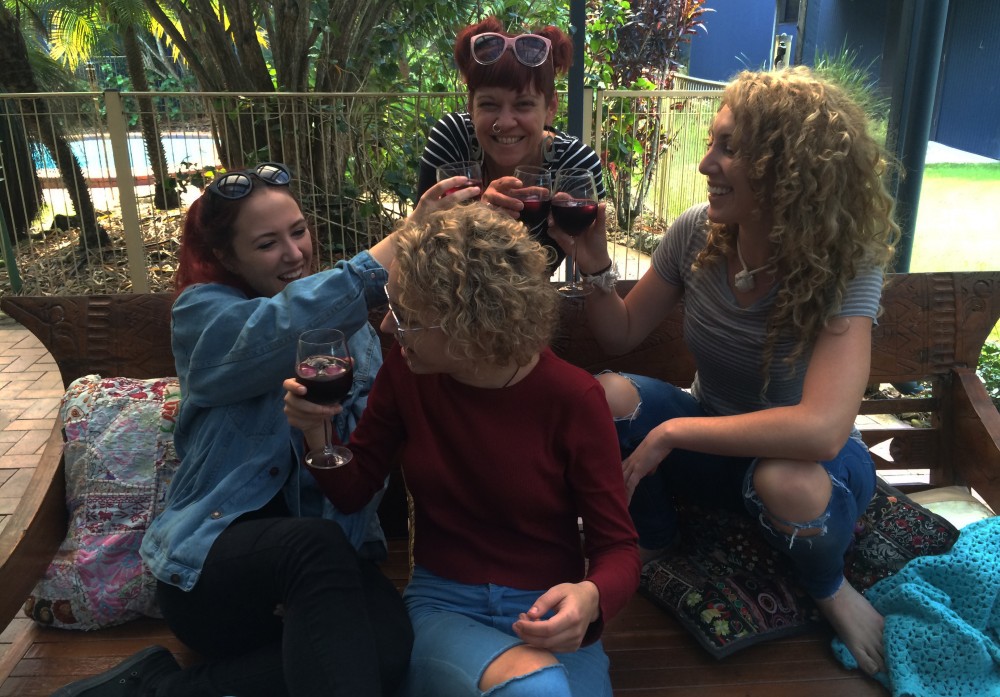 The amazing woman with the red hair and the denim jacket to my right is named Ali. I went to kindergarden with her, we grew up on the same street and we used to bring records over to each other and listen to them together. She’s been there at almost every single gig I’ve done, and she’s always been the first person I will show a new song to – which makes her the first person to tell me if it’s good or crap. Here she is sitting with us outside our studio accommodation celebrating the beginning of Panacea. Wine became something of a theme. 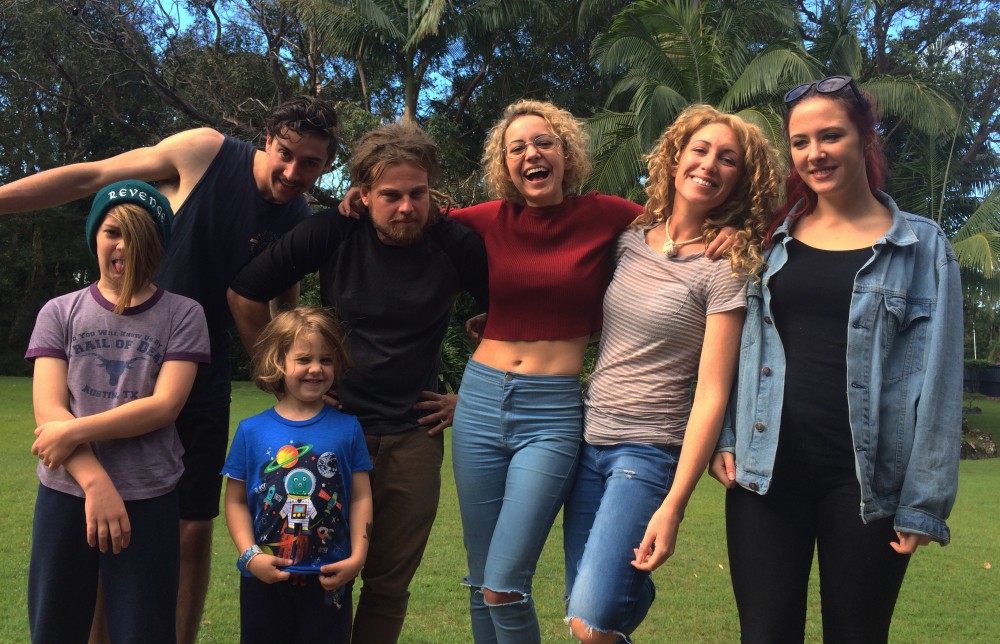 Here we are on the first day of recording at 301. The two kids are Jude and Susie, my manager’s children; they are the most inspiring little balls of energy. We were all so excited here as we had been talking about this day for such a long time. It made such a difference to know that no matter what happened, I have this beautiful extended family that will support and love me no matter how this record turned out. I remember they stayed all day as we were loading in all of our gear and then, by the end of the day when it was time for me to start recording vocals and piano for Everyone Wants Noise, my hands just weren’t doing what I wanted them to do. It was so weird, I guess all the hype and excitement just threw me off. 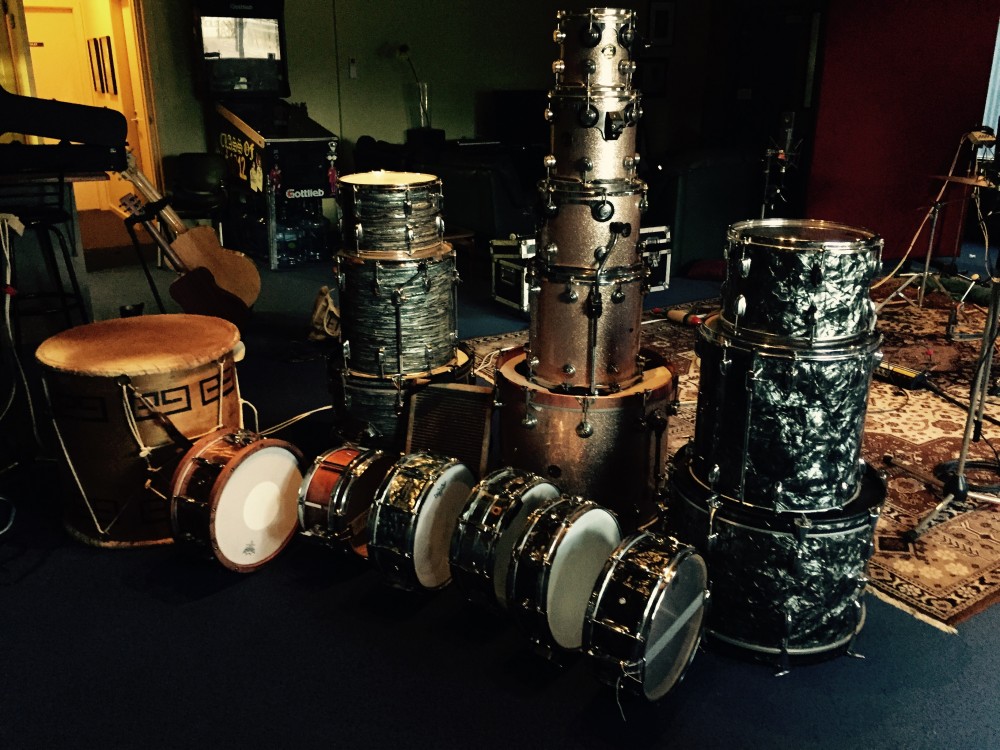 DJ was worried that we wouldn’t have enough drums. Obviously. We actually ended up bringing everything that we used in the demos including a whole lot of percussion which was basically things we found around the kitchen that we could hit. You can hear it all in the background to the song Crack Bang Bang. There was one invention I’m particularly proud – DJ poured a little bit of water into a mixing bowl and I would swirl the water by moving the bowl in around in a circular movement while he played a rhythm on the bottom of the bowl. This makes a really strange sound which was so perfect for this song. It reminded me of all those old radio broadcasts where they’d have a whole set up of weird little tools and nick nacks that would make sound effects in the background while the presenter spoke. 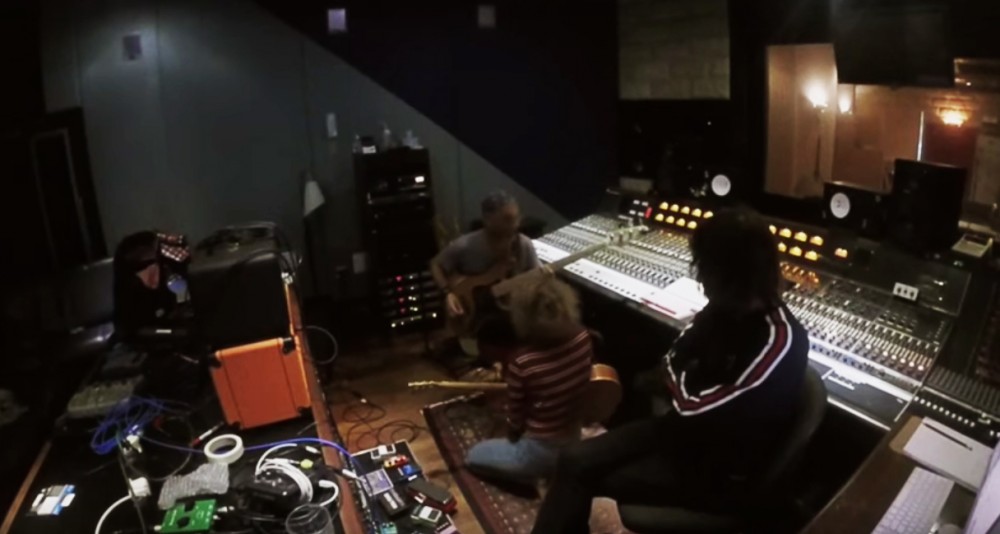 Here we are going through Enzo’s parts. He has to be one of the most laid back and talented people I know. Just someone who can pick up whatever you need as quickly as you need him to and he doesn’t get hung up on the wrong ideas. It was insanely fun – and time efficient. Double win. 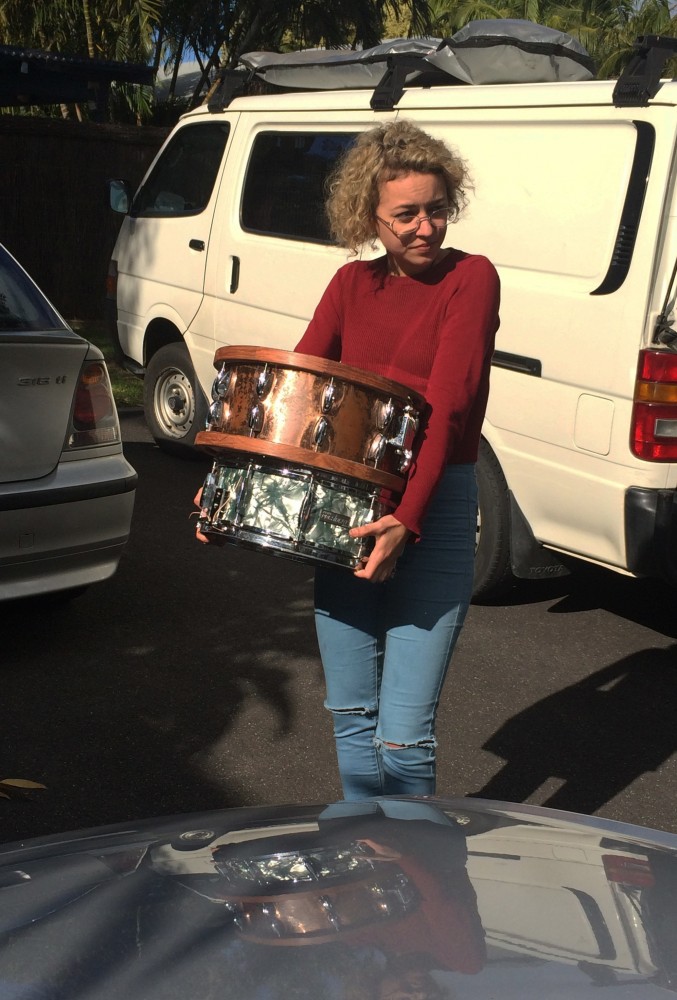 Even though I’m all squinty eyed in this photo I love it because it reminds me of the excitement of arriving at Studio 301 and loading in all our gear and getting settled in. I couldn’t be more proud of Panacea and all the people that helped me make it what it is. What a memorable week. See DJ, I do help lug all your stuff. Sometimes.